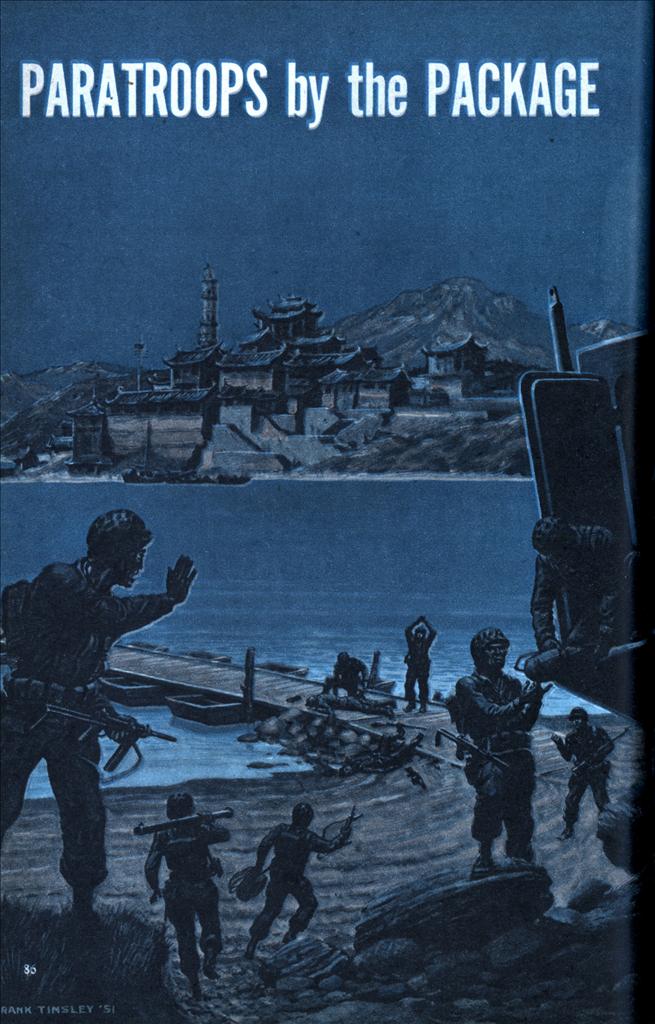 A universal-type container, along with another cargo container, recently designed by the laboratory, will be used in the newer cargo airplanes such as the Fairchild C-119. The second container has been developed for use with the overhead mon- orail of the C-119. Still in an early research and development stage, the universal container holds great promise. Besides its use as a transporter of infantrymen and equipment, engineers foresee its utilization as a complete weather station, rescue station and survival and rescue hut for Arctic use. Military Air Transport Service already is considering it as a weather station, to be dropped with men and equipment into inaccessible areas.

The container consists of a framework of tubular sections mounted atop a metal landing skid provided with plywood flooring. Four movable aluminum triangular compartments are attached to the framework. They can be arranged as a square box to carry cargo or can be rearranged to carry troops. The framework will not obstruct the exit of troops if they are forced to bail out during an emergency. It is quickly removable for easy loading and unloading.

Landing or impact deceleration is provided by four large air bags constructed much in the shape of barrels. They are fastened underneath the skid and remain completely deflated until the container is dropped from the aircraft. One-way openings in the bags permit air to rush in during descent, inflating the bags so they form a cushion to absorb most of the landing impact.

The container, which is designed to withstand a landing shock of 6 G’s, measures 96 inches square and 70. inches high. Four of the 500-pound units will fit into the C-119.

Ground operation is possible with the use of four wheels, one on each corner of the container. They are removed when the device is loaded into the aircraft and may be carried along for use after landing.

The other type of container, designed for use with the C-119 overhead monorail, has a 500-pound capacity. It can drop such equipment as small arms, ammunition, fuel and food. To land this container, an expendable 24-foot muslin parachute is used. Tests indicate a 500-pound load can be dropped safely at an aircraft speed of 175 mph. A 400-pound load can be dropped at 225 mph. Overall dimensions of the container, fully packed, are 20 by 30 by 60 inches.

Air Materiel Command engineers have not yet jumped in the revolutionary containers although indications are that the first descents will be made soon. When they do take place, it will be the first time U. S. Air Force personnel has ever descended in just an enclosure.

If the time comes when these weapons must be used, our enemies will discover that while good things come in little packages, knockout blows come in slightly bigger ones. •