Modern Mechanix
Issue: Mar, 1933
Posted in: How to, Toys and Games
Tags: smoking
No Comments on PARLOR MAGIC with CIGARETTES (Mar, 1933) 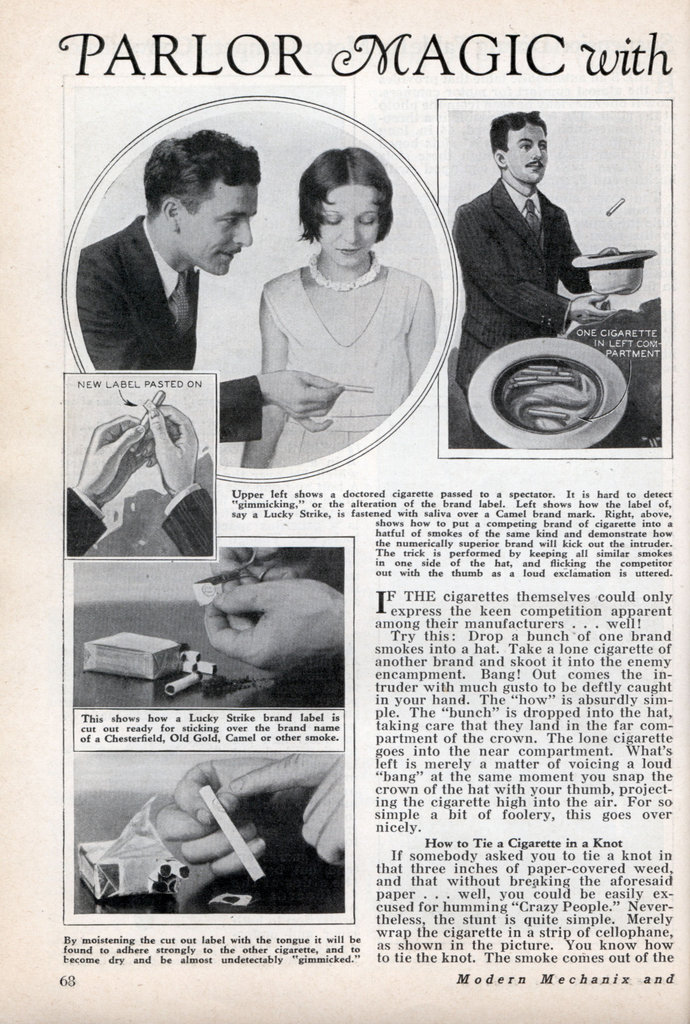 PARLOR MAGIC with CIGARETTES
IF THE cigarettes themselves could only express the keen competition apparent among their manufacturers . . .well!

Try this: Drop a bunch of one brand smokes into a hat. Take a lone cigarette of another brand and skoot it into the enemy encampment. Bang! Out comes the intruder with much gusto to be deftly caught in your hand. The “how” is absurdly simple. The “bunch” is dropped into the hat, taking care that they land in the far compartment of the crown. The lone cigarette goes into the near compartment. What’s left is merely a matter of voicing a loud “bang” at the same moment you snap the crown of the hat with your thumb, projecting the cigarette high into the air. For so simple a bit of foolery, this goes over nicely.

How to Tie a Cigarette in a Knot

If somebody asked you to tie a knot in that three inches of paper-covered weed, and that without breaking the aforesaid paper . . . well, you could be easily excused for humming “Crazy People.” Nevertheless, the stunt is quite simple. Merely wrap the cigarette in a strip of cellophane, as shown in the picture. You know how to tie the knot. The smoke comes out of the operation a bit limp but otherwise quite smokeable.

For an odd little conceit, place a Spud, a Chesterfield, an Old Gold, a Lucky Strike and a Camel in that order on a table. Use slips of paper if you like. Now, starting at the Spud end and taking the cigarettes in this orderâ€”Camel, Chesterfield, Spud, Old Gold, Lucky Strikeâ€”you can spell the name of each cigarette and always end at the brand which is being spelled. The counting â€”a cigarette for each letterâ€”goes around in regular rotation. Nice of the cigarette people to fix things up like this, eh what!

Here’s a one: Have a spectator place his hands flat on the table. Take two cigarettes. Call attention to this, “two cigarettes, an even number,” and then place the pair between any of the openings presented by the spectator’s fingers, as shown in the photo. Continue in a like manner until all but one of the openings are filled, always calling attention to “two cigarettes, an even number.” Then, take one cigarette, “one cigarette, an odd number,” and place this odd cigarette in the last opening. Now, quickly remove the pairs, taking one cigarette of each pair in your right hand and the other in your left. With the odd cigarette left on the table, hand the contents of one hand to another spectator. Then take the last cigarette and add it to your handful, saying, “by the addition of this odd cigarette, I make my pile odd while yours is even. “Right?” “Right.” Nevertheless, something magical happens, for when the smokes are counted, the performer holds the even pile while the spectator has the odds. Strange as it may seem, there is no explanationâ€”you just do it, that’s all!

Consider: You can cut the circular trade mark from a Lucky Strike, moisten it with saliva, and paste it over the Camel trade mark so that the gimmicking can never be noticed, as shown in the progressive pictures of the operation. Does that suggest anything? No? How about this: The performer takes a number of cigarettes and places them into a hat. He takes a single cigarette of another brand and places it, also, into the hat. He stirs the cigs around. When the contents of the hat are brought forth, one smoke at a time, all of the cigarettes are found to be of the same brand. Of course, no one ever guesses that the odd Lucky Strike (really the doctored Camel) is prepared. It looks so natural. Neither does anyone see you remove the trademark and roll it between your fingers, all of this being done within the hat or your pocket.

If you like manipulations, try a little sleight shown in the illustrations to the upper right. The important movement is pictured in Fig. 11, where the right hand fingers are brushed slightly over the left hand fingers, causing the cigarette to spring back into the right hand where it is retained by slightly compressing the fingers. The subsequent reproduction of the smoke from the air or the pocket needs no explanation.

Can you lift four cigarettes with a matchbox cover? And this without touching the cigarettes with your hands or pushing the smokes over the table? By placing the mouth over the open end of the upright cover and inhaling strongly, a partial vacuum can be created, sufficient to hold the cigarettes in place until the position shown in the photograph can be assumed.