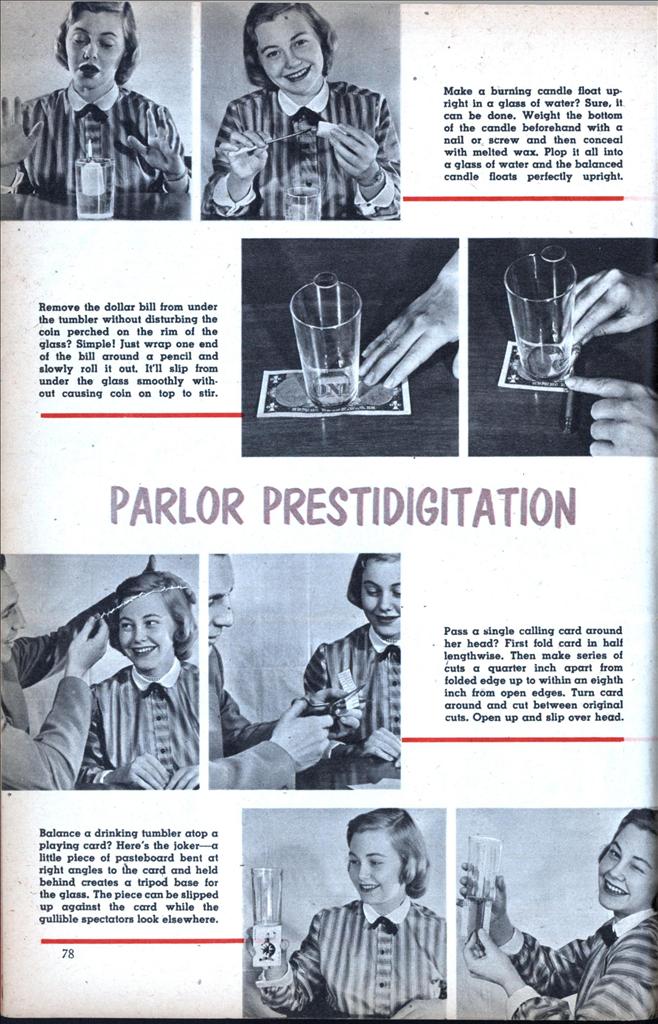 If you’ve always had a secret urge to be a houseparty Houdini, here are some simple tricks to try on the unsuspecting guests.

Make a burning candle float upright in a glass of water? Sure, it can be done. Weight the bottom of the candle beforehand with a nail or screw and then conceal with melted wax. Plop it all into a glass of water and the balanced candle floats perfectly upright.

Remove the dollar bill from under the tumbler without disturbing the coin perched on the rim of the glass? Simple! lust wrap one end of the bill around a pencil and slowly roll it out. It’ll slip from under the glass smoothly without causing coin on top to stir.

Pass a single calling card around her head? First fold card in half lengthwise. Then make series of cuts a quarter inch apart from folded edge up to within an eighth inch from open edges. Turn card around and cut between original cuts. Open up and slip over head.

Balance a drinking tumbler atop a playing card? Here’s the joker—a little piece of pasteboard bent at right angles to the card and held behind creates a tripod base for the glass. The piece can be slipped up against the card while the gullible spectators look elsewhere.

Slice an unscathed apple and find a penny inside? Well, on the unseen side of the blade a penny is fastened with beeswax. Wedge open the apple with the forepart of the blade and then wipe off the coin so it sticks to the inside of the apple after you’ve penetrated it.

Can you defy gravity by holding the knife without gripping it? As your lower hand squeezes the wrist of the other, the upper fingers open and the knife remains miraculously suspended— that is if you have your forefinger pressed against it from behind.

Make an egg stand on end without injuring the shell? All you have to do is put a little mound of salt under the table cloth before your victims come into the room. This makes a soft bed for the egg on which it can easily be made to stand when suckers are watching.

Can you make five or more boxes of matches perch one atop the other with such security that you can tilt the entire batch without spilling? It’s a cinch if you extend the inner casing of each box into the outer casing of the next one, giving the whole column of boxes a stiff bracing.