Wow. Particle detectors have gotten a bit bigger in the past 70 years or so. Check out this picture of the new ATLAS detector going online at the Large Hadron Collider in Geneva. Here’s a cool movie about it too. 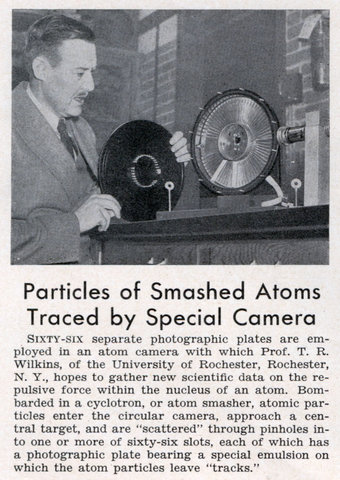 Sixty-six separate photographic plates are employed in an atom camera with which Prof. T. R. Wilkins, of the University of Rochester, Rochester, N. Y., hopes to gather new scientific data on the repulsive force within the nucleus of an atom. Bombarded in a cyclotron, or atom smasher, atomic particles enter the circular camera, approach a central target, and are “scattered” through pinholes into one or more of sixty-six slots, each of which has a photographic plate bearing a special emulsion on which the atom particles leave “tracks.”