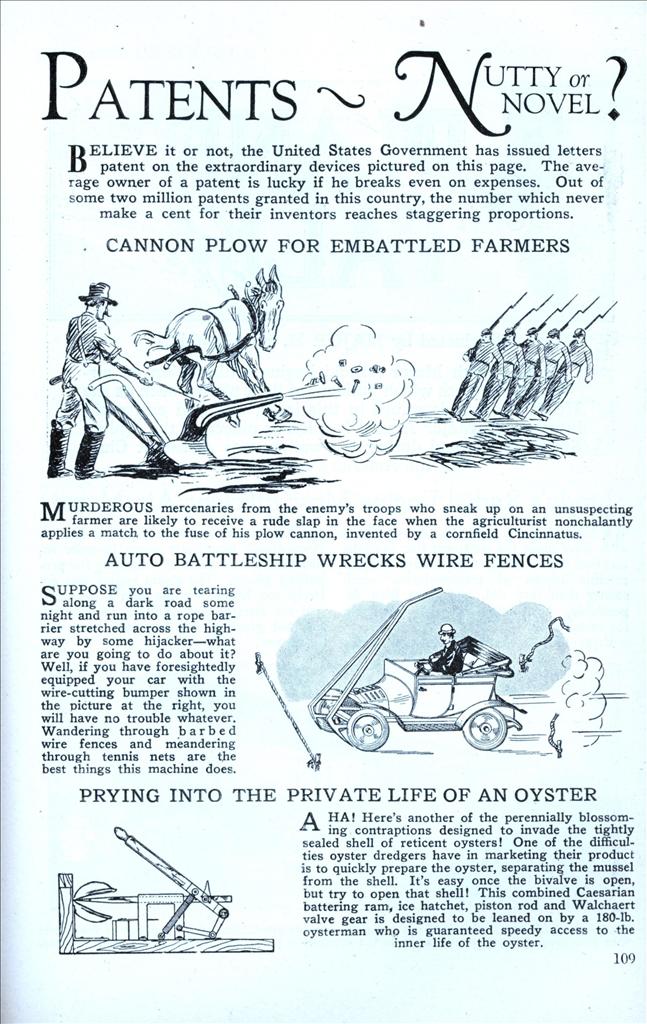 BELIEVE it or not, the United States Government has issued letters patent on the extraordinary devices pictured on this page. The average owner of a patent is lucky if he breaks even on expenses. Out of some two million patents granted in this country, the number which never make a cent for their inventors reaches staggering proportions.

CANNON PLOW FOR EMBATTLED FARMERS MURDEROUS mercenaries from the enemy’s troops who sneak up on an unsuspecting farmer are likely to receive a rude slap in the face when the agriculturist nonchalantly applies a match to the fuse of his plow cannon, invented by a cornfield Cincinnatus.

AUTO BATTLESHIP WRECKS WIRE FENCES SUPPOSE you are tearing along a dark road some night and run into a rope barrier stretched across the highway by some hijacker—what are you going to do about it? Well, if you have foresightedly equipped your car with the wire-cutting bumper shown in the picture at the right, you will have no trouble whatever. Wandering through barbed wire fences and meandering through tennis nets are the best things this machine does.

PRYING INTO THE PRIVATE LIFE OF AN OYSTER A HA! Here’s another of the perennially blossoming contraptions designed to invade the tightly sealed shell of reticent oysters! One of the difficulties oyster dredgers have in marketing their product is to quickly prepare the oyster, separating the mussel from the shell. It’s easy once the bivalve is open, but try to open that shell! This combined Caesarian battering ram, ice hatchet, piston rod and Walchaert valve gear is designed to be leaned on by a 180-lb. oysterman who is guaranteed speedy access to the inner life of the oyster.