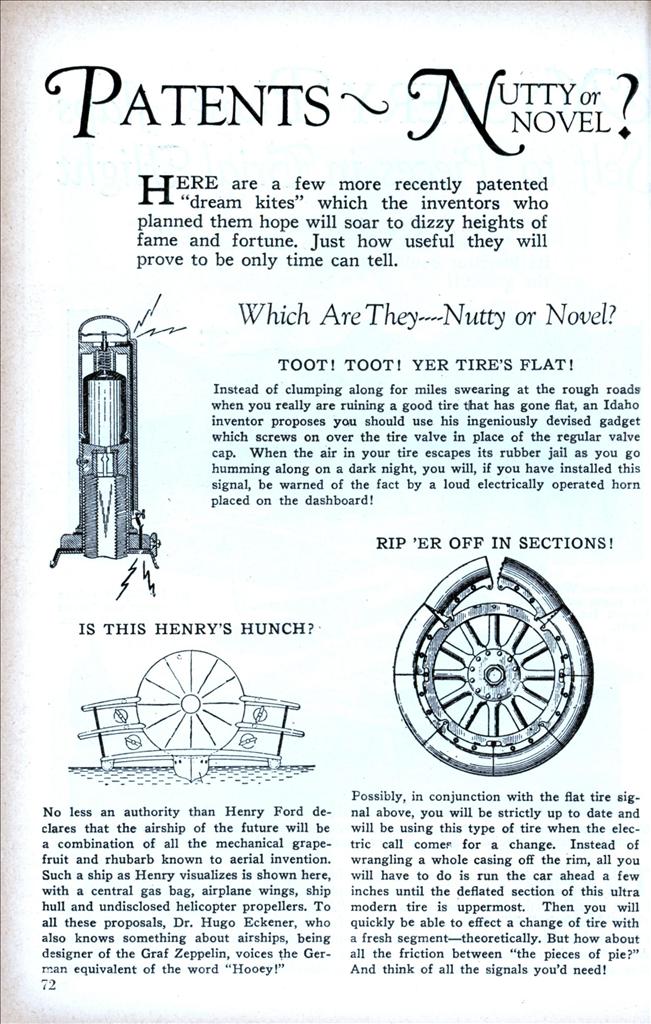 HERE are a few more recently patented “dream kites” which the inventors who planned them hope will soar to dizzy heights of fame and fortune. Just how useful they will prove to be only time can tell.

Which Are They—Nutty or Novel?

Instead of clumping along for miles swearing at the rough roads when you really are ruining a good tire that has gone flat, an Idaho inventor proposes you should use his ingeniously devised gadget which screws on over the tire valve in place of the regular valve cap. When the air in your tire escapes its rubber jail as you go humming along on a dark night, you will, if you have installed this signal, be warned of the fact by a loud electrically operated horn placed on the dashboard!

IS THIS HENRY’S HUNCH?

No less an authority than Henry Ford declares that the airship of the future will be a combination of all the mechanical grapefruit and rhubarb known to aerial invention. Such a ship as Henry visualizes is shown here, with a central gas bag, airplane wings, ship hull and undisclosed helicopter propellers. To all these proposals, Dr. Hugo Eckener, who also knows something about airships, being designer of the Graf Zeppelin, voices the German equivalent of the word “Hooey!”

RIP ‘ER OFF IN SECTIONS!

Possibly, in conjunction with the flat tire signal above, you will be strictly up to date and will be using this type of tire when the electric call comer for a change. Instead of wrangling a whole casing off the rim, all you will have to do is run the car ahead a few inches until the deflated section of this ultra modern tire is uppermost. Then you will quickly be able to effect a change of tire with a fresh segment—theoretically. But how about all the friction between “the pieces of pie?” And think of all the signals you’d need!