There is definitely a joke about mustache rides in here somewhere. 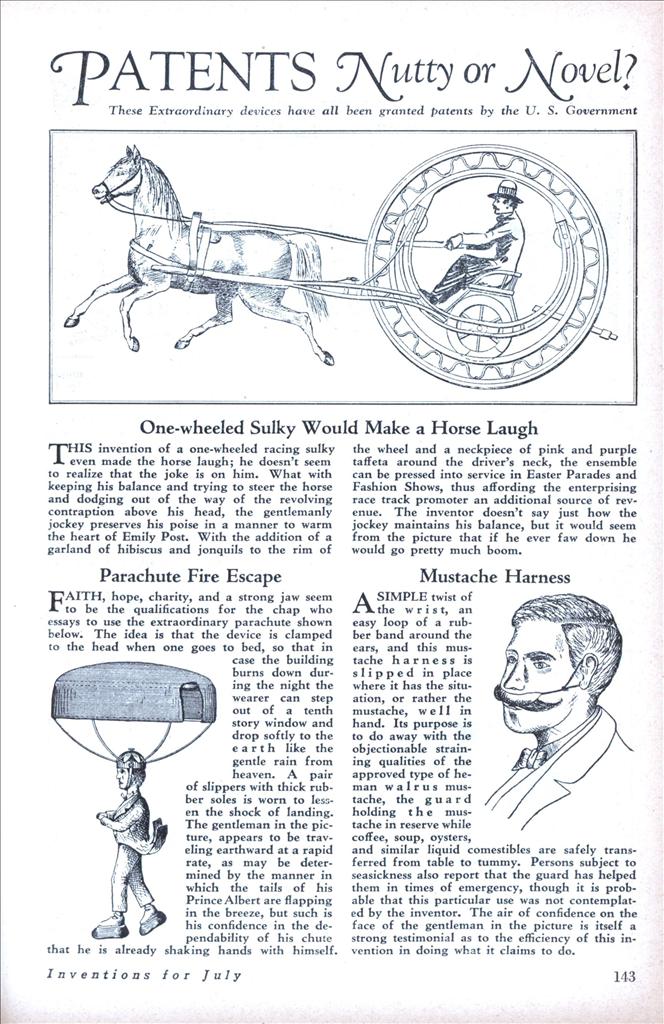 These Extraordinary devices hare all been granted patents by the U. S. Government

THIS invention of a one-wheeled racing sulky even made the horse laugh; he doesn’t seem to realize that the joke is on him. What with keeping his balance and trying to steer the horse and dodging out of the way of the revolving contraption above his head, the gentlemanly jockey preserves his poise in a manner to warm the heart of Emily Post. With the addition of a garland of hibiscus and jonquils to the rim of

the wheel and a neckpiece of pink and purple taffeta around the driver’s neck, the ensemble can be pressed into service in Easter Parades and Fashion Shows, thus affording the enterprising race track promoter an additional source of revenue. The inventor doesn’t say just how the jockey maintains his balance, but it would seem from the picture that if he ever faw down he would go pretty much boom.

FAITH, hope, charity, and a strong jaw seem to be the qualifications for the chap who essays to use the extraordinary parachute shown below. The idea is that the device is clamped to the head when one goes to bed, so that in

case the building burns down during the night the wearer can step out of a tenth story window and drop softly to the earth like the gentle rain from heaven. A pair of slippers with thick rubber soles is worn to lessen the shock of landing. The gentleman in the picture, appears to be traveling earthward at a rapid rate, as may be determined by the manner in which the tails of his Prince Albert are flapping in the breeze, but such is his confidence in the dependability of his chute that he is already shaking hands with himself.

A SIMPLE twist of the wrist, an easy loop of a rubber band around the ears, and this mustache harness is slipped in place where it has the situation, or rather the mustache, well in hand. Its purpose is to do away with the objectionable straining qualities of the approved type of he-man walrus mustache, the guard holding the mustache in reserve while coffee, soup, oysters, and similar liquid comestibles are safely transferred from table to tummy. Persons subject to seasickness also report that the guard has helped them in times of emergency, though it is probable that this particular use was not contemplated by the inventor. The air of confidence on the face of the gentleman in the picture is itself a strong testimonial as to the efficiency of this invention in doing what it claims to do.