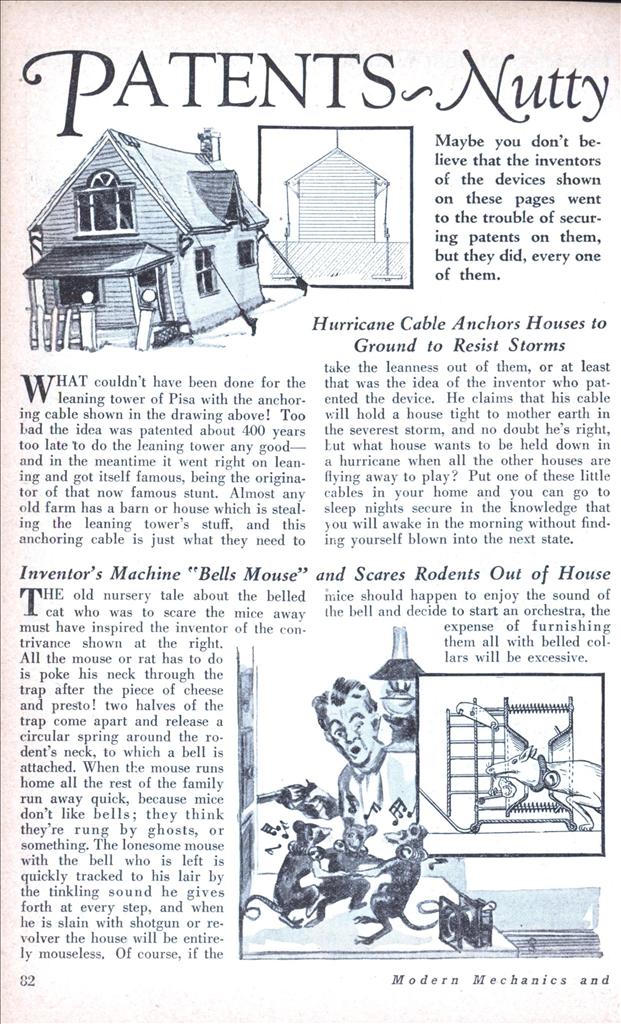 Maybe you don’t believe that the inventors of the devices shown on these pages went to the trouble of securing patents on them, but they did, every one of them.

WHAT couldn’t have been done for the leaning tower of Pisa with the anchoring cable shown in the drawing above! Too bad the idea was patented about 400 years too late to do the leaning tower any good— and in the meantime it went right on leaning and got itself famous, being the originator of that now famous stunt. Almost any old farm has a barn or house which is stealing the leaning tower’s stuff, and this anchoring cable is just what they need to take the leanness out of them, or at least that was the idea of the inventor who patented the device. He claims that his cable will hold a house tight to mother earth in the severest storm, and no doubt he’s right, but what house wants to be held down in a hurricane when all the other houses are (lying away to play? Put one of these little cables in your home and you can go to sleep nights secure in the knowledge that you will awake in the morning without finding yourself blown into the next state.

Inventor’s Machine “Bells Mouse” and Scares Rodents Out of House.

THE old nursery tale about the belled cat who was to scare the mice away must have inspired the inventor of the contrivance shown at the right. All the mouse or rat has to do is poke his neck through the trap after the piece of cheese and presto! two halves of the trap come apart and release a circular spring around the rodent’s neck, to which a bell is attached. When the mouse runs home all the rest of the family run away quick, because mice don’t like bells; they think they’re rung by ghosts, or something. The lonesome mouse with the bell who is left is quickly tracked to his lair by the tinkling sound he gives forth at every step, and when he is slain with shotgun or revolver the house will be entirely mouseless. Of course, if the mice should happen to enjoy the sound of the bell and decide to start an orchestra, the expense of furnishing them all with belled collars will be excessive.

WAY back before the day of the airplane—in 1889, to be exact—a Massachusetts inventor patented a device which he described in his application as “An Improved Aerial Apparatus for Navigating the Air and for Towing Vessels and Vehicles Over Water and Land.” The picture at the right shows the novel outfit anchored to the shore while its cables extend out over a wrecked vessel from which it is rescuing the poor sailors who ran on a rock. This is only one of the numerous jobs at which the apparatus is claimed to excel. Another use is pictured in the upper inset drawing, taken from the patent application itself, in which a trusting pair of adventurers are riding in a carriage suspended from the cables while the kites pull them across the Atlantic. Note the canoes on the bottom of the platform to keep the men afloat in case of a forced landing. Balloons on the topmost row of kites are supposed to lift the kites into the air, after which everything is in the hands of nature. One trouble with this form of navigation is that the passengers have to go in the same direction the wind blows. But the device isn’t only good for carrying passengers over water; it is supposed to tow ships, pull people over the ice on a sled, tow passengers across country on a drag, and help ship captains navigate their boats. Imagine Lindy hopping the Atlantic in one of these rigs!

PEOPLE whose conversation over telephones is more or less confined to listening, such as hubby receiving a call from friend wife, will appreciate the advantage of the patented receiver clamp shown in the pictures at left. When the receiver is lifted from its hook it is automatically held in place beside the ear by a bracket which leaves both hands free. A clerk can talk over the phone, make change, write up orders and scratch his head all at the same time with this rig. With a phonograph record to say “yes” every two minutes, this telephone is practically a perfect machine for taking long distance orders from the boss.