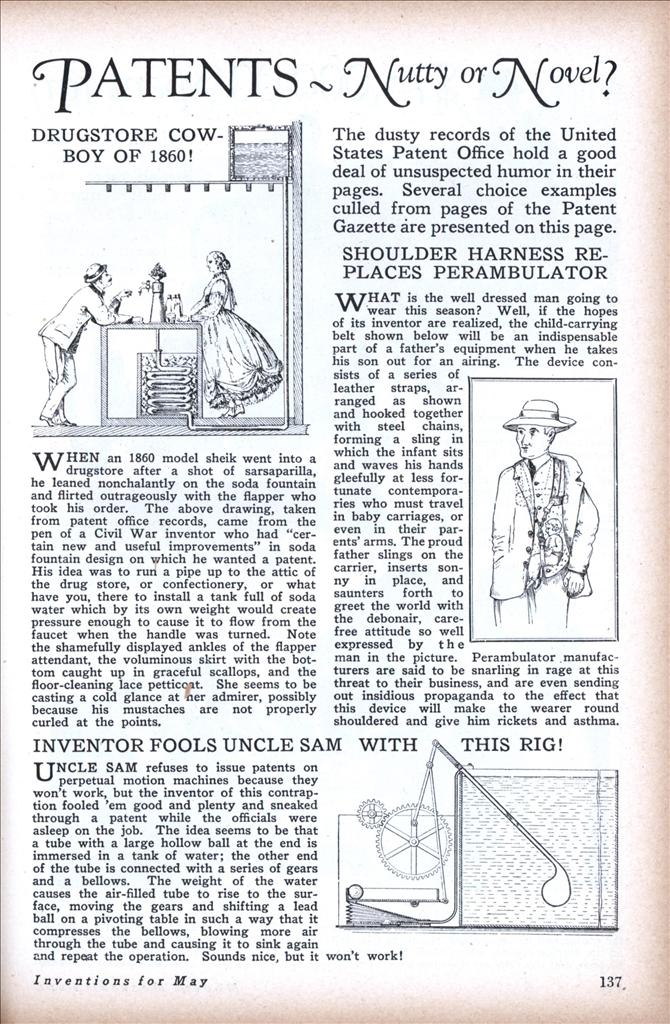 The dusty records of the United States Patent Office hold a good deal of unsuspected humor in their pages. Several choice examples culled from pages of the Patent Gazette are presented on this page.

WHEN an 1860 model sheik went into a drugstore after a shot of sarsaparilla, he leaned nonchalantly on the soda fountain and flirted outrageously with the flapper who took his order. The above drawing, taken from patent office records, came from the pen of a Civil War inventor who had “certain new and useful improvements” in soda fountain design on which he wanted a patent. His idea was to run a pipe up to the attic of the drug store, or confectionery, or what have you, there to install a tank full of soda water which by its own weight would create pressure enough to cause it to flow from the faucet when the handle was turned. Note the shamefully displayed ankles of the flapper attendant, the voluminous skirt with the bottom caught up in graceful scallops, and the floor-cleaning lace petticoat. She seems to be casting a cold glance at ner admirer, possibly because his mustaches are not properly curled at the points.

UNCLE SAM refuses to issue patents on perpetual motion machines because they won’t work, but the inventor of this contraption fooled ’em good and plenty and sneaked through a patent while the officials were asleep on the job. The idea seems to be that a tube with a large hollow ball at the end is immersed in a tank of water; the other end of the tube is connected with a series of gears and a bellows. The weight of the water causes the air-filled tube to rise to the surface, moving the gears and shifting a lead ball on a pivoting table in such a way that it compresses the bellows, blowing more air through the tube and causing it to sink again and repeat the operation. Sounds nice, but it won’t work!

WHAT is the well dressed man going to wear this season? Well, if the hopes of its inventor are realized, the child-carrying belt shown below will be an indispensable part of a father’s equipment when he takes his son out for an airing. The device consists of a series of leather straps, arranged as shown and hooked together with steel chains, forming a sling in which the infant sits and waves his hands gleefully at less fortunate contemporaries who must travel in baby carriages, or even in their parents’ arms. The proud father slings on the carrier, inserts sonny in place, and saunters forth to greet the world with the debonair, carefree attitude so well expressed by the man in the picture. Perambulator manufacturers are said to be snarling in rage at this threat to their business, and are even sending out insidious propaganda to the effect that this device will make the wearer round shouldered and give him rickets and asthma.