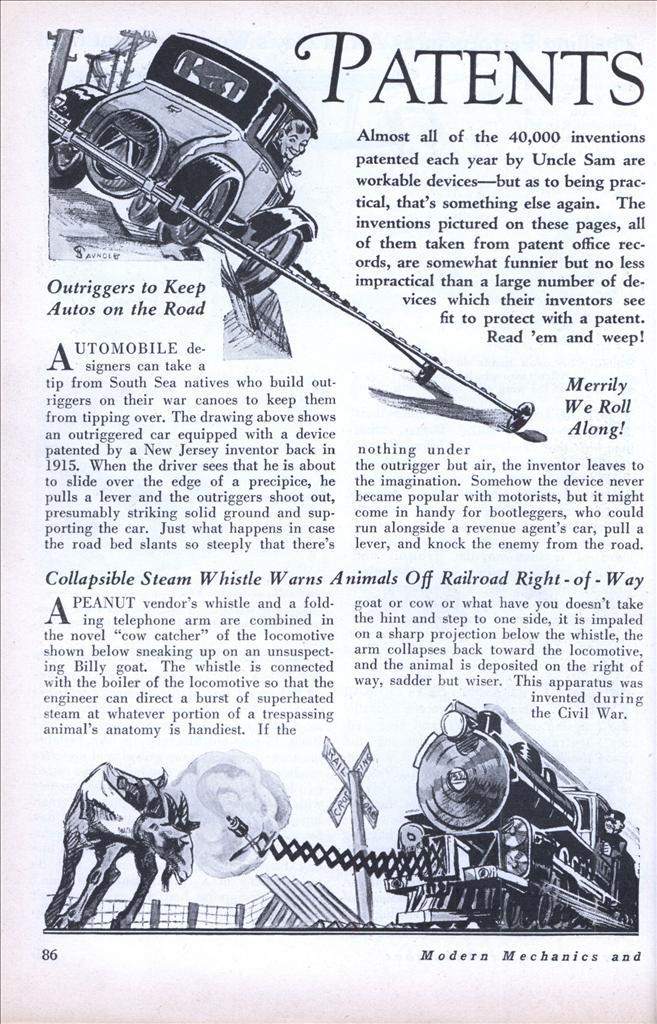 Almost all of the 40,000 inventions patented each year by Uncle Sam are workable devicesâ€”but as to being practical, that’s something else again. The inventions pictured on these pages, all of them taken from patent office records, are somewhat funnier but no less impractical than a large number of devices which their inventors see fit to protect with a patent. Read ’em and weep!

Outriggers to Keep Autos on the Road

AUTOMOBILE designers can take a tip from South Sea natives who build outriggers on their war canoes to keep them from tipping over. The drawing above shows an outriggered car equipped with a device patented by a New Jersey inventor back in 1915. When the driver sees that he is about to slide over the edge of a precipice, he pulls a lever and the outriggers shoot out, presumably striking solid ground and supporting the car. Just what happens in case the road bed slants so steeply that there’s nothing under the outrigger but air, the inventor leaves to the imagination. Somehow the device never became popular with motorists, but it might come in handy for bootleggers, who could run alongside a revenue agent’s car, pull a lever, and knock the enemy from the road.

A PEANUT vendor’s whistle and a folding telephone arm are combined in the novel “cow catcher” of the locomotive shown below sneaking up on an unsuspecting Billy goat. The whistle is connected with the boiler of the locomotive so that the engineer can direct a burst of superheated steam at whatever portion of a trespassing animal’s anatomy is handiest. If the goat or cow or what have you doesn’t take the hint and step to one side, it is impaled on a sharp projection below the whistle, the arm collapses back toward the locomotive, and the animal is deposited on the right of way, sadder but wiser. This apparatus was invented during the Civil War.

IF YOU have trouble getting up in the morning to the strains of a tinkling alarm clock, the arouser shown in action at the right will appeal to you. According to the claims of its inventor as set forth in the patent specifications, the alarm “is designed to awaken human beings from slumber in a pleasant fashion, without shock to the nervous system.” A perforated rubber tube is wrapped around the neck when retiring for the night. The other end is attached to a cup of water. At the specified time an alarm clock releases a valve which permits the water to flow through the tube, spraying the neck and shoulders like a lawn sprinkler. This is a sign that it’s time to arise. This is another invention which never succeeded commercially, although as a combination alarm clock and garden sprinkler his device had the field practically to itself. The water spurting from the alarm gives a classy effect, like Walter Raleigh’s collar.

NOW that the airplane has proved itself as a means of transportation, an inventor has come forth with a parachute suit which “fills a long felt need.” It fits around the waist and operates something after the fashion of an umbrella, being worn like a corset. Although intended primarily for the safety, if not convenience, of airplane passengers, the suit bids fair to become an essential part of the well-dressed man’s wardrobe. When spending the night in a skyscraping hotel, for instance, the suit is just the thing in case of fire. Such a thrilling use of the suit is pictured by our artist at the left. As an amusement, parachute jumping will come into its own now that it is so convenient to use one. Think of the fun in thrilling your friends by jumping out of a twenty-story windowâ€”and imagine your embarrassment if the darn thing failed to work! Like all good suits, the parachute must be tailor-made to suit the individual. A chute intended for a 90-pounder might not work so well for a 300-pound heavyweight!