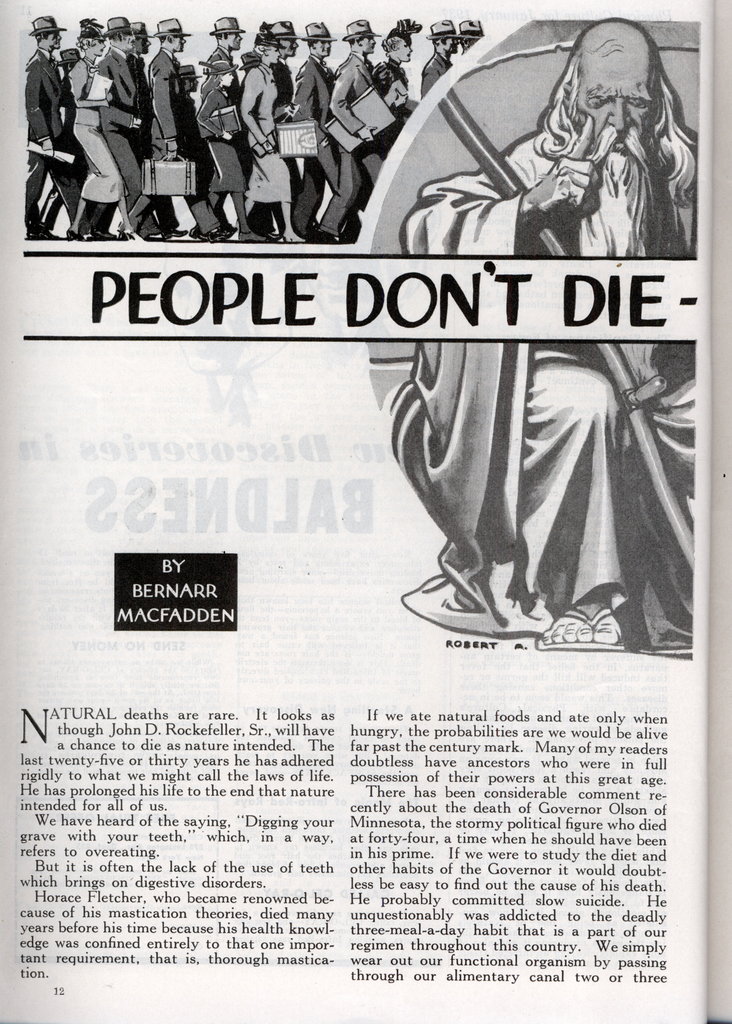 NATURAL deaths are rare. It looks as though John D. Rockefeller, Sr., will have a chance to die as nature intended. The last twenty-five or thirty years he has adhered rigidly to what we might call the laws of life. He has prolonged his life to the end that nature intended for all of us.

We have heard of the saying, “Digging your grave with your teeth,” which, in a way, refers to overeating.

But it is often the lack of the use of teeth which brings on digestive disorders.

Horace Fletcher, who became renowned because of his mastication theories, died many years before his time because his health knowledge was confined entirely to that one important requirement, that is, thorough mastication.

If we ate natural foods and ate only when hungry, the probabilities are we would be alive far past the century mark. Many of my readers doubtless have ancestors who were in full possession of their powers at this great age.

There has been considerable comment recently about the death of Governor Olson of Minnesota, the stormy political figure who died at forty-four, a time when he should have been in his prime. If we were to study the diet and other habits of the Governor it would doubtless be easy to find out the cause of his death. He probably committed slow suicide. He unquestionably was addicted to the deadly three-meal-a-day habit that is a part of our regimen throughout this country. We simply wear out our functional organism by passing through our alimentary canal two or three times the amount of food required for nourishing the body.

Over-work will destroy any part of the organism. Even a machine made of the finest steel can be over-worked and its life materially shortened.

Practically every sickness, almost regardless of its nature, can be traced to wrong habits of life which in nearly every instance are largely associated with our eating habits.

It will probably amaze some of our readers when I say that in the last forty years, thirty years or more being devoted to very intensely active business life, I have not been absent from business on account of illness for even a half day. This statement can be verified by any of the old-time executives in the Macfadden organization. And during this period I have been attacked by the usual ailments that people have when they are careless in their eating and exercising habits.

And I will have to admit that I am careless at times. To follow a rigid regimen at all times is difficult. You are bound to deviate on occasions. But after living a physical culture life for a long period you are able to recognize the symptoms of possible physical troubles and guard against them by following the policy that “A stitch in time saves nine.”

When we fail to take proper care of our bodies, fail to follow the dietetic rules essential in building health, we are committing slow suicide—we are wearing out our internal organism, and we not only lose the spirit of youth, become old before our time, but pass into the Great Beyond prematurely by many years.