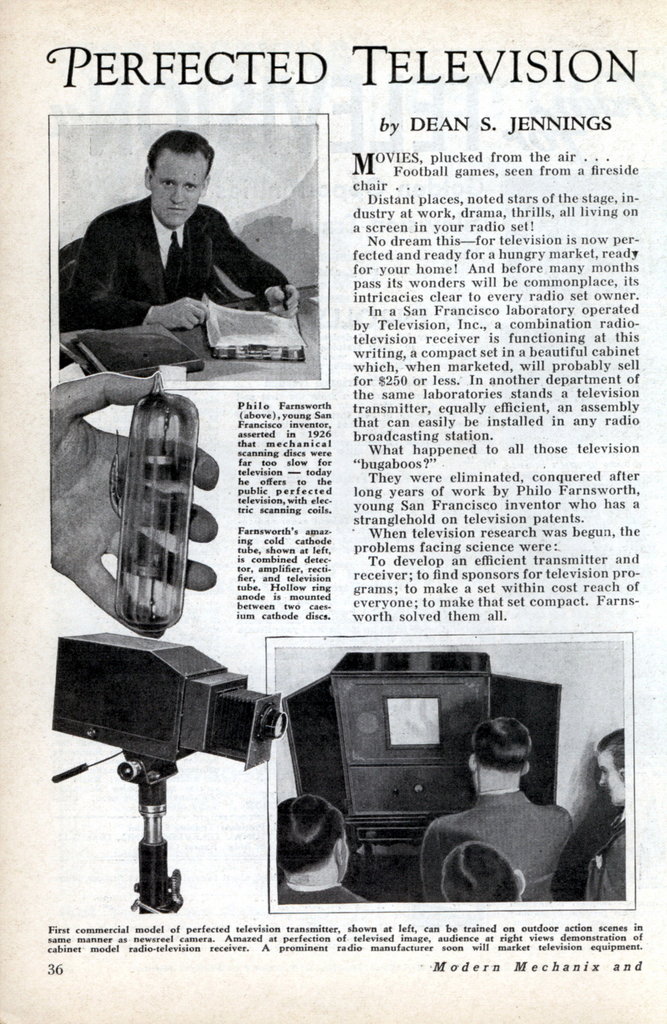 Distant places, noted stars of the stage, industry at work, drama, thrills, all living on a screen in your radio set!

No dream thisâ€”for television is now perfected and ready for a hungry market, ready for your home! And before many months pass its wonders will be commonplace, its intricacies clear to every radio set owner.

In a San Francisco laboratory operated by Television, Inc., a combination radio-television receiver is functioning at this writing, a compact set in a beautiful cabinet which, when marketed, will probably sell for $250 or less. In another department of the same laboratories stands a television transmitter, equally efficient, an assembly that can easily be installed in any radio broadcasting station.

What happened to all those television “bugaboos?”

They were eliminated, conquered after long years of work by Philo Farnsworth, young San Francisco inventor who has a stranglehold on television patents.

When television research was begun, the problems facing science were:

To develop an efficient transmitter and receiver; to find sponsors for television programs; to make a set within cost reach of everyone; to make that set compact. Farnsworth solved them all.

I have just finished an inspection trip of Television Laboratories in San Francisco.

There, from a chrysalis of wires, transformers and tubes has emerged the finished television set. It is a set soon to be turned out by one of the nation’s foremost radio manufacturers. We sat in a darkened room, watching the polished walnut cabinet with its glass “screen,” chatting with Chief Engineer A. H. Brolly.

“I’ll be back in just a second,” he said, leaving the room. And he wasâ€”on the screen! We saw him sitting in a chair in another part of the building, we heard him talking, clearly, crisply.

The image was sharply defined, a shimmering green vision twelve by fifteen inches in size. This was perfected television, using the type of set you will have in your home. The image was broadcast from a transmitter available now to radio broadcasters. By the time the receiver is marketed, it can be used in a room in which there is even greater illumination than ordinary daylight.

George Everson, secretary of the corporation, believes television will find more sponsors than the present type of radio program. In fact, he revealed, one of the country’s largest department stores has already asked for the “privilege” of backing the first commercial broadcast by Television Laboratories.

“Advertising men are tremendously interested,” Everson said. “Television opens a great new field; there will be a grand scramble when it gets started. There was a similar hectic situation when Warner Brothers astonished the movie world with the first talkie.”

Radio is now turning to the ultra short waves, according to Farnsworth and Everson.

Present radio channels, of course, are overcrowded. Eventually the whole industry will operate on short waves that are easily handled and less trouble in tuning. Television requires a broad wave band, but its present active radius does not compare with that of ordinary radio.

A television program from San Francisco, for instance, would go out on a focused beam for a distance of from thirty to fifty miles. Relay stations, scattered at certain points like airplane beacons, would pick up the beam and re-broadcast it.

“Even the motion picture industry will benefit from television,” Everson explains, “because there will be a need for numerous short films for broadcast to homes. Manufacturers will find television a faithful servant in presenting images of their products. An auto maker could, for example, show millions of motorists how his car is constructed.

“Portable television transmitters, weighing not more than ninety pounds, can be built for airplanes or submarines, with telescopic lens for news photos, maps, war-time scouting. And naturally, radio programs become more effective if performers are visible.”

In 1926 men in four laboratories, Dr. Ives of American Telephone & Telegraph, Dr. Alexanderson of General Electric, Baird of England., and Jenkins of Baltimore, were struggling with the problems of television. At that time Farnsworth said to Everson:

“They are trying to achieve television by mechanical scanning discs. I believe the speeds involved are too great for this method, and that nothing of a mechanical nature can accomplish the purpose.”

Farnsworth was then pioneering with photo-electric cells and cathode ray tubes. Today many other experimenters have followed his footsteps.

The Farnsworth set operates somewhat in this manner:

The picture to be transmitted is focused on a caesium coated silver surface within a lube. Each point in the picture gives off electrical impulses comparing in intensity to the lights and shadows of the picture. These charges, which are really flows of electrons, are focused by a solenoid which surrounds the tube. Alternating current scanning coils cause the electrical image to oscillate across a pin-point opening in the anode. The electron images coming through the hole are picked up and amplified in Farnsworth’s new “cold cathode” tube.

Multiplication of current is so intense that pictures or subjects can be picked up in almost any light, eliminating the necessity of Kleig or other artificial light for studio broadcasts. The transmitter has powers similar to that of the candid camera.

The outgoing picture waves are brought into the television receiver through an “electron gun,” a cathode ray tube. The set also picks up a synchronizing “pulse” to keep the receiver in step with the transmitter. The process, from the layman’s view, is really a reversal of the broadcast.

Scanning currents in the receiver sweep the cathode tube ray back and forth, the constant sweep building the visible picture on a fluorescent screen. The television picture is truly a quilt of quivering rays which, controlled, merge into a steady pattern.

Farnsworth has developed tubes that give an original picture nine inches square; a magnifying lens, such as he has placed on one receiver, makes it even larger.

Television Laboratories waited patiently for a year before announcing perfection of the apparatus. In the interim Farnsworth was busy with the “cold cathode” tube, a tube without filament or grid, to serve as the final link.

“We did not wish to make public any development that was not practical or foolproof,” Everson said.