Popular Mechanics
Issue: May, 1924
Posted in: Aviation
No Comments on Perils Faced in Around-World Flight (May, 1924)

Perils Faced in Around-World Flight (May, 1924) 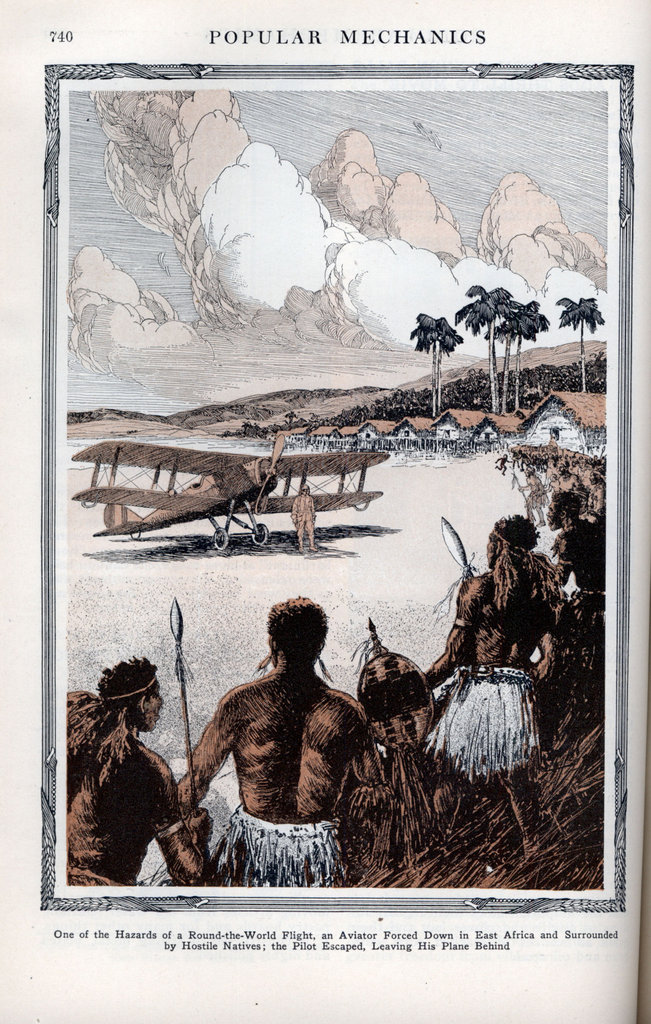 UNDER the imaginative pen of Jules Verne, Phineas Fogg went entirely around the world in eighty days, using boats, trains, elephants and even a sail-equipped sled. On the home stretch he burned’ the furnishings of his ship for fuel. But these difficulties pale into insignificance when compared with the hazards of the feat proposed by the United States armyâ€”a round-the-world flight by a fleet of airplanes, American designed and built throughout. “The United States,” said Maj. Gen. Mason E. Patrick, chief of the air service, “has the distinction of holding every air record of value, including speed, altitude, endurance and distance, and now has conceived a project rivaling in importance the circumnavigation of the globe by Magellan. The four planes to make this flight will demonstrate the feasibility with which aerial communication may be established between continents. Much valuable information will also be obtained concerning the operation of the present type of aircraft in the various climates of the world.” Starting from San Diego, Calif., the aviators will fly direct to Seattle, where they will hop off on the first leg of the approximately 39,000-mile voyage over the air lanes of twenty-two countries. Roaring northward along the coast of Canada and southern Alaska; across the Aleutian islands; down through Japan; across India; up the Persian gulf; across Turkey and Europe to England; thence to Iceland and Greenland and southward to the Canadian border, it is hoped the planes will escape the rainy season in the United States and India and will complete the journey by August or September. The four American planes will be all metal, have a wing spread of fifty feet, a speed of 175 miles an hour and a radius of 2,500 miles. They will carry 800 gallons of gasoline, fifty gallons of oil and be able to stay aloft twenty hours. The longest continuous flight necessary on the voyage will be from Attu to the Kurile islands, a distance of 700 miles. Other long hops will be required over the Atlantic ocean between the Faroe islands and Iceland and Greenland, and between Greenland and northern Canada. It is expected that, before the journey is completed, each airplane will have changed motors three times.

Climatic conditions will be one of the greatest hazards encountered and a glance at the proposed itinerary indicates what may be expected. From the arctic weather of Greenland and Iceland to the deserts of Arabia and Asia Minor is a long jump, climatically speaking, and one that will offer no end of difficulty. Favorable landing fields are few and far between. From the northern boundary of the United States to Nome, there lies about 2,000 lineal miles of the most repelling country that could be crowded together anywhere on the face of the globe. Deep canyons, mighty glaciers, timber-covered mountain ranges and snow-topped peaks form a terrain of marvelous beauty, but one which evokes no cry of admiration from a bewildered pilot looking down for some possible spot to set his “crate.” A “milk-bottle” atmosphere, however, is probably the greatest danger the fliers will face.

It contains frost and fog which blot everything from sight except the nose of the plane, the tail and each wing tip. The Venturi tube of the air-speed indicator becomes frosted inside, and, therefore, does not give a correct dial reading. Flying through snow is easier than flying through rain. Although safety always lies in height in the air, in flying over strange country every pilot strives to keep within sight of the ground, or under the cloud “ceiling.” If he goes above the clouds, he often loses all sense of direction. Also, having risen above the clouds, it is necessary to come down through them, and as the mist may be clinging to the ground or mountainside, a “crash” results before the pilot realizes his position. Although comparatively little data has been gathered as to weather conditions in the tropica, the only unexplored airway that the round-the-world fliers will encounter is between the Pacific ocean and the South China sea. What is known as the “Typhoon Triangle” has the China sea, Manila and Hongkong for its points. It is hoped, however, that by seeking an elevation of from one to two miles, the aviators will be able to ride above any such disturbances. Between India and Damascus the pilots will use the air-way established by the British to assist in keeping in close touch with their far-flung empire. This does not mean that the country from the azure Indian ocean to Europe’s smooth fields is conducive to free and easy flying, however. Impenetrable jungles, rock-scarred mountains, a jagged coast line and sun – beaten deserts, the shifting sands of which are infrequently trod by the clumsy feet of camels traveling in caravan, offer nothing but danger and perilous solitude to winged strangers. Crossing Europe should entail no great hardship after the problems of Asia have been solved. Scandinavia will be the jumping-orr” place and there three long over-water flights will face the pilotsâ€” Norway to Iceland to Greenland to northern Canada. No doubt, extensive overhauls and repairs will be made before the dash for America is started, for to flounder into the frigid waters of the Arctic sea after covering every conceivable kind of territory would be a tragic climax not to be risked at a critical stage of the journey.

Regardless of the outcome of the attempt, it is bound to mark a new epoch in the conquest of the air by man. It was only a few years ago that the entire world was interested in the attempt of British aviators to fly across the Atlantic. News-papers were filled with stories of the successful flight across the Atlantic of the United States navy’s NC-4, which was hailed as the acme of aviation achievement. Ten years ago, almost to a day, the British channel was crossed by an airplane piloted by Louis Bleriot for the first time to win a coveted prize put up by a great newspaper. The barking challenge from Bleriot’s tiny, twenty-two horse-power motor was taken up and the answer came a decade later in the spanning of the Atlantic, the non-stop record flight of Lieutenants Kelly and MacReady, of the United States army, from New York to San Diego and the achievement of Lieut. Williams, U. S. N., in roaring through space at a rate of speed hitherto unknown in the checkered history of transportation. In 1915, a round-the-world flight was proposed as part of the Panama-Pacific Exposition, but scientists then deemed it “impossible of accomplishment in this generation” Many years previously, Benjamin Franklin, when asked his opinion of a balloon ascension in France, wisely replied: “Of what use is a new born babe?” And so, if the present attempt to circle the globe succeeds, America surely will have every right to her champions, for it was their progenitors who timidly tested the same winds, ventured aloft on the same air currents and crashed on the same soilâ€”the Wrights, Curtiss, Langley, Chanute and a host of others.

America, however, will not achieve the honor of being the first to circumnavigate the earth without a battle, for both Great Britain and Portugal have been preparing for months for similar attempts. The latter country will use Fokker monoplanes with a wingspread of about sixty-five feet and a capacity for carrying a useful load of 3,000 pounds at a speed of 110 miles an hour. Several previous attempts to encircle the earth have been made by the British and French, but without success. Supplies for the army fliers will be shipped from the United States to various points on the route and pathfinders will cover each section of the flight. For flights over the ocean, planes will use pontoons.