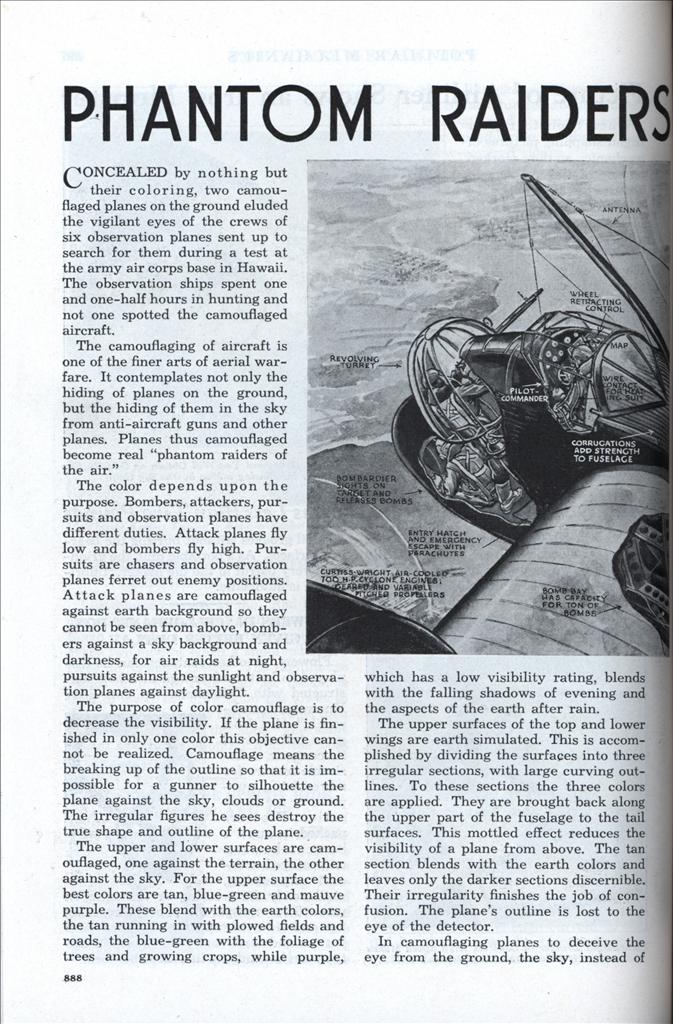 The camouflaging of aircraft is one of the finer arts of aerial warfare. It contemplates not only the hiding of planes on the ground, but the hiding of them in the sky from anti-aircraft guns and other planes. Planes thus camouflaged become real “phantom raiders of the air.”

The purpose of color camouflage is to decrease the visibility. If the plane is finished in only one color this objective cannot be realized. Camouflage means the breaking up of the outline so that it is impossible for a gunner to silhouette the plane against the sky, clouds or ground. The irregular figures he sees destroy the true shape and outline of the plane.

The upper and lower surfaces are camouflaged, one against the terrain, the other against the sky. For the upper surface the best colors are tan, blue-green and mauve purple. These blend with the earth colors, the tan running in with plowed fields and roads, the blue-green with the foliage of trees and growing crops, while purple, which has a low visibility rating, blends with the falling shadows of evening and the aspects of the earth after rain.

The upper surfaces of the top and lower wings are earth simulated. This is accomplished by dividing the surfaces into three irregular sections, with large curving outlines. To these sections the three colors are applied. They are brought back along the upper part of the fuselage to the tail surfaces. This mottled effect reduces the visibility of a plane from above. The tan section blends with the earth colors and leaves only the darker sections discernible. Their irregularity finishes the job of confusion. The plane’s outline is lost to the eye of the detector.

In camouflaging planes to deceive the eye from the ground, the sky, instead of the earth, is the background to be filtered against. Flying against the blue sky, a plane presents a solid silhouette. To blot out its visibility to anti-aircraft gunners on the ground, burnished aluminum, light blue, light purple and white are used. The aluminum reflects light and brightens the under surface. The white assists in this while the light blue and light purple carry out the sky dissimulation. The under surface combinations are put on in small areas which, quite remarkably, blend into a solid color at heights of half a mile. This has the effect of lightening the under surfaces of the plane when projected against the background of the sky. Shadows, formed by the wings on the fuselage, are taken care of by brightening the plane at this point with aluminum finish. The landing gear is touched up also.

Planes so treated become invisible at heights of 10,000 feet. Those not treated are visible at 17,000 feet. This means decreasing the service ceiling of the plane through camouflage by 7,000 feet. At this lower ceiling greater weight can be carried and the plane really looks as if it were at the higher altitude—a fact which fools the anti-aircraft gunners. Bombers are also black-winged for night raiding.

A novel method of hiding war planes, although leaving them ready for instant use, has been developed by a French engineer, Henri Lossier, and Faure-Dujarric, an architect. Their plan is a huge concrete tower with circular housing platforms.

These platforms would be covered and divided into crypts, each of which would care for a plane. One hundred or more planes could thus be housed, the planes being lifted to their respective positions by elevators. The planes thus housed would be like great eagles, hidden from view and protected by covering, but ready, at an instant’s notice, to attack.

This mass of concrete would be 6,500 feet high. The three platforms enveloping it would be built at 2,000, 4,000 and 6,000 feet. They would project 500 feet out from the side of the column. Runways would be established from them to the center of the column where the planes would be delivered by elevators. The column would be 700 feet in diameter at the base and 130 feet at the top. The great value of such a tower lies in the fact that planes would not need to climb to the respective heights of the platforms before beginning combat.

Future air tactics for the United States call for the concentration of an air fleet at various camps throughout the country, available on instant notice for combat, either defensive or offensive. In event of war, however, the planes would scatter, rendering it impossible for the fleet to be attacked as a whole. Camouflaged, they would rest in some far corner of a commercial field by night, only to rise with the dawn and, hidden by their many colors, to go forth to the attack.

Phantom fleets also are being concealed by governments in underground air bases. There are reports of such a base at Singapore, the orient base of the British navy, and of another at Vladivostok, the great Russian fighting base. Here all the war paraphernalia of the air is kept and secret battle plans are formed.