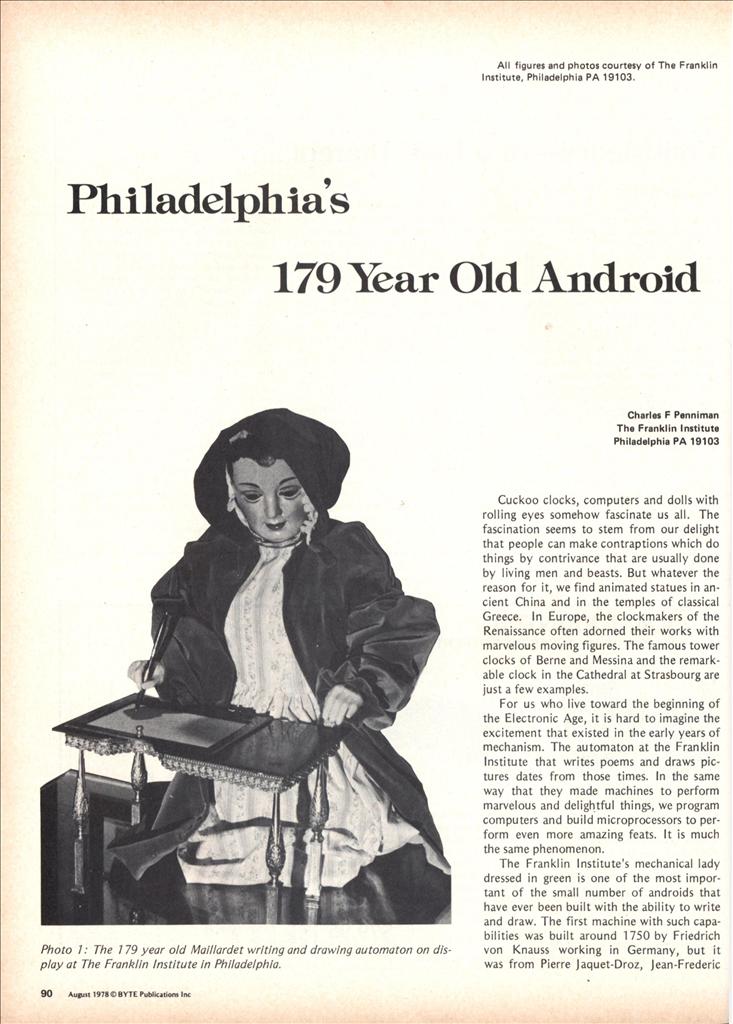 Cuckoo clocks, computers and dolls with rolling eyes somehow fascinate us all. The fascination seems to stem from our delight that people can make contraptions which do things by contrivance that are usually done by living men and beasts. But whatever the reason for it, we find animated statues in ancient China and in the temples of classical Greece. In Europe, the clockmakers of the Renaissance often adorned their works with marvelous moving figures. The famous tower clocks of Berne and Messina and the remarkable clock in the Cathedral at Strasbourg are just a few examples.

For us who live toward the beginning of the Electronic Age, it is hard to imagine the excitement that existed in the early years of mechanism. The automaton at the Franklin Institute that writes poems and draws pictures dates from those times. In the same way that they made machines to perform marvelous and delightful things, we program computers and build microprocessors to perform even more amazing feats. It is much the same phenomenon.

The Franklin Institute’s mechanical lady dressed in green is one of the most important of the small number of androids that have ever been built with the ability to write and draw. The first machine with such capabilities was built around 1750 by Friedrich von Knauss working in Germany, but it was from Pierre Jaquet-Droz, Jean-Frederic Leschot, and a succession of their collaborators that the most elegant machines came. In 1774 they produced their first writing doll in Neuchatel, Switzerland. The machine now at The Franklin Institute in Philadelphia was built about 1805 in London by Henri Maillardet, an associate of Leschot and Jaquet-Droz. His automaton is particularly distinguished by its unusually large memory and excellent movements.

The Maillardet machine weighs about 250 pounds (113.4 kg) and consists of a figure kneeling at a writing desk mounted atop an ornate stand containing the program and driving mechanism. Information for the doll’s movements is communicated up through the body of the figure by an incredibly intricate combination of levers, rods, pulleys and cams.

The heart of the writing and drawing operation is actually a mechanical “read only memory” in the form of an array of disk cams rotating on a common shaft to drive the right hand of the figure. The cams are driven by a spring motor located at one end of the base that is coordinated with a second motor located at the other end of the base. This motor is used to slide the stack of operating cams transversely on their shaft into the proper position to produce the desired readout. The information contained in the undulations of the selected set of cam surfaces is picked up by three cam followers linked to the doll’s hand to produce the required right and left, up and down, and vertical motions. There are seven programmed designs from which to choose: two poems in French, one in English, and three graceful pictures. Two designs require four sets of three cams each; the remaining designs are each on three sets of cams. This adds up to a total of 96 operating cams to govern the motions of the right hand of the figure. Additional, and far simpler, cams move the left hand, head and eyes.

The machine is marvelously complex, but perhaps the greatest marvel is that it can still function after nearly 175 years. Apparently very little wear has taken place. The details of the drawings are still remarkably sharp and the writing quite legible. The complex of linkages between the rotating cams and the motions of the hand still operate with no detectable play or slop in the bearings: a considerable achievement for engineering and technology. How this was achieved is largely a matter of conjecture today, but the automaton was built in an age in which trade secrets were kept closely within the circle of one’s apprentices and family. It would be interesting, for instance, to know exactly how the machine was programmed. One can speculate that the profiles of the cams were laid out after the doll was constructed by moving its hand over a master drawing and tracing the corresponding motions of the three cam followers on simultaneously rotating disks of brass which were then cut and filed to their proper shapes. Yet, this is only a guess. The only thing that we know for certain in this regard is that the profiling of the cams had to be done with the greatest care and precision since there is up to a tenfold magnification of any possible error due to the multiplying effect of the linkage be- tween the cam followers and the writing instrument in the doll’s hand.

Some of the elaborate and delicate mechanisms that Maillardet made were sold to the wealthy. Occasionally they were commissioned as state gifts. In fact, the only other doll with the ability to write that can be attributed directly to Henri Maillardet was made for King George III to give to the Emperor of China during a period when the English were attempting to establish favorable trade relations with that country. That machine was programmed to write, in Chinese, flattering messages to the Emperor. It made the trip to China successfully and is reported to be alive and well in a museum in Peking. However, most of the automata that were built, including the one at The Franklin Institute, went into show business and toured all over Europe. Surviving advertisements attest to their popularity. Through newspaper clippings, the progress of the Philadelphia machine can be traced from France to Russia and throughout England until 1850. It is possible, but not altogether certain, that it was purchased at about that time by the great American showman, P T Barnum, for his American Museum. By some process, now unclear, it came to be owned by a Philadelphian, John Penn Brock, whose grandchildren donated it to The Franklin Institute. Perhaps it was the fire that destroyed the museum Barnum set up in Philadelphia that damaged the machine, but it was indeed a charred mass of wreckage when it was delivered to The Franklin Institute in November of 1928. Although Maillardet had his automaton originally fitted out as a little boy in court dress, by the time it came to The Institute, the costume had been changed to that of a French soldier. At The Institute, the machine was stored in one place and then in another until a staff machinist, Charles Roberts, became interested in trying to repair it. He was tremendously proud of his success in doing so as, indeed, he should have been. New clothes were made, but this time the doll was put into a dress instead of a boy’s suit. The restoration of the original motion of dipping a pen (or perhaps it was a brush) into an inkwell turned out to be impossible. Roberts substituted a stylograph pen which has since been replaced by a totally unhistorical, but much more convenient, ballpoint pen. And, of course, it was necessary to make a number of new parts, but the only significant alterations made were to the writing instrument and to the sex of the doll.

Tradition in the Brock family had it that the automaton had been built by Maelzel, a considerable showman, the inventor of a metronome, and the builder of a number of automata. In his memoirs, P T Barnum records the purchase of several automata from him. But after being repaired, the automaton herself set things right when her memory was read out. Following the last line of her last poem, the hand continued to write in its clear but quaint style: “Ecrit par L’Automate de Maillardet,” meaning “Written by Maillardet’s Automaton.” With this clue, locked for nearly 90 years in the memory of the machine, it was possible to search out and determine its proper origin.

The one English poem that she knows how to write (see page 102) is as follows:

Unerring is my hand, tho’ small.

May I not add with truth:
I do my best to please you all;
Encourage, then, my youth.

Certainly her hand cannot be as unerring as it was in 1805. It would be interesting to have a sample of her writing from that time to make a comparison. But she still does her best to please and amaze us.”

You May Have Seen Her in Action …

In an excellent WGBH NOVA presentation on “Artificial Intelligence” aired on public television stations in March 1978, The Franklin Institute automaton by Maillardet may have been seen in action by many readers. (Also seen in action were robots NEWT and Shakey of contemporary vintage. The program also featured interviews with science fiction writer Arthur C Clarke, and a number of artificial intelligence researchers regarding the prospects for the near and far future of smart machine technology.)