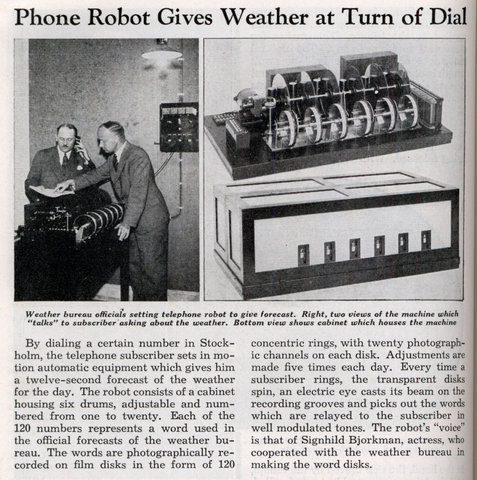 By dialing a certain number in Stockholm, the telephone subscriber sets in motion automatic equipment which gives him a twelve-second forecast of the weather for the day. The robot consists of a cabinet housing six drums, adjustable and numbered from one to twenty. Each of the 120 numbers represents a word used in the official forecasts of the weather bureau. The words are photographically recorded on film disks in the form of 120 concentric rings, with twenty photographic channels on each disk. Adjustments are made five times each day. Every time a subscriber rings, the transparent disks spin, an electric eye casts its beam on the recording grooves and picks out the words which are relayed to the subscriber in well modulated tones. The robot’s “voice” is that of Signhild Bjorkman, actress, who cooperated with the weather bureau in making the word disks.