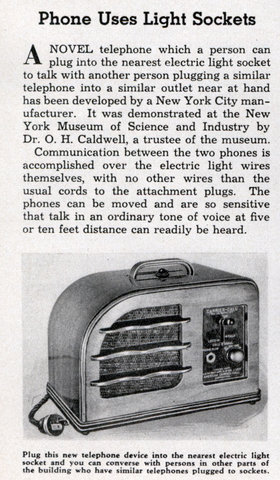 A NOVEL telephone which a person can plug into the nearest electric light socket to talk with another person plugging a similar telephone into a similar outlet near at hand has been developed by a New York City manufacturer. It was demonstrated at the New York Museum of Science and Industry by Dr. O. H. Caldwell, a trustee of the museum.

Communication between the two phones is accomplished over the electric light wires themselves, with no other wires than the usual cords to the attachment plugs. The phones can be moved and are so sensitive that talk in an ordinary tone of voice at five or ten feet distance can readily be heard.