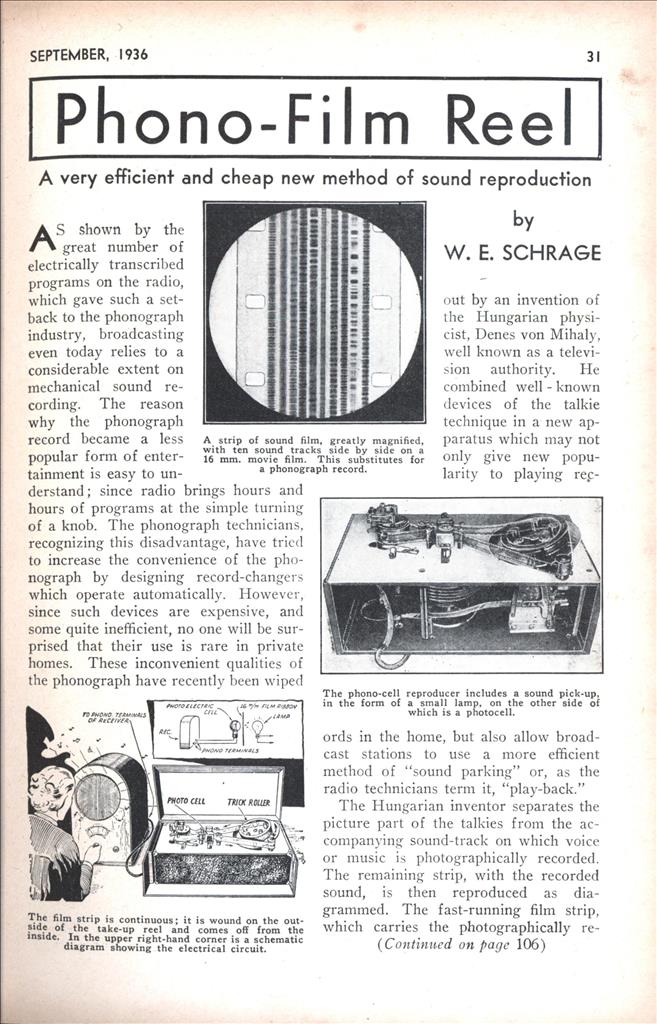 A very efficient and cheap new method of sound reproduction

AS shown by the great number of electrically transcribed programs on the radio, which gave such a setback to the phonograph industry, broadcasting even today relies to a considerable extent on mechanical sound recording. The reason why the phonograph record became a less popular form of entertainment is easy to understand; since radio brings hours and hours of programs at the simple turning of a knob. The phonograph technicians, recognizing this disadvantage, have tried to increase the convenience of the phonograph by designing record-changers which operate automatically. However, since such devices are expensive, and some quite inefficient, no one will be surprised that their use is rare in private homes. These inconvenient qualities of the phonograph have recently been wiped out by an invention of the Hungarian physicist, Denes von Mihaly, well known as a television authority. He combined well – known devices of the talkie technique in a new apparatus which may not only give new popularity to playing rep- ords in the home, but also allow broadcast stations to use a more efficient method of “sound parking” or, as the radio technicians term it, “play-back.”

The Hungarian inventor separates the picture part of the talkies from the accompanying sound-track on which voice or music is photographically recorded. The remaining strip, with the recorded sound, is then reproduced as diagrammed. The fast-running film strip, which carries the photographically re- corded sound areas ‘ is traversed by the light-beam from a small electric lamp. The beam is thus interrupted by the moving “sound areas,” and a photoelectric cell, arranged behind the film strip, converts the received light impulses, into correspondingly variable electric current impulses. These electrical impulses are magnified by an amplifier, and then transmitted to the loudspeaker.

The new system, which is very useful for “play-back” in broadcast stations, enables the reproduction of all sounds from 30 to 10,000 cycles, when the film strip moves at a speed of about 90 feet per minute. By application of a fast developing process, the sound previously recorded can be reproduced 15 to 25 minutes after the recording, without losing much of the quality. Through the use .of long enough films, complete radio programs, lasting one hour and more, may be reproduced from such a film without any interruption and without any needle scratch. This is remarkable progress, since home normal records last about three minutes; and even the new “hill and dale” station records, about 16 inches in diameter, play about 20 minutes.

This very efficient sound-recording method has now been much improved for home application. Instead of one long sound track, 10 shorter ones have been printed, as shown in the enlarged photo, upon a 16-millimeter film ribbon. By means of an interesting device, all ten sound tracks may be played, one after another, without any interruption. A film ribbon about 150 feet long, which is run at a speed of 38 feet per minute, lasts approximately 40 minutes.

The diagram shows how the new method of sound reproduction works. The 16-mm. film reel, carrying 10 different sound tracks upon its ribbon-like surface, is laid upon the large drum on the right side. From there the ribbon is fed through some small guider rolls, which are arranged in the center of the apparatus, and then proceeds to the left roller of medium size. From this the ribbon is led back to the large drum on the right side, which is furnished with five small rolls.

The film is pasted together like an endless ribbon. By a well-known mechanical trick, it is possible to unroll the outside of the reel while the inside is rolled up. The sound-pickup device, as may be seen, is installed between the small guiding rollers in the center.

The sound pickup, from each of the 10 parallel sound tracks, is effected by an automatic mechanism, which shifts the light beam to the next track when the one just played is finished.

A film reel of 150 feet length, replacing six ordinary discs, may be produced on a new cellulose material (called “Ozo-fan”) for about 50 cents. Since the royalties for the artist, etc., are not included in this quotation, the retail price of such a reel might be about $1.20. Besides the low price advantages of these new “reel records” are their very naturalistic sounding performance, and the absence of “needle scratch” even after the reel has been run off repeatedly. Since such a reel does not require much space, and is not heavy, a great number of operas and dance hits may be obtained by mail from lending libraries at low cost.

A phono reel reproducer, with three boxes, able to store six phono reels of 150 feet length, costs at present about $80 to $100. That this price may be considerably reduced by mass production is possible, since radio receivers were also very expensive during the earlier life of the industry.