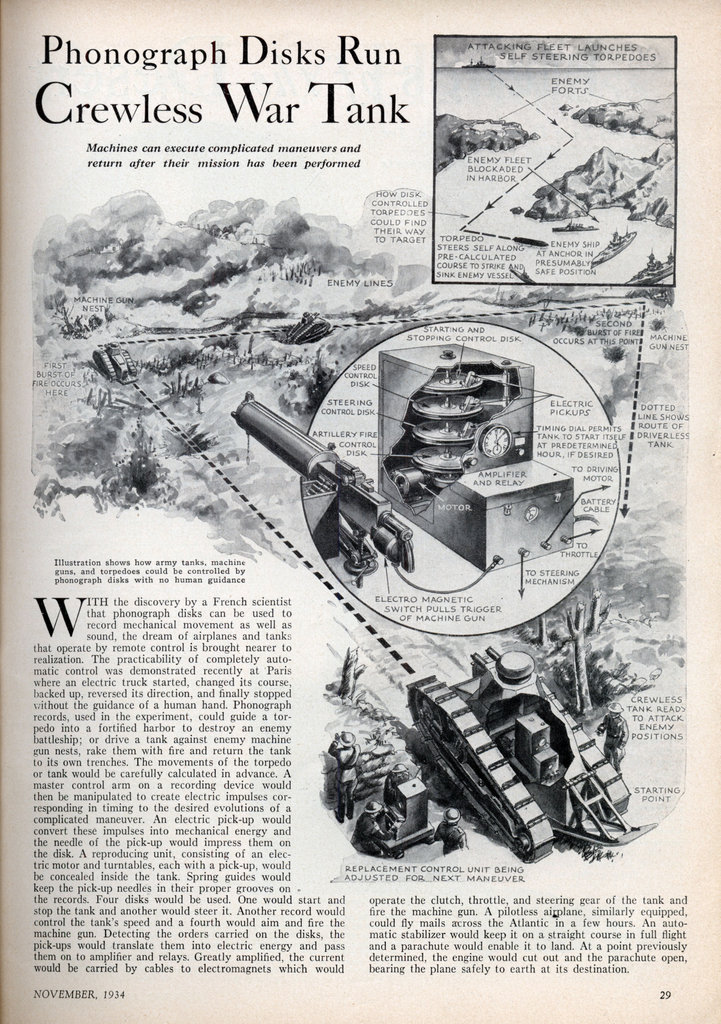 Machines can execute complicated maneuvers and return after their mission has been performed WITH the discovery by a French scientist that phonograph disks can be used to record mechanical movement as well as sound, the dream of airplanes and tanks that operate by remote control is brought nearer to realization. The practicability of completely automatic control was demonstrated recently at Paris where an electric truck started, changed its course, backed up, reversed its direction, and finally stopped without the guidance of a human hand. Phonograph records, used in the experiment, could guide a torpedo into a fortified harbor to destroy an enemy battleship; or drive a tank against enemy machine gun nests, rake them with fire and return the tank to its own trenches. The movements of the torpedo or tank would be carefully calculated in advance. A master control arm on a recording device would then be manipulated to create electric impulses corresponding in timing to the desired evolutions of a complicated maneuver. An electric pick-up would convert these impulses into mechanical energy and the needle of the pick-up would impress them on the disk. A reproducing unit, consisting of an electric motor and turntables, each with a pick-up, would be concealed inside the tank. Spring guides would keep the pick-up needles in their proper grooves on the records. Four disks would be used. One would start and stop the tank and another would steer it. Another record would control the tank’s speed and a fourth would aim and fire the machine gun. Detecting the orders carried on the disks, the pick-ups would translate them into electric energy and pass them on to amplifier and relays. Greatly amplified, the current would be carried by cables to electromagnets which would operate the clutch, throttle, and steering gear of the tank and fire the machine gun. A pilotless airplane, similarly equipped, could fly mails across the Atlantic in a few hours. An automatic stabilizer would keep it on a straight course in full flight and a parachute would enable it to land. At a point previously determined, the engine would cut out and the parachute open, bearing the plane safely to earth at its destination.