Long before the distort and spherize filters in Photoshop, photographers used the advanced tea-spoon filter. 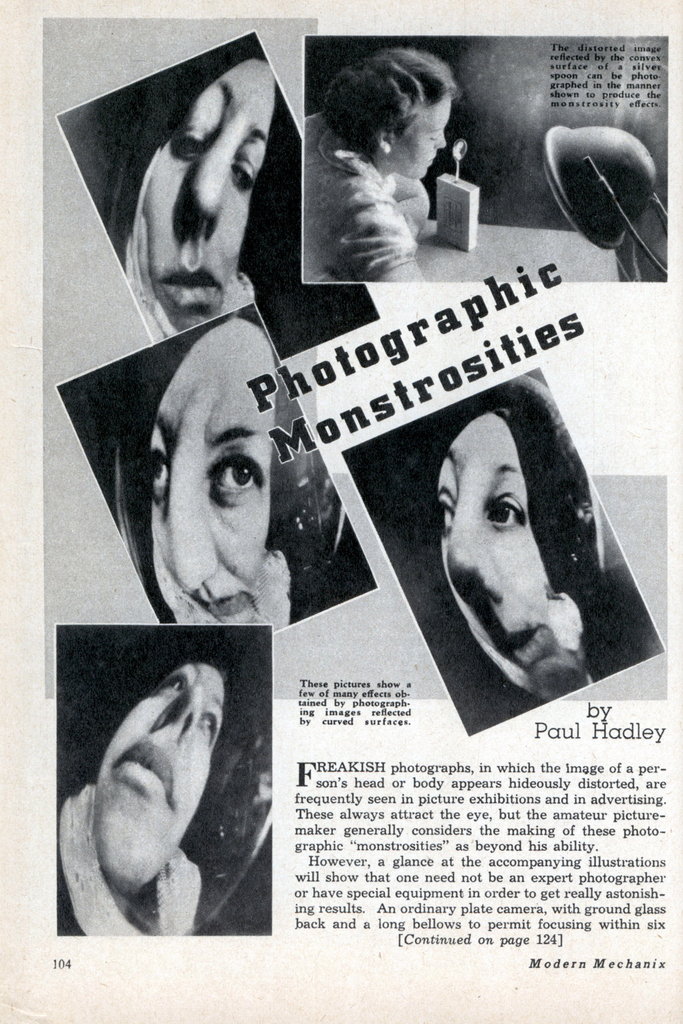 FREAKISH photographs, in which the image of a person’s head or body appears hideously distorted, are frequently seen in picture exhibitions and in advertising. These always attract the eye, but the amateur picture-maker generally considers the making of these photographic “monstrosities” as beyond his ability.

However, a glance at the accompanying illustrations will show that one need not be an expert photographer or have special equipment in order to get really astonishing results. An ordinary plate camera, with ground glass back and a long bellows to permit focusing within six or eight inches from the subject, was used in making the “monstrosities.”

Probably everyone has noticed the peculiarly distorted effects seen when looking at the reflections in the curved, polished surface of an automobile headlight, lamp reflector or similar object. What can be seen can be photographed, so by setting up a camera so as to bring it within close focus of one of these surfaces, surprising pictures will result.

In making the photos shown in this article, the photographer used the rounded bowl surface of a brightly polished silver spoon. The spoon, as can be seen in the explanatory photo, was held steadily in place on the table by forcing the handle into a slot cut in a small cardboard box.

The camera was arranged so that this reflection could be photographed without the subject being included in the picture. This required the camera being placed close to the spoon so that the distorted reflection covered nearly all of the ground glass focusing screen. While artificial lighting was used to obtain the brilliant effects shown, natural daylight, from a window, can be used with equal results. To improve results, a black background should be placed behind the subject to ward off extraneous light.

After taking the pictures, best effects will be obtained by enlarging the images so that the edges of the spoon are excluded from the prints. This will give them a puzzling effect, making it difficult for anyone to guess how they were made.

Other curved surfaces can be used to produce photo “monstrosities.” The outside of highly polished auto headlights and the mirrored balls such as used for lawn decorations both yield unusual effects. In all cases, the subject must be very close to the reflecting surface for greatest distortion and the camera placed so as to eliminate the image of the subject itself.