Photographing Stars with a Rocket (Nov, 1929)

No, this article is not about a particularly ambitious band of paparazzi. 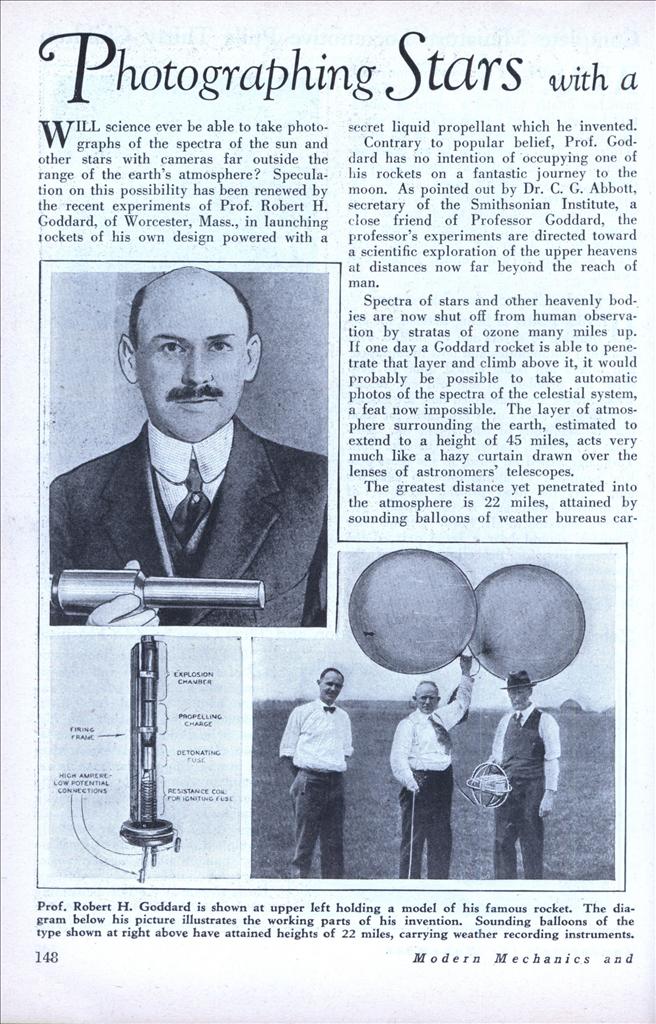 Photographing Stars with a Rocket

WILL science ever be able to take photographs of the spectra of the sun and other stars with cameras far outside the range of the earth’s atmosphere? Speculation on this possibility has been renewed by the recent experiments of Prof. Robert H. Goddard, of Worcester, Mass., in launching rockets of his own design powered with a secret liquid propellant which he invented.

Contrary to popular belief, Prof. Goddard has no intention of occupying one of his rockets on a fantastic journey to the moon. As pointed out by Dr. C. G. Abbott, secretary of the Smithsonian Institute, a close friend of Professor Goddard, the professor’s experiments are directed toward a scientific exploration of the upper heavens at distances now far beyond the reach of man.

Spectra of stars and other heavenly bodies are now shut off from human observation by stratas of ozone many miles up. If one day a Goddard rocket is able to penetrate that layer and climb above it, it would probably be possible to take automatic photos of the spectra of the celestial system, a feat now impossible. The layer of atmosphere surrounding the earth, estimated to extend to a height of 45 miles, acts very much like a hazy curtain drawn over the lenses of astronomers’ telescopes.

The greatest distance yet penetrated into the atmosphere is 22 miles, attained by sounding balloons of weather bureaus carrying instruments to study the upper air. Strict secrecy surrounds the distances penetrated by Prof. Goddard’s rockets. His latest experiments caused a sensation around Worcester, where a group of villagers in the neighborhood of Goddard’s experiment station observed what appeared to be a flaming meteor which hurtled through space at breath-taking gait, lighting up the landscape and finally bursting with a thunderous roar.

To propel a rocket to great heights, Prof. Goddard now realizes that a fuel with high energy content, such as hydrogen mixed in careful combination with oxygen, is what is required. For several years he experimented with smokeless powder.