This article is interesting for a number of reasons. One of the most interesting is that M.L Humasen was a high-school dropout who got a job as a janitor at Mt. Wilson Observatory where the was later made a member of the astronomical staff . He went on to take many of the observation that Edwin Hubble used to formulate Hubble’s Law. It’s odd that in the interview Humasen says he doesn’t believe the universe is “blowing up” which is precisely what Hubble’s Law says, though a bit less dramatically.

I’m a little confused about calling the object a star. N.G.C 4800 is actually a galaxy. Hubble was the one who proved, in the early 1920’s that these distant objects were outside the Milky Way and were in fact galaxies. Since they also refer to it as a nebula (which was sort of a catch-all term for blurry stellar objects at the time) I’m going to guess that it was just the reporter who decided it was a star.

I don’t know enough about solar spectra to be sure, but it seems like you wouldn’t be able to make a direct comparison of the spectra from a whole galaxy to that of one star. Incidentally N.G.C 4800 is actually 97.14 million light years away not the 50 million the article states. 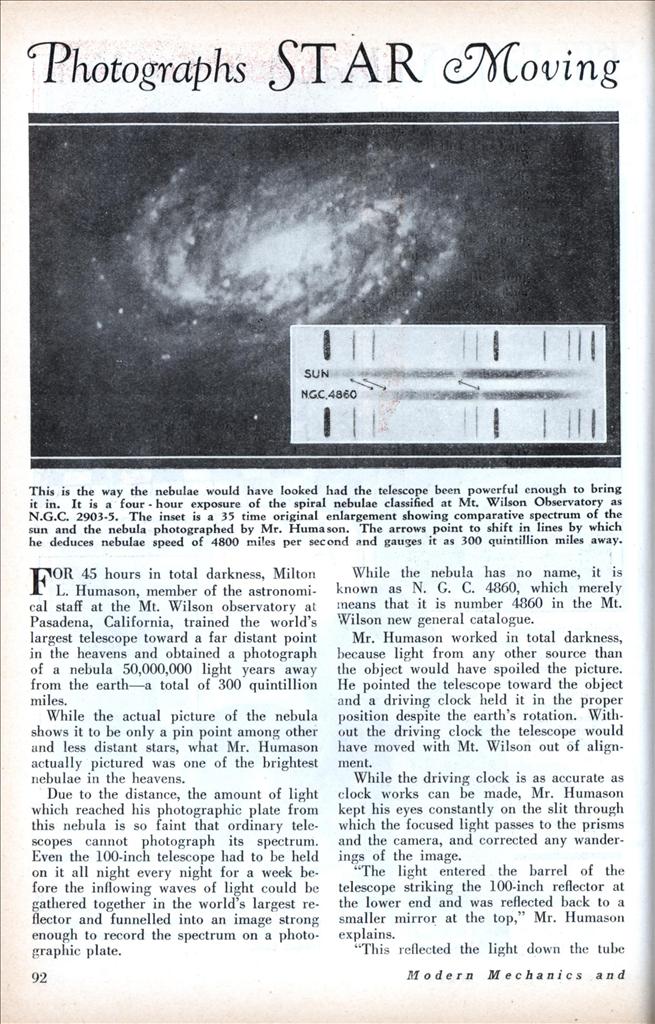 Sitting with his eye glued to a telescopic camera for 45 hours, M. L. Humason, Mt. Wilson astronomer, has succeeded in setting a record for long distance photographs. The nebula on which he trained his camera is 50,000,000 light years away from the earth.

FOR 45 hours in total darkness, Milton L. Humason, member of the astronomical staff at the Mt. Wilson observatory at Pasadena, California, trained the world’s largest telescope toward a far distant point in the heavens and obtained a photograph of a nebula 50,000,000 light years away from the earth—a total of 300 quintillion miles.

While the actual picture of the nebula shows it to be only a pin point among other and less distant stars, what Mr. Humason actually pictured was one of the brightest nebulae in the heavens.

Due to the distance, the amount of light which reached his photographic plate from this nebula is so faint that ordinary telescopes cannot photograph its spectrum. Even the 100-inch telescope had to be held on it all night every night for a week before the inflowing waves of light could be gathered together in the world’s largest reflector and funnelled into an image strong enough to record the spectrum on a photographic plate.

While the driving clock is as accurate as clock works can be made, Mr. Humason kept his eyes constantly on the slit through which the focused light passes to the prisms and the camera, and corrected any wanderings of the image.

“The light entered the barrel of the telescope striking the 100-inch reflector at the lower end and was reflected back to a smaller mirror at the top,” Mr. Humason explains.

“This reflected the light down the tube again, bringing it to a focus at a slit under the eyes of the observer. Passing through the slit the focused light would strike a series of prisms which broke it into colors, and that is the spectrum I photographed. Falling for a long time on a sensitive photographic plate, even this very faint light finally made an impression.”

“Interpreting this in the established way,” says Mr. Humason, “it would look as if the whole universe were exploding, scattering into space, entire nebulae flying away faster than shells from a cannon, but I don’t believe the universe is blowing up.”

While photographing this rapidly receding nebulae, Mr. Humason had to control the focus and the comparison spectrum, keep the temperature of the spectrograph exactly right throughout the night. Sitting in total darkness with his eyes on a slit of dim light little larger than a pin head, he worked levers and pushed buttons for seven nights without moving the photographic plate or losing sight of the faintly luminous spot in the sky. Here Mr. Humason brought romance of the heavens down to earth.

Mr. Humason and his fellow astronomers have been unable to determine whether the huge velocity—4800 miles a second —is real, or whether the indication comes from a slowing down of the light waves due to distortion in space, or to forces acting on the waves during their long journey to earth.

Mr. Humason’s long distance photograph goes to the very heart of the problem. The light by which the photograph was taken comes from the remotest region of the universe. It is not local light, not light radiated from within our own galaxy. It originates far outside.