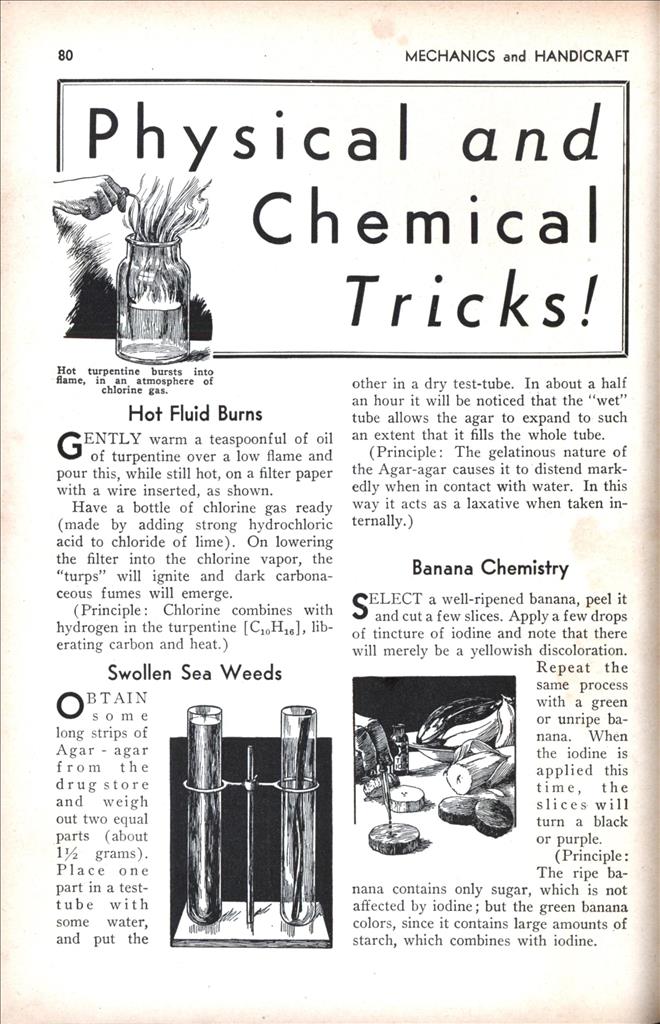 GENTLY warm a teaspoonful of oil of turpentine over a low flame and pour this, while still hot, on a filter paper with a wire inserted, as shown.

Have a bottle of chlorine gas ready (made by adding strong hydrochloric acid to chloride of lime). On lowering the filter into the chlorine vapor, the “turps” will ignite and dark carbonaceous fumes will emerge.

OBTAIN some long strips of Agar – agar from the drug store and weigh out two equal parts (about 1-1/2 grams). Place one part in a test-tube with some water, and put the other in a dry test-tube. In about a half an hour it will be noticed that the “wet” tube allows the agar to expand to such an extent that it fills the whole tube.

(Principle: The gelatinous nature of the Agar-agar causes it to distend markedly when in contact with water. In this way it acts as a laxative when taken internally.) Banana Chemistry.

SELECT a well-ripened banana, peel it and cut a few slices. Apply a few drops of tincture of iodine and note that there will merely be a yellowish discoloration.

Repeat the same process with a green or unripe banana. When the iodine is applied this time, the slices will turn a black or purple.

(Principle: The ripe banana contains only sugar, which is not affected by iodine; but the green banana colors, since it contains large amounts of starch, which combines with iodine.

OBTAIN some No. 1 or No. 0 gelatin capsules from the drug store. Into each place one buckshot, or a small ball-bearing. Allow them to start down an inclined plane and they will tumble down clumsily at different rates. If various sizes of capsules are used (such as Nos. 3, 2, 1, 0, 00), the effect will appear even more striking.

(Principle: The tumbling is due to the bearings, which, as they roll down the plane, carry with them the light gelatin capsules, which are turned over end-for-end by the impetus.) Floating Colors.

FILL a wide bowl with cold water and allow it to become motionless. Now float one drop each of three differently colored lacquers on the surface; these will blend or mix spontaneously. Place the fingers inside a glass bottle, tumbler, cup, or even a paper cup (without any paraffin on its surface) and immerse it in the water slowly; at the same time, give the object a half turn first in one and then in the opposite direction. It will be observed that a most beau- tiful show of colors, like variegated marble, will coat the surface of the object, making a useful ornament.

(Principle: Lacquer is insoluble in water and, if an object is dipped in this floating film, its surface will be coated.) Experiment in Osmosis.

MAKE a collodion sack by pouring collodion into an Erlenmeyer flask, rotating it evenly and pouring the excess into the stock bottle. After the sack is fully formed and dry, carefully remove it by pulling gently and gradually exerting more force. After it is removed, place in a large glass vessel containing cold water and fill the sack with Karo syrup dissolved in water (cane sugar will do).

After allowing this to stand for several hours, taste it and you will ob serve that the sugar has gone through the sack. Repeat the same experiment, substituting starch for the syrup or sugar. This time, you will observe, the starch remains in the sack.

(Principle: Sugar is a crystalloid and gets through a membrane, while starch is a colloid and does not dialyze.)