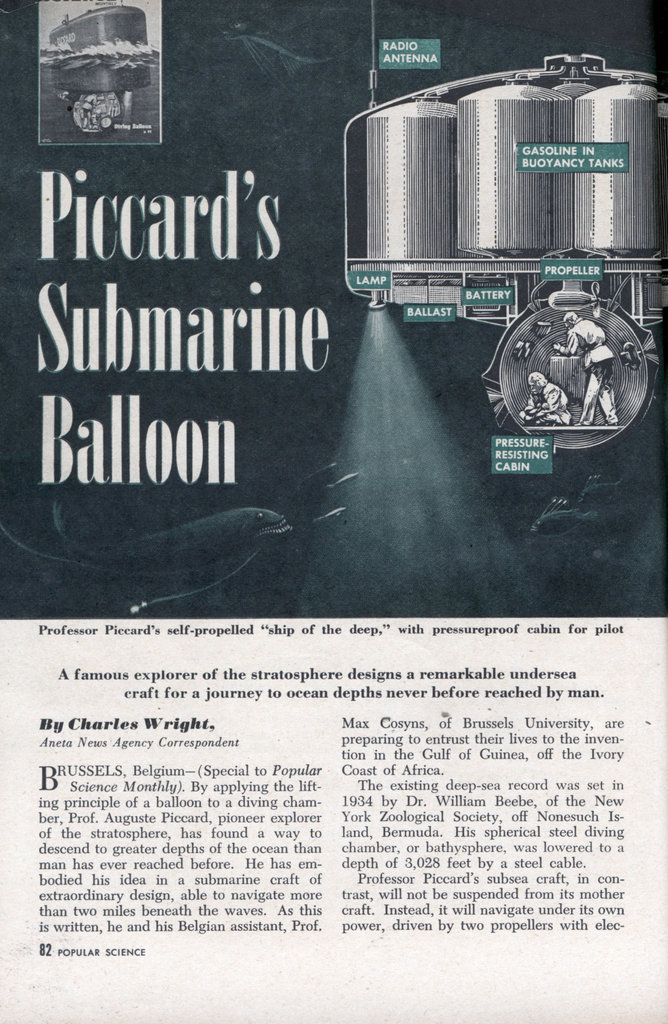 A famous explorer of the stratosphere designs a remarkable undersea craft for a journey to ocean depths never before reached by man.

BRUSSELS, Belgium-(Special to Popular Science Monthly). By applying the lifting principle of a balloon to a diving chamber, Prof. Auguste Piccard, pioneer explorer of the stratosphere, has found a way to descend to greater depths of the ocean than man has ever reached before. He has embodied his idea in a submarine craft of extraordinary design, able to navigate more than two miles beneath the waves. As this is written, he and his Belgian assistant, Prof. Max Cosyns, of Brussels University, are preparing to entrust their lives to the invention in the Gulf of Guinea, off the Ivory Coast of Africa.

The existing deep-sea record was set in 1934 by Dr. William Beebe, of the New York Zoological Society, off Nonesuch Island, Bermuda. His spherical steel diving chamber, or bathysphere, was lowered to a depth of 3,028 feet by a steel cable.

Professor Piccard’s subsea craft, in contrast, will not be suspended from its mother craft. Instead, it will navigate under its own power, driven by two propellers with electric motors. The bushy-haired, 63-year-old, Swiss-born professor intends to take it down to a depth of two and a half miles, which is more than four times as far as Dr. Beebe went, to make scientific observations in an unexplored region of eternal night.

Combining the Greek words for depth and ship, Professor Piccard calls his craft a “bathyscaphe,” or ship of the deep. Pilot and. observer will ride in a hermetically sealed, alloy-steel sphere 6-1/2 feet in outside diameter. Its massive walls, 3-1/2 inches thick, will safely withstand the tremendous pressure of more than 5,700 pounds to the square inchâ€”about a ton for every mile of descentâ€”resulting from the crushing weight of water overhead. Two windows of trans-parent plastic, measuring 16 inches in outside diameter, four inches in inside diameter, and six inches thick, give the crew a view into the lower depths. At the points where these ports are inserted, the walls of the sphere itself are correspondingly thickened for strength. The greater the water pressure upon the windows, the more tightly they are forced against their conical seats, preventing any leak. Electrical cables enter through smaller cones of plastic, similarly providing a watertight seal.

So that the men inside the globe can control its ascent and descent at will, Professor Piccard suspends it from a “balloon”â€” a buoyancy float consisting of seven aluminum cylinders within an encircling shell of thin metal. Just as the gas bag of a balloon contains a gas lighter than air, so these aluminum cylinders will hold a fluid lighter than water. For this purpose Professor Piccard has chosen aviation gasoline, which weighs 43-3/4 pounds to the cubic footâ€”just 20 pounds less than a cubic foot of sea water. Thus the total capacity of the cylinders, 1,000 cubic feet of gasoline, gives a lifting force of 20,000 pounds, or 10 tons. This will be considerably more than sufficient to counterbalance the weight of the steel sphere-its 10-ton weight out of water becomes 5-1/2 tons when submergedâ€”and its equipment.

The buoyancy tanks are filled with gasoline in preference to air because the extreme pressure to be encountered would compress air beyond all usefulness for displacing water. Even the gasoline, relatively incompressible, will be squeezed to a slightly smaller volume. Hence, openings at the bottoms of the cylinders will admit sea water freely, equalizing pressure inside and out and obviating any need for heavy armored walls such as the cabin requires.

In order to descend, the undersea explorers will “valve off” gasoline, exactly as balloonists descend by valving off gas. To complete its parallel to a balloon in principle, the bathyscaphe will drop ballast in order to rise again. This ballast consists of heavy concrete blocks fitted with iron faces, so that they may be suspended from the float by electromagnets. As long as current flows through these magnets from a 2,600-pound storage battery built into the float, the blocks remain in place. By pressing buttons within the spherical cabin, the occupants may drop any or all of the blocks. For more delicate adjustments of buoyancy, iron shot may be dropped by other electromagnets. A total of 2-1/2 tons of ballast may be released and, in an emergency, the storage battery itself may be jettisoned.

Equipment of the submarine gondola will provide every scientific facility for the adventurers’ purpose of observing marine life at extreme ocean depths and exploring the bed of the sea. Trained through a window, a motion-picture camera will photograph strange denizens of the deep illuminated by 3,000-candlepower undersea lamps. The films are expected to record a myriad of fish and other creatures new to science, which have eluded nets lowered from the surface in earlier attempts to bring them up for study. Because the explorers will be far too busy to jot down notes on their scientific observations, their rapid-fire comments on what they see will be picked up by the microphone of an automatic voice recorder,

to be played back and transcribed after they return to the surface. By remote control, they will operate equipment on the outside of the bathyscaphe that will trap specimens of deep-sea life, bring up bottlefuls of water, and collect samples of the ocean bed.

A 4,000-ton ocean-going tug, the Scaldis, has been fitted out to serve as their floating base of operations. While the bathyscaphe rests on the deck, the two men will squeeze into the cabin through a circular entrance port, containing one of the windows, which will then be sealed into place. A crane will lower the apparatus into the water, the gasoline will be pumped into the buoyancy tanks, and the bathyscaphe will start its plunge.

Through the observers’ portholes, as they descend, the color of the sea will change from bright green to blue-green, darker blue, and then to deepening gray as daylight fades out. As they approach the 2,000-foot level they will enter a wonderland that only the occupants of Beebe’s bathysphere have penetrated beforeâ€”a realm of absolute blackness such as surface dwellers can scarcely imagine, darker than the darkest night and punctuated only by the flashing blue and yellow lights of the weird, luminous creatures that inhabit this nether world. The walls of their steel sphere will become icy cold to their touch. At the depth they will reach, the sea’s temperature hovers only a few degrees above the freezing point, summer and winter alike. As pressure gauges show the craft is approaching the sea bed, its distance above bottom will be.

gauged by lowering a weighted cable from . a motor-driven drum. By careful control of ballast and buoyancy, Professor Piccard expects to be able to keep the bathyscaphe within a few feet of the ocean floor as it drifts along, or turns on its battery-powered propellers for faster progress. For a better look at objects of interest illuminated by the powerful lamps, varying the relative speed of the propellers will rotate the cabin to face in any direction. Underwater navigation will be aided by a compass mounted on the outside of the cabin, with a connection to an indicator on the inside that will duplicate its reading.

Plans call for an undersea journey lasting from eight to 10 hours, for which oxygen tanks in the cabin provide an ample supply, and an adequate reserve for good measure. Air-conditioning apparatus will keep the air in the sealed cabin purified by means of chemicals, removing exhaled carbon dioxide with soda lime and absorbing excess humidity with silica gel.

Just as a barograph serves to confirm an airplane or balloon altitude record, so a recording water-pressure gauge, whose pen similarly traces a record upon a revolving drum bearing a paper chart, will testify to the greatest depth reached by the bathyscaphe.

As the subsea craft ascends once more and approaches the surface, possibly several miles from its starting point, it will reveal its whereabouts to the surface ship by means of an undersea signaling transmitter loaned for the purpose by the British Admiralty, a device of a type used during the last war for signaling between submarines with sound waves. Thus the Scaldis will be able to reach the bathyscaphe promptly after it surfaces, haul it aboard, and release the men sealed within it. In case of any slip-up, the bathyscaphe is also equipped to signal its surface location by radio and by flares and rockets, and is brightly painted so that, if necessary, search planes should find it easily.

So far as human foresight can provide, every imaginable contingency has been anticipated. Models of the cabin, built to one-tenth scale and tested to destruction in a high-pressure hydraulic chamber, indicate the gondola will withstand two to three times the pressure it will encounterâ€”a generous margin of safety. To insure against defects in its steel shell, a capsule of radium was placed within the ball and its entire exterior was covered with envelopes containing sheets of photographic film. The resulting radiographs revealed the metal to be flawless, save for one inconsequential “bubble” that was drilled out and filled with solid metal, just to be on the safe side. As a final precaution, the first descent with men aboard will be preceded by a full-dress test dive with the craft empty. Sent down to a depth of 3-3/4 miles, half again as deep as, it is intended to carry passengers, it will be preset to release ballast automatically at this level and bob up again. If it survives the titanic crushing force at this depth, a total of more than 72,000 tons upon its spherical shell, it should serve its purpose successfully. Despite every possible precaution, however, the adventurers are well aware that their first descent will be a gamble with death. They are prepared to accept all of the hazards.