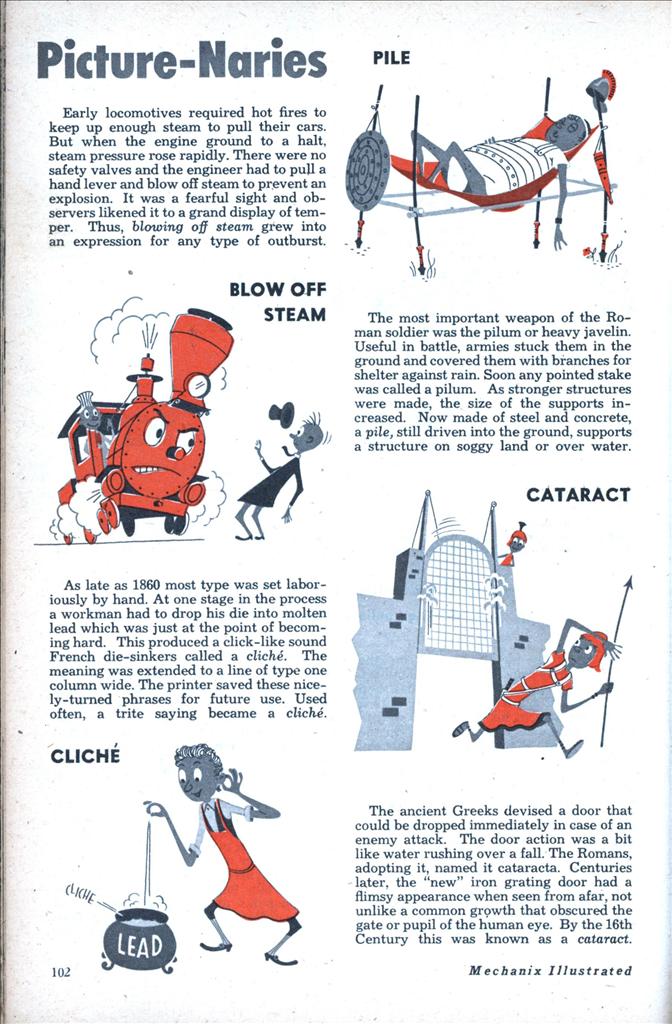 Early locomotives required hot fires to keep up enough steam to pull their cars. But when the engine ground to a halt, steam pressure rose rapidly. There were no safety valves and the engineer had to pull a hand lever and blow off steam to prevent an explosion. It was a fearful sight and observers likened it to a grand display of temper. Thus, blowing off steam grew into an expression for any type of outburst.

As late as 1860 most type was set laboriously by hand. At one stage in the process a workman had to drop his die into molten lead which was just at the point of becoming hard. This produced a click-like sound French die-sinkers called a cliche. The meaning was extended to a line of type one column wide. The printer saved these nicely-turned phrases for future use. Used often, a trite saying became a cliche.

The most important weapon of the Roman soldier was the pilum or heavy javelin. Useful in battle, armies stuck them in the ground and covered them with branches for shelter against rain. Soon any pointed stake was called a pilum. As stronger structures were made, the size of the supports increased. Now made of steel and concrete, a pile, still driven into the ground, supports a structure on soggy land or over water.

The ancient Greeks devised a door that could be dropped immediately in case of an enemy attack. The door action was a bit like water rushing over a fall. The Romans, adopting it, named it cataracta. Centuries later, the “new” iron grating door had a flimsy appearance when seen from afar, not unlike a common growth that obscured the gate or pupil of the human eye. By the 16th Century this was known as a cataract.