The printout actually looks really good, though at 3 feet per hour it isn’t the most useful thing in the world. 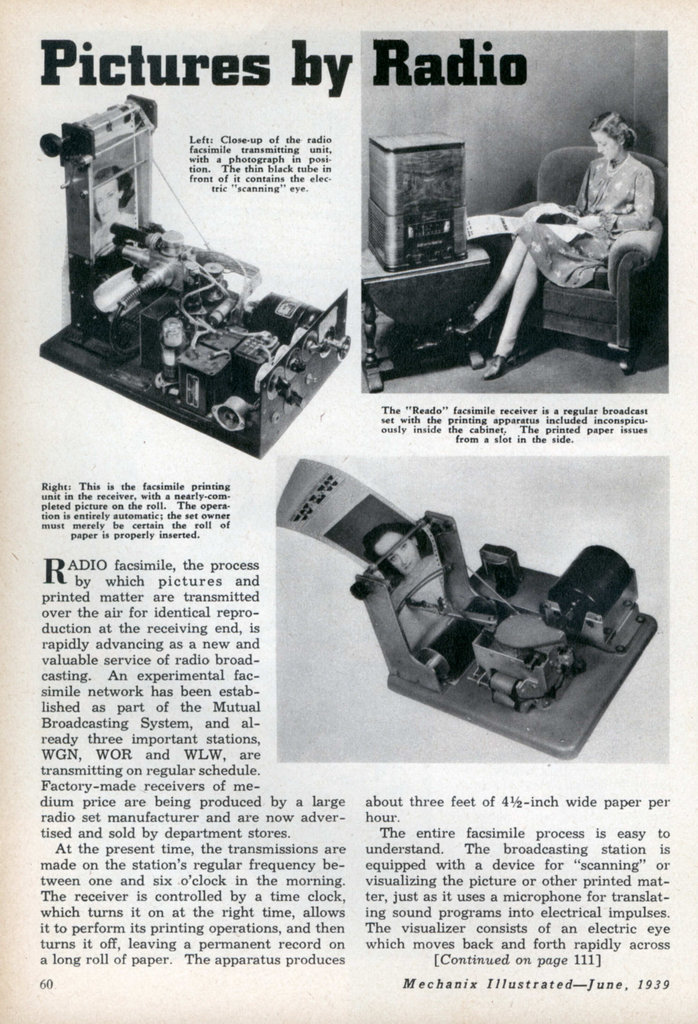 RADIO facsimile, the process by which pictures and printed matter are transmitted over the air for identical reproduction at the receiving end, is rapidly advancing as a new and valuable service of radio broadcasting. An experimental facsimile network has been established as part of the Mutual Broadcasting System, and already three important stations, WGN, WOR and WLW, are transmitting on regular schedule. Factory-made receivers of medium price are being produced by a large radio set manufacturer and are now advertised and sold by department stores.

At the present time, the transmissions are made on the station’s regular frequency between one and six o’clock in the morning. The receiver is controlled by a time clock, which turns it on at the right time, allows it to perform its printing operations, and then turns it off, leaving a permanent record on a long roll of paper. The apparatus produces about three feet of 4-1/2 inch wide paper per hour.

The entire facsimile process is easy to understand. The broadcasting station is equipped with a device for “scanning” or visualizing the picture or other printed matter, just as it uses a microphone for translating sound programs into electrical impulses. The visualizer consists of an electric eye which moves back and forth rapidly across the paper, scanning a line at a time and transmitting the contrasting tones of the image as a continuous series of electric waves of varying intensity. Any black and white matter, such as photographs, drawings, written, typed or printed words, diagrams, etc., can be fed into the machine in the form of a continuous roll.

At the receiving end, the process is reversed. A sensitive stylus at the end of a swinging arm sweeps across a specially prepared white paper, in exact step with the moving electric eye at the broadcasting station. The electrical impulses, passing from the stylus through the paper, oxidize the surface of the latter, and cause it to turn black wherever the image was black on the picture being transmitted. The paper advances upward out of the machine automatically, moving up a notch each time the stylus completes a line. In the morning the owner of the set simply tears off the printed part of the roll and reads it at his leisure.

Facsimile is widely confused with television, although the two processes bear no relation to each other. Facsimile is primarily an electrical recording system, in which time is relatively unimportant. Television is popularly defined as instantaneous sight at a distance by electrical means; the looker-in at the receiving end sees fleeting images of an event while it is happening.