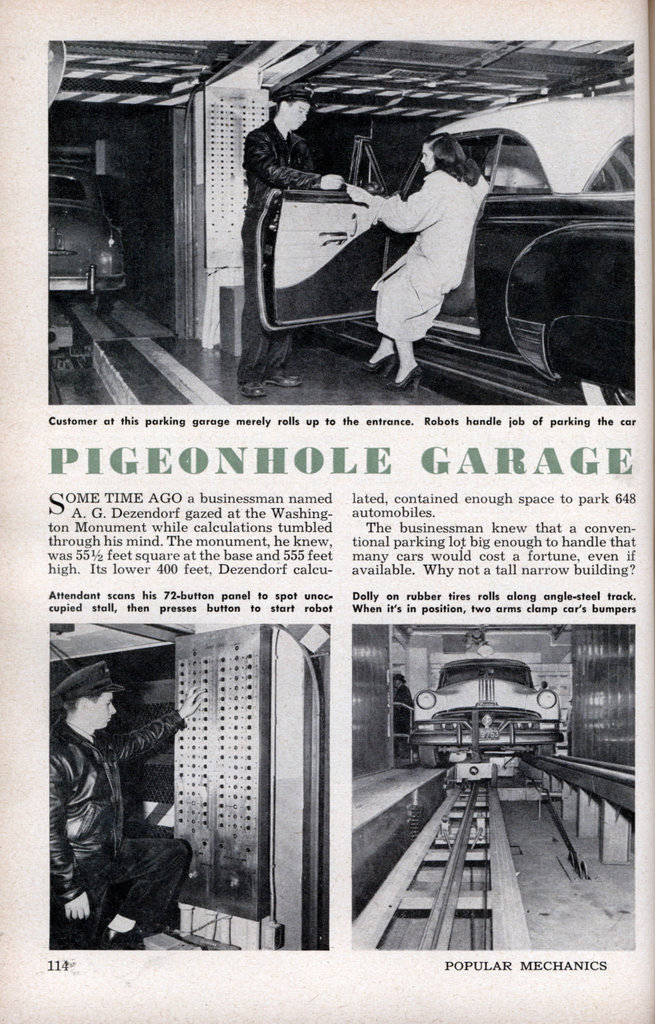 COME TIME AGO a businessman named A. G. Dezendorf gazed at the Washington Monument while calculations tumbled through his mind. The monument, he knew, was 55-1/2 feet square at the base and 555 feet high. Its lower 400 feet. Dezendorf calculated, contained enough space to park 648 automobiles.

The businessman knew that a conventional parking lot big enough to handle that many cars would cost a fortune, even if available. Why not a tall narrow building?

Today, on an area measuring only 25 by 72 feet, Dezendorf operates a fully automatic parking garage. In it, robots do all the workâ€” not a hand touches the car as it travels to or from a stall on any of the 18 floors in the building.

The project requires but one attendant. Here’s how it works: The customer leaves his car in an entrance lane. He may lock it if he wishes, as long as he doesn’t set the hand brake. The attendant then presses a button which sends a 22-foot steel dolly on rubber tires under the automobile. The dolly moves along an angle-steel guide, propelled by a three-horsepower electric motor.

When the dolly is directly under the car, another motor swings two metal arms from a horizontal to a vertical position. From either end of the car these arms move toward each other until they press the car’s bumpers.

Pressure against the bumpers starts the motor again, and the dolly rolls the car along the track and onto an elevator. The attendant, noting from green lights on a 72-button control board which stalls are unoccupied, presses a button to instruct the mechanism as to where the car is to be parked. The elevator moves up to the proper floor and the dolly rolls the car into the designated stall. The two clamping arms then drop to a horizontal position and the dolly moves off for its next load. The car remains in the stall because the floor slopes gradually away from the elevator.

The front wheels rest against a concrete barrier.

When the owner calls for his car, the attendant presses the proper button and the dolly rushes off to the desired car, whisks it down on the elevator and delivers it to the owner. The attendant can deliver any car in the building within one minute.

Should the attendant, at any time, push the button controlling an occupied stall, the mechanism cancels his instructions.

One side of each parking stall contains a trough-shaped runway for the car wheels, while the other is a broad slab of concrete. This allows for variations in widths of cars, thus permitting the garage to accommodate any size car from an Austin to a Cadillac.