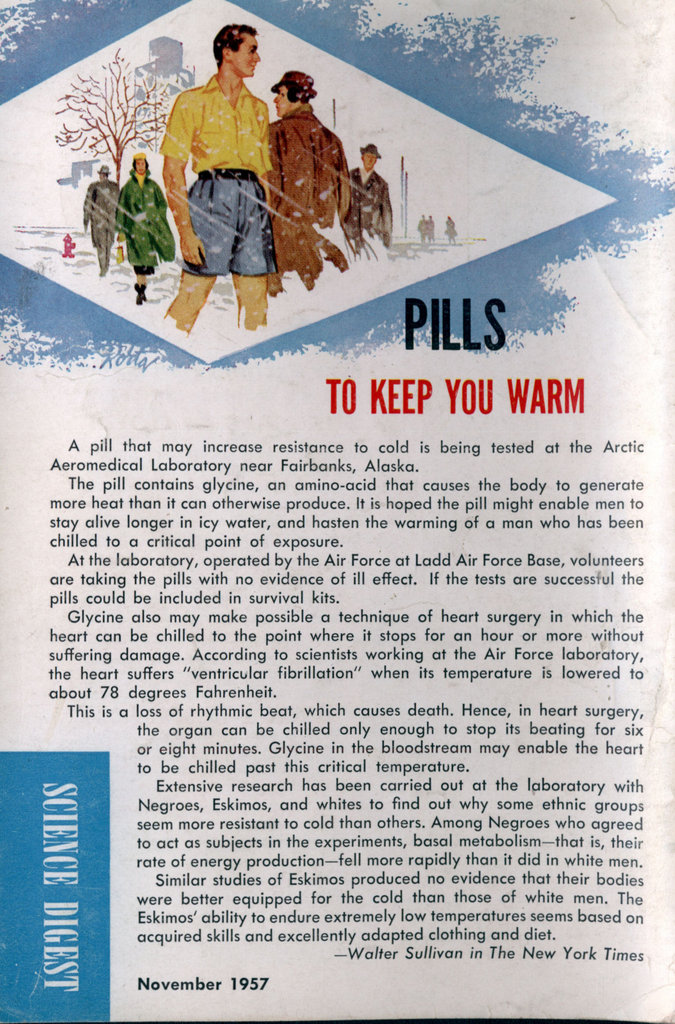 PILLS TO KEEP YOU WARM

A pill that may increase resistance to cold is being tested at the Arctic Aeromedical Laboratory near Fairbanks, Alaska.

The pill contains glycine, an amino-acid that causes the body to generate more heat than it can otherwise produce. It is hoped the pill might enable men to stay alive longer in icy water, and hasten the warming of a man who has been chilled to a critical point of exposure.

At the laboratory, operated by the Air Force at Ladd Air Force Base, volunteers are taking the pills with no evidence of ill effect. If the tests are successful the pills could be included in survival kits.

Glycine also may make possible a technique of heart surgery in which the heart can be chilled to the point where it stops for an hour or more without suffering damage. According to scientists working at the Air Force laboratory, the heart suffers “ventricular fibrillation” when its temperature is lowered to about 78 degrees Fahrenheit.

This is a loss of rhythmic beat, which causes death. Hence, in heart surgery, the organ can be chilled only enough to stop its beating for six or eight minutes. Glycine in the bloodstream may enable the heart to be chilled past this critical temperature.

Extensive research has been carried out at the laboratory with Negroes, Eskimos, and whites to find out why some ethnic groups seem more resistant to cold than others. Among Negroes who agreed to act as subjects in the experiments, basal metabolism—that is, their rate of energy production—fell more rapidly than it did in white men. Similar studies of Eskimos produced no evidence that their bodies were better equipped for the cold than those of white men. The Eskimos’ ability to endure extremely low temperatures seems based on acquired skills and excellently adapted clothing and diet.