Modern Mechanix
Issue: Dec, 1933
Posted in: General
No Comments on Pilot Your Own Plane and Never Crash! (Dec, 1933) 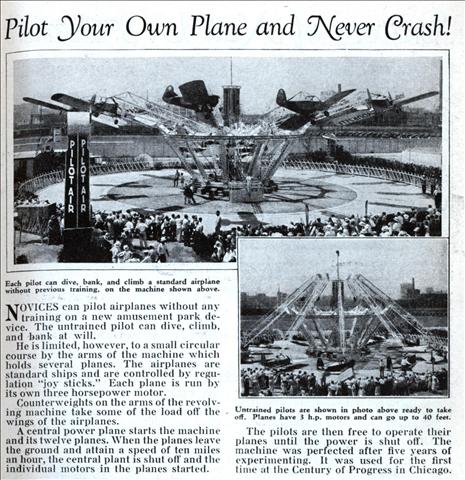 Pilot Your Own Plane and Never Crash!

NOVICES can pilot airplanes without any training on a new amusement park device. The untrained pilot can dive, climb, and hank at will.

He is limited, however, to a small circular course by the arms of the machine which holds several planes. The airplanes are standard ships and are controlled by regulation “joy sticks.” Each plane is run by its own three horsepower motor.

Counterweights on the arms of the revolving machine take some of the load off the wings of the airplanes.

A central power plane starts the machine and its twelve planes. When the planes leave the ground and attain a speed of ten miles an hour, the central plant is shut off and the individual motors in the planes started.

The pilots are then free to operate their planes until the power is shut off. The machine was perfected after five years of experimenting. It was used for the first time at the Century of Progress in Chicago.