PILOTS FACE EACH OTHER IN STRATOSPHERE PLANE (Dec, 1932) 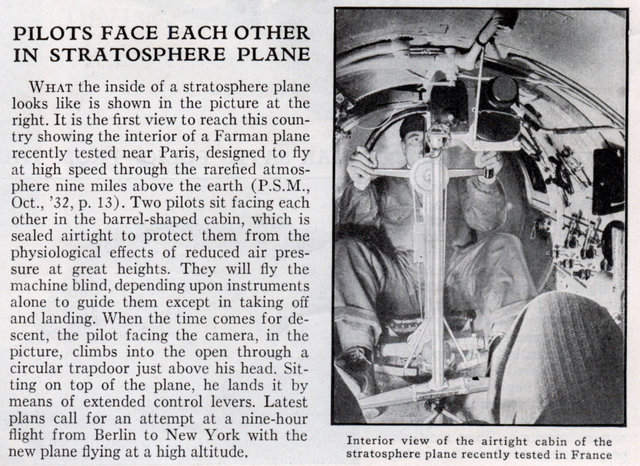 PILOTS FACE EACH OTHER IN STRATOSPHERE PLANE
What the inside of a stratosphere plane looks like is shown in the picture at the right. It is the first view to reach this country showing the interior of a Farman plane recently tested near Paris, designed to fly at high speed through the rarefied atmosphere nine miles above the earth (P.S.M., Oct., ’32, p. 13). Two pilots sit facing each other in the barrel-shaped cabin, which is sealed airtight to protect them from the physiological effects of reduced air pressure at great heights. They will fly the machine blind, depending upon instruments alone to guide them except in taking off and landing. When the time comes for descent, the pilot facing the camera, in the picture, climbs into the open through a circular trapdoor just above his head. Sitting on top of the plane, he lands it by means of extended control levers. Latest plans call for an attempt at a nine-hour flight from Berlin to New York with the new plane flying at a high altitude.