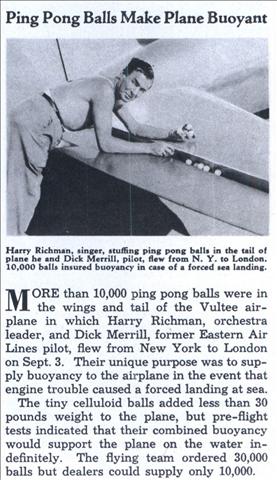 MORE than 10,000 ping pong balls were in the wings and tail of the Vultee airplane in which Harry Richman, orchestra leader, and Dick Merrill, former Eastern Air Lines pilot, flew from New York to London on Sept. 3. Their unique purpose was to supply buoyancy to the airplane in the event that engine trouble caused a forced landing at sea.

The tiny celluloid balls added less than 30 pounds weight to the plane, but pre-flight tests indicated that their combined buoyancy would support the plane on the water indefinitely. The flying team ordered 30,000 balls but dealers could supply only 10,000.