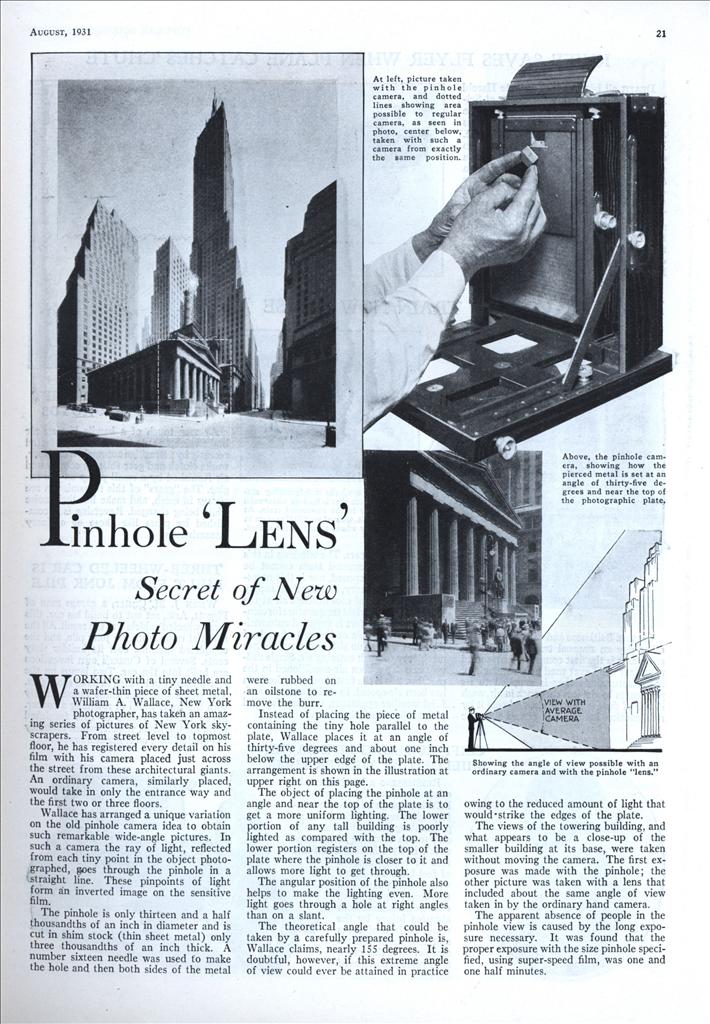 WORKING with a tiny needle and a wafer-thin piece of sheet metal, William A. Wallace, New York photographer, has taken an amazing series of pictures of New York skyscrapers. From street level to topmost floor, he has registered every detail on his film with his camera placed just across the street from these architectural giants. An ordinary camera, similarly placed, would take in only the entrance way and the first two or three floors.

Wallace has arranged a unique variation on the old pinhole camera idea to obtain such remarkable wide-angle pictures. In such a camera the ray of light, reflected from each tiny point in the object photographed, goes through the pinhole in a straight line. These pinpoints of light form an inverted image on the sensitive film.

Instead of placing the piece of metal containing the tiny hole parallel to the plate, Wallace places it at an angle of thirty-five degrees and about one inch below the upper edge of the plate. The arrangement is shown in the illustration at upper right on this page.

The angular position of the pinhole also helps to make the lighting even. More light goes through a hole at right angles than on a slant.

The theoretical angle that could be taken by a carefully prepared pinhole is, Wallace claims, nearly 155 degrees. It is doubtful, however, if this extreme angle of view could ever be attained in practice owing to the reduced amount of light that would strike the edges of the plate.

The views of the towering building, and what appears to be a close-up of the smaller building at its base, were taken without moving the camera. The first exposure was made with the pinhole; the other picture was taken with a lens that included about the same angle of view taken in by the ordinary hand camera.

The apparent absence of people in the pinhole view is caused by the long exposure necessary. It was found that the proper exposure with the size pinhole specified, using super-speed film, was one and one half minutes.