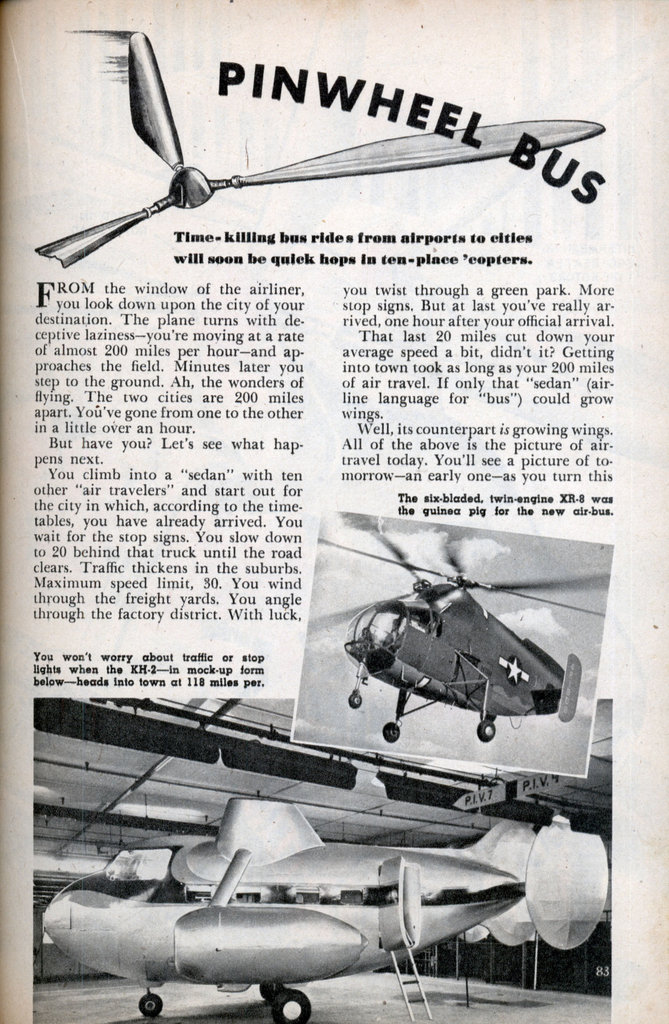 Time-killing bus rides from airports to cities will soon be quick hops in ten-place copters.

FROM the window of the airliner, you look down upon the city of your destination. The plane turns with deceptive lazinessâ€”you’re moving at a rate of almost 200 miles per hourâ€”and approaches the field. Minutes later you step to the ground. Ah, the wonders of flying. The two cities are 200 miles apart. You’ve gone from one to the other in a little over an hour.

But have you? Let’s see what happens next.

You climb into a “sedan” with ten other “air travelers” and start out for the city in which, according to the timetables, you have already arrived. You wait for the stop signs. You slow down to 20 behind that truck until the road clears. Traffic thickens in the suburbs. Maximum speed limit, 30. You wind through the freight yards. You angle through the factory district. With luck, you twist through a green park. More stop signs. But at last you’ve really arrived, one hour after your official arrival.

That last 20 miles cut down your average speed a bit, didn’t it? Getting into town took as long as your 200 miles of air travel. If only that “sedan” (airline language for “bus”) could grow wings.

Well, its counterpart is growing wings. All of the above is the picture of air-travel today. You’ll see a picture of tomorrowâ€”an early oneâ€”as you turn this page. The “pinwheel” bus is taking form in Kellett Aircraft’s plant in North Wales, Pennsylvania. It’s a helicopter, of course, and it’s called the KH-2. It will carry ten passengers, too, just as the sedans do. But there similarity ceases. Instead of crawling along through traffic, you’ll go over the building tops at a speed of 118 miles per hour. You’ll land on a city roof, possibly your own hotel, and slip down to the street in an elevator. That last 20 miles of post-arrival travel will become 15 minutes of fun instead of a boresome hour. The KH-2, which Kellett says will be ready for use in about eight months, will carry a total useful load of 2,942 lbs., and will have a gross weight of about 11,600 lbs. Range will be 180 miles.-C. B. Colby.