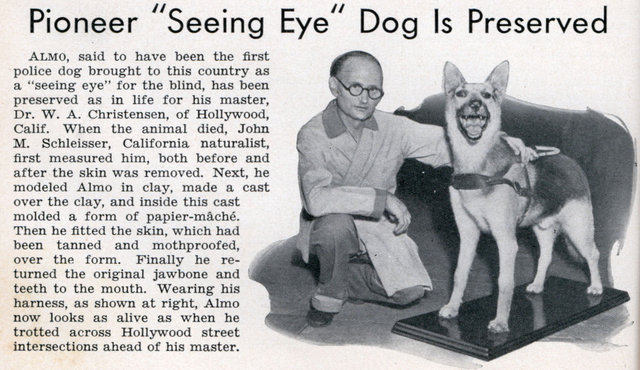 Almo, said to have been the first police dog brought to this country as a “seeing eye” for the blind, has been . preserved as in life for his master, Dr. W. A. Christensen, of Hollywood, Calif. When the animal died, John M. Schleisser, California naturalist, first measured him, both before and after the skin was removed. Next, he modeled Almo in clay, made a cast over the clay, and inside this cast molded a form of papier-mache. Then he fitted the skin, which had been tanned and mothproofed, over the form. Finally he returned the original jawbone and teeth to the mouth. Wearing his harness, as shown at right, Almo now looks as alive as when he trotted across Hollywood street intersections ahead of his master.