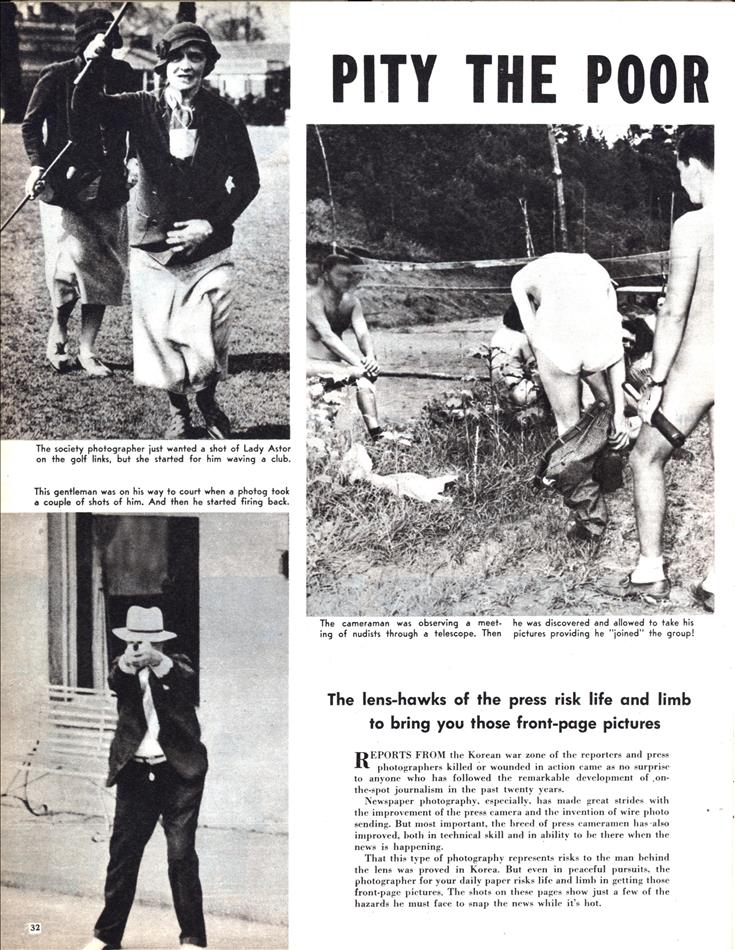 The lens-hawks of the press risk life and limb to bring you those front-page pictures .

REPORTS FROM the Korean war zone of the reporters and press photographers killed or wounded in action frame as no surprise to anyone who has followed the remarkable development of on-the-spot journalism in the past twenty years.

Newspaper photography, especially, has made great strides with the improvement of the press camera and the invention of wire photo sending. But most important, the breed of press cameramen has also improved, both in technical skill and in ability to be there when the news is happening.

That this type of photography represents risks to the man behind the lens was proved in Korea. But even in peaceful pursuits, the photographer for your daily paper risks life and limb in getting those front-page pictures. The shots on these pages show just a few of the hazards he must face to snap the news while it’s hot.

The society photographer just wanted a shot of Lady Astor on the golf links, but she started for him waving a club.

This gentleman was on his way to court when a photog took a couple of shots of him. And then he started firing back.

The cameraman was observing a meeting of nudists through a telescope. Then he was discovered and allowed to take his pictures providing he “joined” the group!

Robert Goelet charges a photographer who snapped his picture without asking permission. But the cameraman escaped.

A cameraman who tried to snap a shot of a couple of cigar-smoking women in Chicago got involved in this brawl. His buddy, another photographer, took this swell photo.

Lens-hawk who went along to cover serving of an eviction notice got his hair pulled. But he also got his pictures.

Death was the price the photographer paid for this picture of an aged prospector and his burro outfit in California. Cameraman was shot. This pic identified his killer.