This looks like it would be a lot of fun. 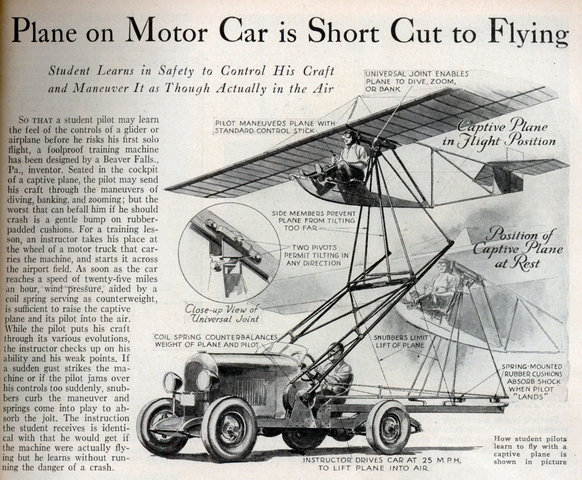 Plane on Motor Car is Short Cut to Flying

So that a student pilot may learn the feel of the controls of a glider or airplane before he risks his first solo flight, a foolproof training machine has been designed by a Beaver Falls., Pa., inventor. Seated in the cockpit of a captive plane, the pilot may send his craft through the maneuvers of diving, banking, and zooming; but the worst that can befall him if he should crash is a gentle bump on rubber-padded cushions. For a training lesson, an instructor takes his place at the wheel of a motor truck that carries the machine, and starts it across the airport field. As soon as the car reaches a speed of twenty-five miles an hour, wind pressure, aided by a coil spring serving as counterweight, is sufficient to raise the captive plane and its pilot into the air. While the pilot puts his craft through its various evolutions, the instructor checks up on his ability and his weak points. If a sudden gust strikes the ma-chine or if the pilot jams over his controls too suddenly, snub-bers curb the maneuver and springs come into play to absorb the jolt. The instruction the student receives is identical with that he would get if the machine were actually flying but he learns without running the danger of a crash.