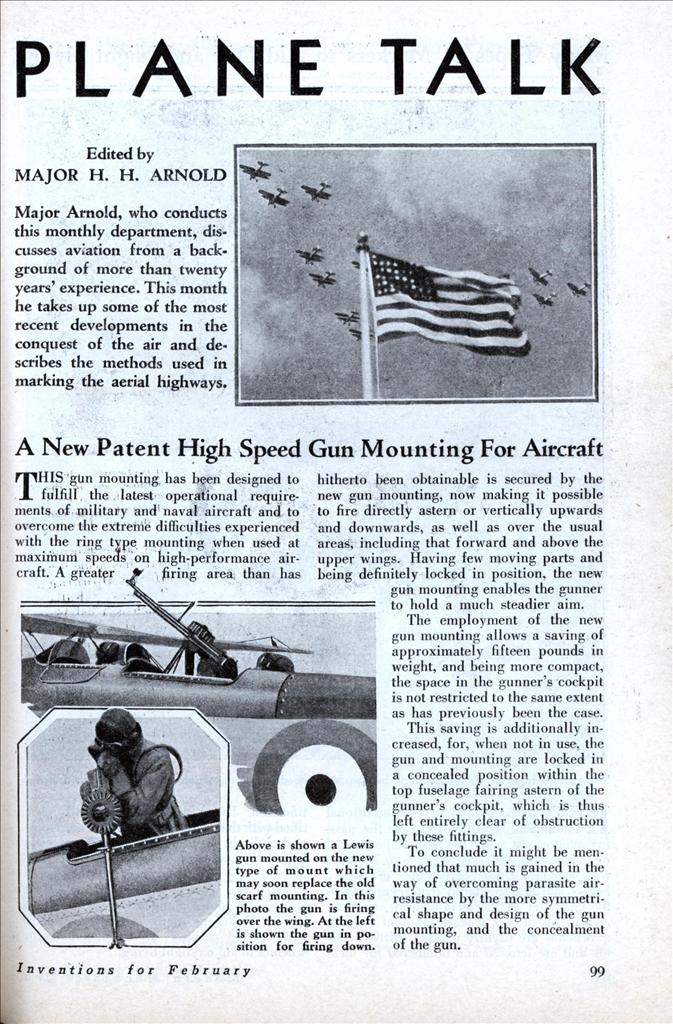 Major Arnold, who conducts this monthly department, discusses aviation from a background of more than twenty years’ experience. This month he takes up some of the most recent developments in the conquest of the air and describes the methods used in marking the aerial highways.

THIS gun mounting, has been designed to fulfill the latest operational requirements of military and naval aircraft and to overcome the extreme difficulties experienced with the ring type mounting when used at maximum speeds on high-performance aircraft. A greater firing area than has hitherto been obtainable is secured by the new gun mounting, now making it possible to fire directly astern or vertically upwards and downwards, as well as over the usual areas, including that forward and above the upper wings. Having few moving parts and being definitely locked in position, the new gun mounting enables the gunner to hold a much steadier aim.

The employment of the new gun mounting allows a saving of approximately fifteen pounds in weight, and being more compact, the space in the gunner’s cockpit is not restricted to the same extent as has previously been the case. This saving is additionally increased, for, when not in use, the gun and mounting are locked in a concealed position within the top fuselage fairing astern of the gunner’s cockpit, which is thus left entirely clear of obstruction by these fittings.

To conclude it might be mentioned that much is gained in the way of overcoming parasite air-resistance by the more symmetrical shape and design of the gun mounting, and the concealment of the gun.

Many Types of Markers to Aid Day and Night Flying

EVERY day that passes sees additional landmarks identified to guide the passing aviator. At night the most important of our airways are marked every 5 to 25 miles with beacons. These beacons have distinctive beams and are so placed that regardless of the character of the terrain flown over, the airman has always at least one light in sight. Beacons are usually painted brilliant colors and are lettered and numbered for identification. Towns and cities are usually identified with their names painted in large letters on buildings. Airdromes have their names in huge letters where they may readily be seen, and recently work has been started toward painting the names of the most important automobile routes along highways as shown above. Buildings along airways also have their roofs painted in distinctive color schemes to aid daylight flying.

SITTING on a frail cane-bottomed seat, his feet crossed underneath, while flying at 30 miles an hour in a wobbling airplane whose safety few trusted, Maj. H. A. Erickson 20 years ago made what is believed to be the first photograph ever taken from an airplane in flight. Major Erickson found the picture recently among his keepsakes.

With Charles K. Hamilton, then a famous pilot, Major Erickson took off from what is now a fairway on the Coronado Golf club and for 20 minutes flew at an altitude of 500 feet over San Diego bay and the nearby Pacific Ocean. With a German bellows camera, Erickson shot the now famous picture. It revealed a portion of the San Diego waterfront. During the war the original negative, which measured 3-1/4 by 4-1/4 inches, was stolen. The only print remaining was lost 12 years until Erickson found it recently.

Where today flying photographers “work” in enclosed planes that fly 150 miles an hour, Erickson made the first picture while sitting in the 30-mile-an-hour wind blast, directly in front of the pusher-type propeller.

ONE of the most interesting construction details on any of the airplanes at the Chicago races was that on one of the foreign entries—a retractable radiator. As shown at the right, the radiator, when retracted, makes a perfect stream line for the bottom of the fuselage and aids materially in increasing the speed. However, when the weather is hot or when the engine turns at full throttle the radiator is lowered to obtain the maximum cooling effect. The advantages of such a radiator on military and transport planes are obvious.

Sortie of the Recent Developments in the Aircraft Industry

THE roar of the exhaust of ever more powerful airplane engines has been increasing steadily until it has almost passed beyond the nuisance stage with those who are brought into close touch with aircraft, while to military and naval aviation it is a serious limitation on operations, as it proves an absolute barrier to surprise maneuvers. Therefore the invention of Miss Eldorado Jones, the first successful exhaust muffler for airplane engines, has been welcomed with open arms by the aviation industry. Her device, which resembles in appearance an ordinary Ford muffler, consists of a series of small pinwheels which “chew up” the sound waves and retard the passage of exhaust gases without creating undue back pressure upon the engine.

Flying Flivvers Receive the Attention of Many Designers

The “Flying Bathtub” is a glider with a detachable power plant which may be installed or removed in twenty, minutes. In tests with a 40 h.p. Salmson motor the ship took off in 20 feet and climbed to 22,000 feet in twenty minutes. It has a top speed of nearly 100 miles an hour and uses less than three gallons of gas an hour. Large scale production is planned for this ship which will sell for less than $1,000.

Another step in the same direction is the interchangeable fuselage of the glider designed by A. B. Green, of Los Angeles. In this job the lifting surfaces may be changed from the glider fuselage to the powered fuselage in a very few minutes.

William Nelsch, of St. Louis, has invented a real “Flying Flivver” which may be driven about the streets the same as an auto. It has an air and ground speed of 75 miles an hour. The wings may be folded up while the propeller is encased in a protection screening for safety on the ground.

H. Alfaro, a Cleveland engineer, has perfected a glider motor weighing less than fifty pounds which develops 27 h.p. The flying rowboat, designed by Frank Burt, of Clemonton, N. J., failed to rise from the water with its motorcycle engine, although it did 35 miles per hour on the surface.