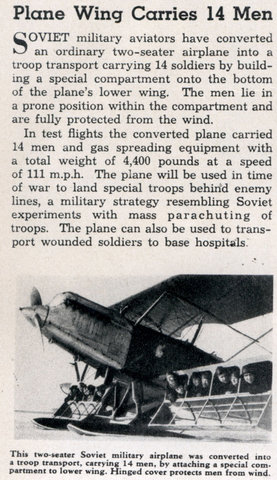 Plane Wing Carries 14 Men
SOVIET military aviators have converted an ordinary two-seater airplane into a troop transport carrying 14 soldiers by building a special compartment onto the bottom of the plane’s lower wing. The men lie in a prone position within the compartment and are fully protected from the wind.
In test flights the converted plane earned 14 men and gas spreading equipment with a total weight of 4,400 pounds at a speed of 111 m.p.h. The plane will be used in time of war to land special troops behind enemy lines, a military strategy resembling Soviet experiments with mass parachuting of troops. The plane can also be used to transport wounded soldiers to base hospitals.