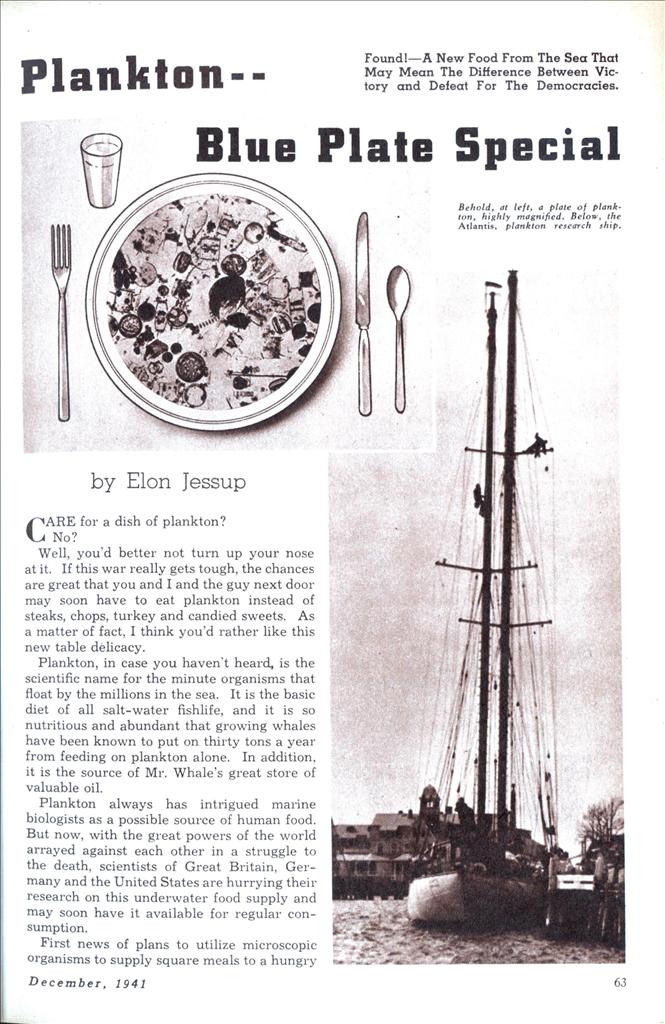 Found! — A New Food From The Sea That May Mean The Difference Between Victory and Defeat For The Democracies.

CARE for a dish of plankton?

Well, you’d better not turn up your nose at it. If this war really gets tough, the chances are great that you and I and the guy next door may soon have to eat plankton instead of steaks, chops, turkey and candied sweets. As a matter of fact, I think you’d rather like this new table delicacy.

Plankton, in case you haven’t heard, is the scientific name for the minute organisms that float by the millions in the sea. It is the basic diet of all salt-water fishlife, and it is so nutritious and abundant that growing whales have been known to put on thirty tons a year from feeding on plankton alone. In addition, it is the source of Mr. Whale’s great store of valuable oil.

Plankton always has intrigued marine biologists as a possible source of human food. But now, with the great powers of the world arrayed against each other in a struggle to the death, scientists of Great Britain, Germany and the United States are hurrying their research on this underwater food supply and may soon have it available for regular consumption.

First news of plans to utilize microscopic organisms to supply square meals to a hungry population, came several months ago from strictly-rationed Germany. Without enough fish to go around, Nazi scientists promised something as good, if not better. They explained the extreme nutritive value of plankton, their extraordinary richness in the oils which can satisfactorily substitute for many fats. It was felt the problems of how to catch and turn plankton into human food could be efficiently solved. Suggestions of a pump installation and separating process were advanced.

More recently, similar views have come from science on the other side. Britain’s Sir John Graham Kerr, one of the world’s leading zoologists, has asked the Britain Food Ministry to investigate the possibility of large-scale collection of plankton for consumption by farm stock and poultry as well as by people. He feels that new developments in mechanical separators have brightened the outlook on the practical problem of utilizing plankton.

Nor is the United States remaining idle amid all the sudden ado over plankton. Intensive research is going ahead on both the Atlantic and Pacific coasts. The attack of American scientists in learning more about plankton’s importance in our food program for the future is less direct than in Europe. Here emphasis is being placed less on plankton as diet for human beings than on the relationship between plankton and our fish supply.

But the extreme importance of this angle is obvious in view of New England’s nationally-needed fish supply. Plankton research has even provided an answer to the puzzled questions arising when a five-hundred-million-pound annual catch of fish toboggans mysteriously.

Scientific investigation may discover that hauls have declined at George’s Bank, for example, where fishermen have habitually gone because the fish congregate in that relatively small patch of the ocean to feed and breed.

Why there? Because the “pasturage”‘ plankton is good, the scientists reply. Young haddock in common with many other fish and whales feed on plankton. No plankton—no haddock.

The investigators then remind inquirers of the rip-snorting buster of a storm that swept over the banks in early spring. Eggs of breeding fish and the pasturage were scattered far and wide. Increasing the seriousness of the situation was the fact that the pasturage was at its most promising period of growth.

Unlike bottom-living creatures of the sea, plankton cannot live without the sun. This, and the fact that plankton die whenever the available supply of fertilizing nitrates and phosphates runs thin, are reasons why plankton are termed “grass” or “pasturage.”

As in the case of land grass, spring is the season of full and luxuriant plankton growth. Summer brings drought. The race by then has used up much of the nitrate and phosphate supply available. Mortality among the drifting plankton becomes enormous. Fish grow lean. In the fall a new crop of plankton makes its appearance a billion-fold and fish feed heavily once more.

Surprising to many persons is the knowledge that the masses of tidal vegetation familiar to everyone who visits the sea are inconsequential to the life of sea fish in comparison with this food that can’t be seen, the plankton aimlessly drifting offshore.

Additional facts are being constantly added to America’s store of plankton data by workers at the important Oceanographic Institution at Woods Hole, Mass., Atlantic coast headquarters of research in this field.

Indicating the importance of this work are the huge sums already invested in specialized equipment and years of experiment. Every now and again the tall-masted ketch Atlantis, largest in the world, literally a floating laboratory, puts to sea with its plankton-collecting gear for a cruise off George’s Banks or elsewhere.

Cone-shaped nets of various sizes, from about two feet to 20 feet in diameter, predominate in the equipment. Some are silk, others gauze. Some are especially designed with a mouth that will automatically clamp shut after sinking to a specific depth of water. An accurate sample of plankton life at that particular depth is thereby obtained without plankton from other depths seeping in.

Gauze nets trap plankton that run to the major in size but not the far more numerous small fry. For these tight-woven silk is brought into use, but myriads of yet smaller organisms still slip through. These extremely small plankton, Peridians, can be trapped only by the lowering of water bottles that automatically close at a desired depth. Contents are later studied under the microscope, and even counted.

Even those to whom the word plankton is unfamiliar know some planktonic giants like the jelly-fish; others are shrimp-like creatures and the larvae of crabs, starfish, and sea-urchins. Nearly everyone has come to know the nutritive richness and good flavor of this type of fish from eating crustaceans like shrimp, lobsters, etc.

Most impressive of the variegated plankton-collecting tools at Woods Hole is a 150-pound all-metal object looking like a submarine model with airplane wings (see illustration). Inside it is a small machine operated by the force of being towed behind the ketch.

This netting contraption consists of a gearbox, spooled gauze netting, driving rollers, and formalin tanks that automatically preserve the catch.

Some hauls are made from the sea’s surface, others from different depths. To get a depth sample, a cable is unleashed with a lead sinker weighing 200 to 1,500 pounds. Varying depth samples disclose strata of plankton like veins in a mountain of rock.

Continued sampling has revealed that certain groups originated in given localities of the ocean. Curiously, though devoid of means of locomotion, plankton are discovered to be great globe-trotters. Sub-tropical natives of South Atlantic waters hop aboard the Gulf Stream and are carried gaily into the chilly North Atlantic, even seeming to thrive on the change in environment.

Some of the richest existing swarms of plankton life are far to the north. If the present experimental collecting should develop into mass-collecting for human consumption, both the North Atlantic and North Pacific would furnish abundant hauls. The Nazis will find slim pickings in the Baltic sea—now a Nazi lake—however, experts say.