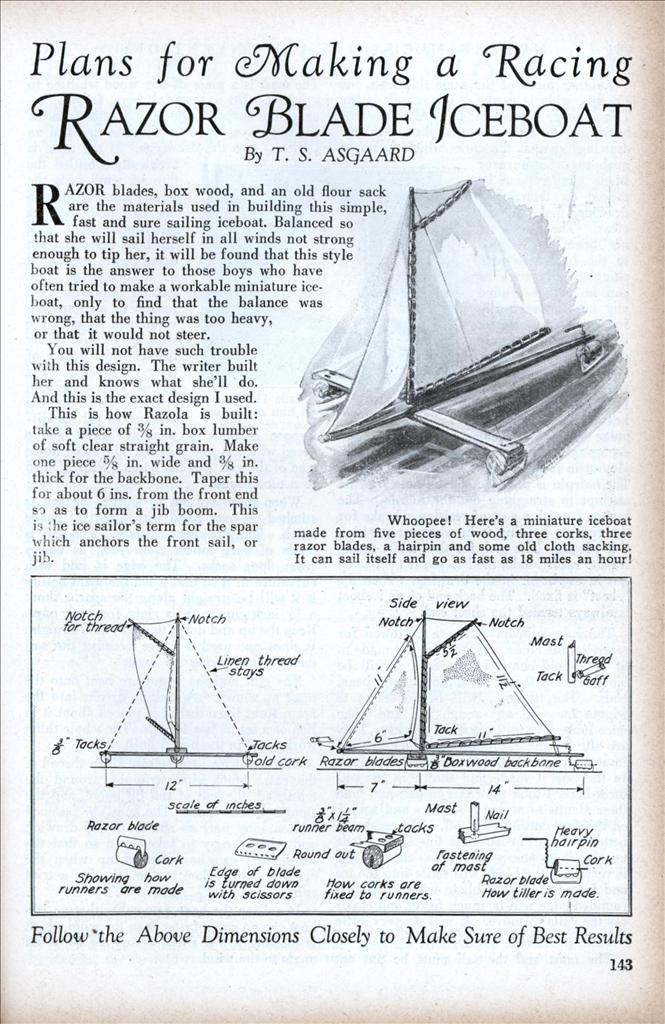 RAZOR blades, box wood, and an old flour sack are the materials used in building this simple, fast and sure sailing iceboat. Balanced so that she will sail herself in all winds not strong enough to tip her, it will be found that this style boat is the answer to those boys who have often tried to make a workable miniature iceboat, only to find that the balance was wrong, that the thing was too heavy, or that it would not steer.

You will not have such trouble with this design. The writer built her and knows what she’ll do. And this is the exact design I used.

This is how Razola is built: take a piece of 3/8 in. box lumber of soft clear straight grain. Make one piece 5/8 in. wide and 3/8 in. thick for the backbone. Taper this for about 6 ins. from the front end so as to form a jib boom. This is :he ice sailor’s term for the spar which anchors the front sail, or jib.

Another piece of the same thickness, but 1-1/8 ins. wide is used for the runner beam. This runner beam is tapered from the backbone to each end as shown in the drawings so that the corks which form the anchorages for the razor blade runners can be tacked on later. The drawings make this all clear. Then the runner beam is fastened to the backbone with shingle nails such as can be found around any new house building, and these are bent over so as to firmly clinch the two pieces.

In the back end of the backbone a small hole is drilled for the heavy hairpin which holds the rudder blade. A knife slit will do for this, but as the hairpin is apt to joggle out in rough ice it is best to have a hole. The hairpin is put through the hole with no attempt to straighten out the humps. The humps furnish a sort of resistance brake for the rudder, holding it in whatever position it is placed. The cork for the rudder is slit for the razor blade, the hairpin is bent to be put in as shown in the drawing. Then the “sheet” is fixed. The back end of an iceboat is always termed the sheet end.

The runner beam ends are hollowed for receiving the corks. If they are not made to fit the round shape of the cork it will be hard to keep the corks nailed to the beam ends. The tendency will be for them to wiggle loose in any rough ice, and when once loose they will come off quickly. They are slit for the razor blades, which are put in at an angle as indicated on the drawings. In the boat I made and shown in the pictures here, I took the razor blades and held them slantwise across a scissors and rounded the fine cutting edge off. This makes a better ice boat, because the fine sharp blade usually is so sharp that unless the weather is very cold the blade will settle into the ice and freeze there. A blade with a scissors-rounded edge will be much faster and easier for the sails to move. It will do very little sidewise drifting.

The mast and the sail must be put on.

The mast is a piece of box wood whittled to a round. Do a good job here, friends, because the shape of the mast just in front of the sail has a lot to do with the speed of an iceboat. See the drawings. If the mast is crookedly whittled the flow of wind onto the sail is interrupted and the sail will not be nearly so efficient. This has been learned from experiments conducted in Germany by those iceboat fans who have looked to airplane development so as to see what they could do by bettering the design of their iceboats. They found that a smooth spar in front of the sail makes all the difference between a winning speed and a speed which is just moving. The same holds true of the gaff and the boom. Whittle them to a nice round.

When these are cut to length, the sail is stitched on over hand with a sort of canoe stitch. The drawings explain. The sail is made of soft cotton cloth such as comes from flour sacks. The edge is laid with curvature in it so that when the wind bellies it it will be straight along the spar. About a 1/4 inch curvature is right for each edge. Keep the up and down the mast side straight. It does not need a curve because the sail doesn’t bend along the mast.

The gaff and the boom are bent onto the mast as shown. A tack is driven into the mast, stout linen thread is placed about it in lieu of a set of jaw fittings. The whole thing works well in the boat I built.

The guy wires are merely linen thread of the extra stout kind wrapped around the masthead, the end of the jib boom, and the runner beam ends. The mast is fastened with a long nail as shown in the drawing and will be easy to take down so that the whole sail can be wrapped up when the craft is being taken to the lake for a trial spin.

In sailing the boat, remember that an iceboat can go much faster than the wind which is pushing it. It slides across the ice at an angle to the wind