Wouldn’t the noise of it’s own passage mask any sound an engine would make? 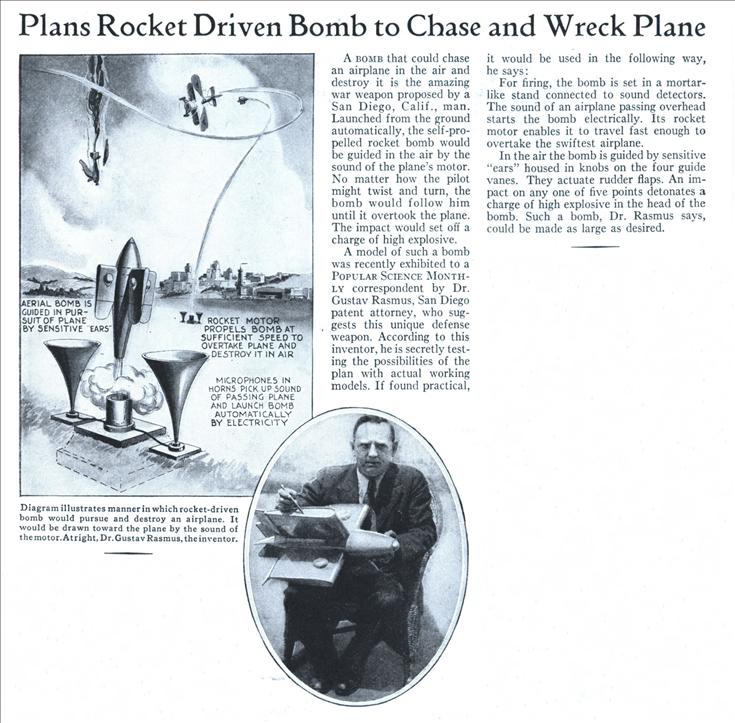 A bomb that could chase an airplane in the air and destroy it is the amazing war weapon proposed by a San Diego, Calif., man. Launched from the ground automatically, the self-propelled rocket bomb would be guided in the air by the sound of the plane’s motor. No matter how the pilot might twist and turn, the bomb would follow him until it overtook the plane. The impact would set off a charge of high explosive.

A model of such a bomb was recently exhibited to a Popular Science Monthly correspondent by Dr. Gustav Rasmus, San Diego patent attorney, who suggests this unique defense weapon. According to this inventor, he is secretly testing the possibilities of the plan with actual working models. If found practical, it would be used in the following way, he says:

For firing, the bomb is set in a mortarlike stand connected to sound detectors. The sound of an airplane passing overhead starts the bomb electrically. Its rocket motor enables it to travel fast enough to overtake the swiftest airplane.

In the air the bomb is guided by sensitive “ears” housed in knobs on the four guide vanes. They actuate rudder flaps. An impact on any one of five points detonates a charge of high explosive in the head of the bomb. Such a bomb, Dr. Rasmus says, could be made as large as desired.