Popular Science
Issue: Nov, 1939
Posted in: General
4 Comments on Planting the Stars and Stripes in the Antarctic (Nov, 1939)

Planting the Stars and Stripes in the Antarctic (Nov, 1939) 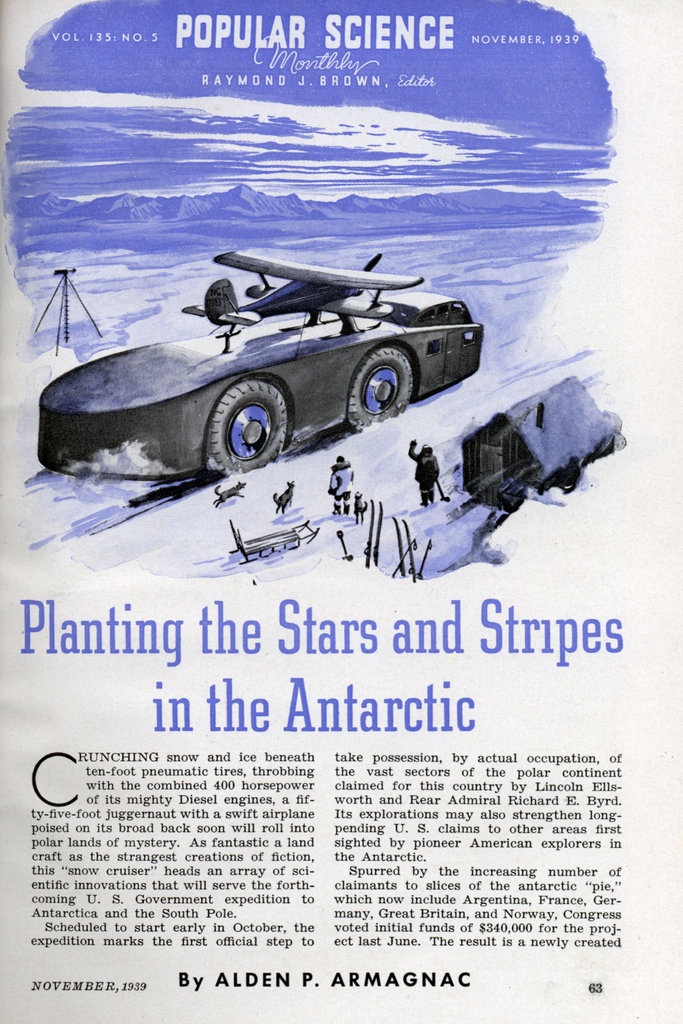 Planting the Stars and Stripes in the Antarctic

CRUNCHING snow and ice beneath ten-foot pneumatic tires, throbbing with the combined 400 horsepower of its mighty Diesel engines, a fifty-five-foot juggernaut with a swift airplane poised on its broad back soon will roll into polar lands of mystery. As fantastic a land craft as the strangest creations of fiction, this “snow cruiser” heads an array of scientific innovations that will serve the forthcoming U. S. Government expedition to Antarctica and the South Pole.

Scheduled to start early in October, the expedition marks the first official step to take possession, by actual occupation, of the vast sectors of the polar continent claimed for this country by Lincoln Ellsworth and Rear Admiral Richard E. Byrd. Its explorations may also strengthen long-pending U. S. claims to other areas first sighted by pioneer American explorers in the Antarctic.

Spurred by the increasing number of claimants to slices of the antarctic “pie,” which now include Argentina, France, Germany, Great Britain, and Norway, Congress voted initial funds of $340,000 for the project last June. The result is a newly created Government bureau, the U. S. Antarctic Service, with Admiral Byrd as its head. Leading a party of 160 men, he will establish three semipermanent bases in antarctic wastes now inhabited only by penguins and seals. Each year new “colonists” will be sent to relieve their predecessors, on the principle that continued occupancy affords the best claim to new land. Formal annexation of American zones in Antarctica may come at a later dateâ€” perhaps after an international commission has settled conflicting claims, and fixed boundary lines, by joint agreement or arbitration. The territory to which our claims are undisputed, alone, would add an area vaster than Alaska to U. S. domains.

Why do we want this frigid land? Not only to protect our whaling interests, and to establish weather observatories that would prove an invaluable aid to long-range forecasting. Coal resources second only to those of the United States, together with oil, copper, nickel, and tin, await those who develop Antarctica. Air bases, both commercial and naval, may be established one of these days on the polar continent. Only about 575 nautical miles, a few hours’ flight for either a clipper plane or a bomber, separate the tip of South America from Palmer Land in the Antarctic. That lends point to our objective of extending the Monroe Doctrine, and forestalling the encroachment of foreign powers in the Western Hemisphere, clear to the pole.

Lessons learned by past expeditions will aid the present one. One hazard formerly faced by polar pilots, returning to their bases, was sudden snow or fog that cut visibility almost to zero. This time they will follow the beam of a miniature radio transmitter back to the base camp, like a commercial airliner making port.

Sledge dogs drugged with opiates, each in its aluminum crate, will be flown to points far inland. Noise and strangeness of airplane flight drove the high-strung animals insane with fear, when a previous expedition tried transporting them by air. Humane use of “knock-out drops” will now permit the time-saving transportation expedient.

Six Army tanksâ€”without gunsâ€”will accompany the new expedition. Tractors for hauling sledge loads of food and supplies were introduced in the Antarctic by the Byrd expedition of 1933-35. Tanks, with their longer and wider treads, are expected to prove better yet.

But the giant 45,000-pound, $150,000 “snow cruiser” will be something absolutely unprecedented in polar exploration. As described by the modern Jules Verne . who designed itâ€”Dr. Thomas C. Poulter, senior scientist and second in command of Byrd’s last expeditionâ€”it will carry four men, a year’s supply of food, and fuel for 5,000 miles. The property of the Research Foundation of Armour Institute of Technology, who lent it to the Government, it carries an airplane and can penetrate within easy flying distance of any point on the Antarctic Continent. At each trip, its plane will cut a swath 500 or 600 miles wide through unexplored regions.

As tentatively planned, the route of the snow cruiser will take it at least twice to the South Pole, during a crisscross tour of Antarctica. On level stretches it will “cruise” at ten or twelve miles an hour, keeping one of its two Diesels in reserve. It will have a top speed of twenty-five miles an hour. Capable of climbing a thirty-five-percent grade, it will have no trouble traveling to the great central plateau of Antarctica, 11,000 feet above the sea.

A single pilot drives the snow cruiser. From his control room he can apply Diesel-electric power, through individual electric motors, to any combination of one to four wheels. Hydraulic steering controls will turn front and rear wheels in opposite directions, giving a turning radius of only thirty feet. To sidestep an obstacle, front and rear wheels may also be turned the same way.

One of the greatest problems of antarctic explorersâ€”gaping crevasses in the snow and ice, which have held up parties for days while they sought a safe passageâ€”is solved by the snow cruiser. Through another ingenious adjustment of its wheels, it may be driven straight over fissures as wide as fifteen feet. On reaching such a gap, the cruiser stops and retracts its front wheels, lowering its forward end upon sledlike runners. The back wheels then propel the cruiser halfway across the gap. Here the process is reversed, the front wheels being lowered and the rear ones retracted. Finally the rear wheels are lowered and the cruiser proceeds.