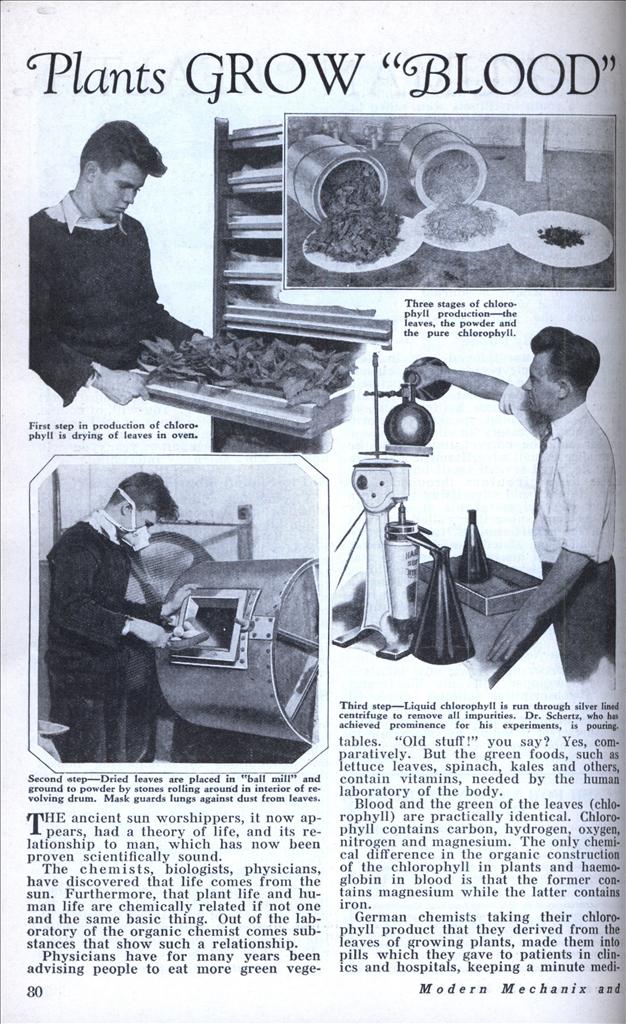 THE ancient sun worshippers, it now appears, had a theory of life, and its relationship to man, which has now been proven scientifically sound.

The chemists, biologists, physicians, have discovered that life comes from the sun. Furthermore, that plant life and human life are chemically related if not one and the same basic thing. Out of the laboratory of the organic chemist comes substances that show such a relationship.

Physicians have for many years been advising people to eat more green vegetables. “Old stuff!” you say? Yes, comparatively. But the green foods, such as lettuce leaves, spinach, kales and others, contain vitamins, needed by the human laboratory of the body.

Blood and the green of the leaves (chlorophyll) are practically identical. Chlorophyll contains carbon, hydrogen, oxygen, nitrogen and magnesium. The only chemical difference in the organic construction of the chlorophyll in plants and haemoglobin in blood is that the former contains magnesium while the latter contains iron.

German chemists taking their chlorophyll product that they derived from the leaves of growing plants, made them into pills which they gave to patients in clinics and hospitals, keeping a minute medical record of results. These pills, which may well be called “concentrated sunshine,” produced amazing results. The facts, as recorded in the unemotional, matter-of-fact statements of the German scientists, would show that these chlorophyll pills reduced high blood pressure, eliminated anemia, made weak men strong, cured digestive troubles, and seemed to be in fact, a pill of youth.

Once in the digestive stream chlorophyll immediately enriches the blood. The red blood cells immediately increase in number while their haemoglobin content rises. (Hemin, of the blood, and chlorophyll, are practically identical.) The blood thus enriched and reinforced with new life is able to bring about amazing recoveries.

The eating of green foods is taking chlorophyll into the body’s chemical laboratory, but the taking of a concentrated form is merely a short cut in giving the body a tremendous amount of it and the reaction is positive. The sunshine that the plant caught and benefited by is thus passed on in the form of blood-life for the human being.

Dr. Schertz, an eminent American chemist, suggests that chlorophyll gives us the clue as to just what life is. He has found a way to extract pure chlorophyll from plants easily and cheaply enough so that it can be used commercially, although he was not the first to isolate it.

The humanly useful place of chlorophyll is explained as the one link of nature for the converting of energy into matter. The energy reaches the earth in the form of sunlight and cosmic rays. By some mysterious process this energy is transformed in the plant into matter. The chlorophyll plays the chief role.

tain you are catching the gold. And as you wash out rough material in the hopper of any of these outfits, keep alert for chunks of quartz containing free gold; that might indicate a lode mine up-creek.

These are simple, low-cost hand-operated, home-made pieces of placer working equipment that increase your efficiency from 6 to 12 times above panning. Your original prospector’s outfit will cost less than $5; these machines should not cost more than $15 more. On $1 ground two men can make expenses or better if they are willing to work at sluice, torn or rocker.

One important warning; always be sure you are to true bedrock, for the richest gravel is right atop the rock and pockets or old crevices overlooked by early miners may be the richest spot on your claim.

In our next article we will give information regarding the low-cost, highly efficient, portable, ready-to-go outfits called “placer machines” which will double each man’s capacity and efficiency over cradle, sluice or long torn. One such machine has a record of producing about $1,200 per month in rich ground. We are going to give the information regarding these machines because the man who has cleaned up a little “stake” by pan or sluice can take another step ahead in building up to good returns by using some of his capital to increase efficiency of each worker. Also in the next issue we will tell of the “dry washer” used on placers in the desert.

Grow “Blood” for Human Health Dr. Schertz’s extraction of pure chlorophyll is the result of 12 years of experimentation. He has produced this essence of concentrated sunshineâ€”so closely aligned to the blood itselfâ€” on the largest scale ever known. His apparatus consists of an electric drying oven, a “ball mill,” a “screening machine,” a silver-coated separator of the super-centrifuge type, and a group of large funnels, pyrex tubes, almost twice as tall as a man, and numerous flasks.

“My very first step,” explains Dr. Schertz, “is to select a desirable kind of leaf or plant. The kinds of plants most used in my tests, are blue-grass, spinach, cow-peas, or stinging nettles.

“My next step is to have the entire plant structure cut clear down to the ground. Whereupon the stems, leaves and all are placed on a tray in an electric drying oven where they remain for from 12 to 24 hours. Next the dried leaves and stems, along with a supply of stones, are placed in what is known as a ‘ball mill,’ and ground into a fine powder, which then is separated from the coarser stem material by a ‘screening machine.’ “Next comes the extraction process. The leaf powder is soaked in acetone and run through a large funnel where the four pigments are extracted by the simple process of adding more acetone. The final stage is to run the liquid chlorophyll through a silver-plated separator of the centrifuge type, which removes all impurities, and results in a solid mass of almost pure chlorophyll in the bowl of the centrifuge.”