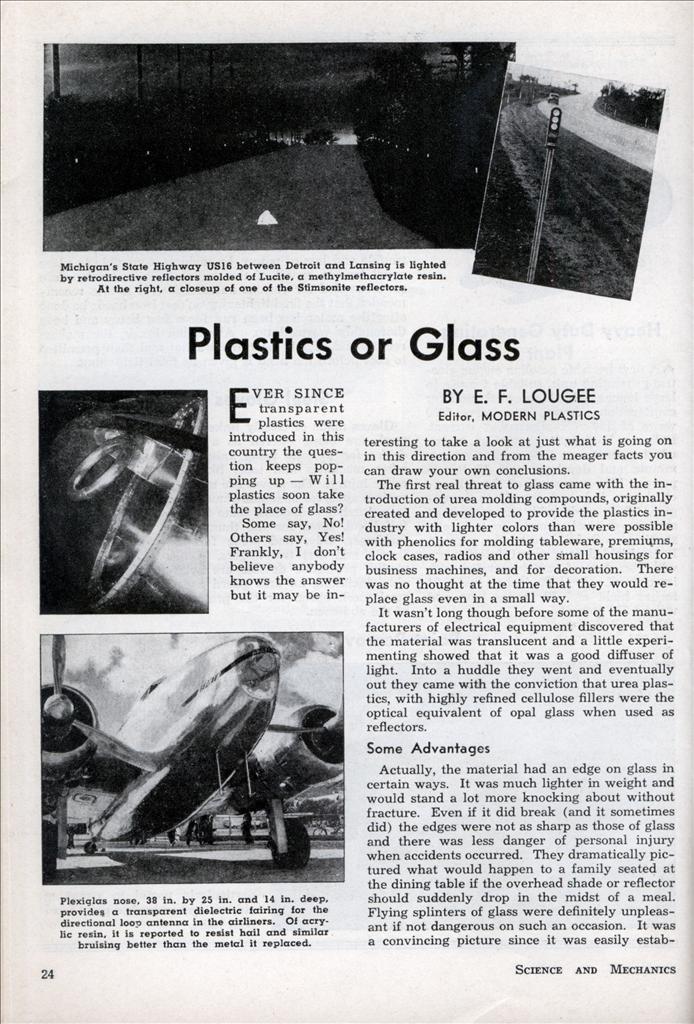 Ever since transparent plastics were introduced in this country the question keeps popping up — Will plastics soon take the place of glass?

Some say, No! Others say, Yes! Frankly, I don’t believe anybody knows the answer but it may be interesting to take a look at just what is going on in this direction and from the meager facts you can draw your own conclusions.

The first real threat to glass came with the introduction of urea molding compounds, originally created and developed to provide the plastics industry with lighter colors than were possible with phenolics for molding tableware, premiums, clock cases, radios and other small housings for business machines, and for decoration. There was no thought at the time that they would replace glass even in a small way.

It wasn’t long though before some of the manufacturers of electrical equipment discovered that the material was translucent and a little experimenting showed that it was a good diffuser of light. Into a huddle they went and eventually out they came with the conviction that urea plastics, with highly refined cellulose fillers were the optical equivalent of opal glass when used as reflectors.

Actually, the material had an edge on glass in certain ways. It was much lighter in weight and would stand a lot more knocking about without fracture. Even if it did break (and it sometimes did) the edges were not as sharp as those of glass and there was less danger of personal injury when accidents occurred. They dramatically pictured what would happen to a family seated at the dining table if the overhead shade or reflector should suddenly drop in the midst of a meal. Flying splinters of glass were definitely unpleasant if not dangerous on such an occasion. It was a convincing picture since it was easily established that should a plastic shade fall, no splinters would fly. About the most serious result would be upset cream or splashed gravy which wouldn’t really hurt anyone beyond the embarrassment to guests.

Urea reflectors began to appear on the market and it wasn’t long before the Illuminating Engineering Society —whose standard specifications for all lighting equipment permitted to carry the IES tag of approval had accomplished so much in providing better light for students and homes— changed its specifications that such shades must be made of “white diffusing glass” by adding the words “or its optical equivalent.” This let plastics in on one of the most popular developments of the time and it is now possible to obtain translucent plastics shades and reflectors of almost any size from the IES student lamp bowl, to a 26-1/2 inch reflector introduced about a year ago for office lighting.

With all this, it must be remembered that plastics are not glass but chemical compositions which have limitations even in this evidently successful application. Lighting engineers and manufacturers of electrical equipment are constantly faced with these limitations and must plan accordingly. Because wall thickness can be definitely controlled in a plastic shade or reflector, it is often possible to obtain better diffusion of light than can be expected of glass. On the other hand, if high-wattage bulbs are placed too close to the plastic material, it has a tendency to opaque, even decompose.

There isn’t space here to go further into this comparison of plastics with glass in the field of lighting although much can be said of the advantages of both materials, one over the other. The point is, that each in its place is a superior material and while during the past- few years there has been an ever – increasing use of plastics in lighting fixtures, glass is still being used for bottles — and for lighting fixtures as well.

Acrylic resins, which possess the same transparency and optical characteristics as quartz crystal, are actually more transparent than glass. They permit greater light transmission. Being less than half the weight of glass in comparable thickness, they were promptly accepted by aircraft manufacturers for cockpit hoods where they can be easily streamlined and reduce the danger of personal injury to pilots in case of accident. Bombing planes use them for better vision of their occupants, above and below. The Hindenburg had windows of this material throughout the ship.

Even though the material is more expensive than glass, it is worth its cost in aircraft where every ounce of reduced weight in the ship itself means an increased equivalent in its paying load. It is for this reason that molded plastic dishes and tableware is standard equipment on the passenger planes of most airlines.

Lenses for cameras and spectacles are being molded from transparent plastics with considerable success. They are the optical equivalent of any glass ever produced but they scratch more easily. Some progress has been made to overcome this handicap by hardening the surface, but even with this disadvantage it is comforting to those who wear glasses to know that should a lens become fractured there would be no splinters to fly. As a matter of fact, such lenses are practically unbreakable and will withstand a tremendous shock without shattering. I saw a pair of rimless spectacles dropped from a tenth floor window to the pavement below where they were retrieved with only a small nick in the edge of one lens. They are so light that they practically floated down with little impact when they finally reached the ground. If you want to try this, be sure that your glasses are not glass.

Perhaps the most recent and spectacular demonstration of the importance of these transparent resins is on Michigan’s state highway US-16 between Lansing and Detroit. Tiny reflectors on flexible posts placed at hundred-foot intervals beside the road, illuminate the highway sufficiently for perfectly safe night driving by reflecting the light from headlights on cars using the road. There is no glare, yet the headlights from a single car provide enough illumination so that the driver can see any object ahead within the range of danger. A man walking, a boy on a bicycle, a stalled truck without lights, will be clearly visible with no source of light other than the reflection of headlight rays picked up and thrown back on the road by these plastic reflectors. Maintenance costs are practically nil. Curves and hills are clearly indicated. Dangerous intersections can be marked with colored reflectors to give ample warning.

This particular job could not be done with glass because the retrodirective reflections which make it possible are accomplished by molding the plastic material in a metal form, so accurately machined that it couldn’t possibly withstand the heat at which glass must be poured.

And so we must end, with no answer to the question in sight. I think we can say, however, without contradiction that there is ample room in industry for both plastics and glass, each in its own application. But there is no doubt that plastics have safely reached first base.