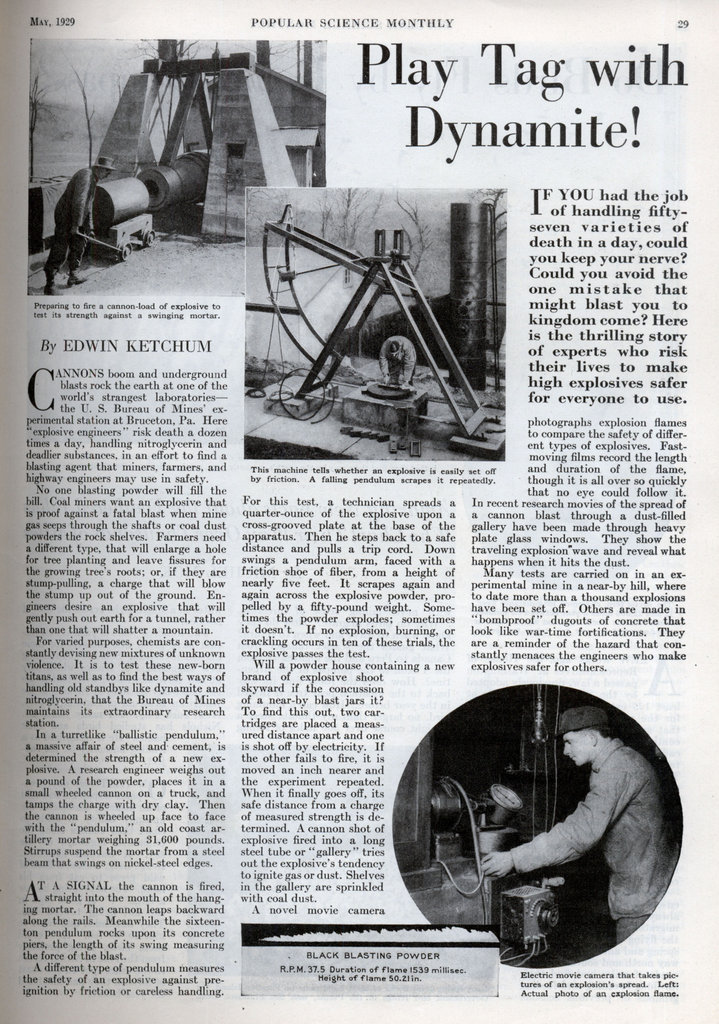 IF YOU had the job of handling fifty-seven varieties of death in a day, could you keep your nerve? Could you avoid the one mistake that might blast you to kingdom come? Here is the thrilling story of experts who risk their lives to make high explosives safer for everyone to use.

CANNONS boom and underground blasts rock the earth at one of the world’s strangest laboratoriesâ€” the U. S. Bureau of Mines’ experimental station at Bruceton, Pa. Here “explosive engineers” risk death a dozen times a day, handling nitroglycerin and deadlier substances, in an effort to find a blasting agent that miners, farmers, and highway engineers may use in safety.

No one blasting powder will fill the hill. Coal miners want an explosive that is proof against a fatal blast when mine gas seeps through the shafts or coal dust powders the rock shelves. Farmers need a different type, that will enlarge a hole for tree planting and leave fissures for the growing tree’s roots; or, if they are stump-pulling, a charge that will blow the stump up out of the ground. Engineers desire an explosive that will gently push out earth for a tunnel, rather than one that will shatter a mountain.

For varied purposes, chemists are constantly devising new mixtures of unknown violence. It is to test these new-born titans, as well as to find the best ways of handling old standbys like dynamite and nitroglycerin, that the Bureau of Mines maintains its extraordinary research station.

In a turretlike “ballistic pendulum,” a massive affair of steel and cement, is determined the strength of a new explosive. A research engineer weighs out a pound of the powder, places it in a small wheeled cannon on a truck, and tamps the charge with dry clay. Then the cannon is wheeled up face to face with the “pendulum,” an old coast artillery mortar weighing 31,600 pounds. Stirrups suspend the mortar from a steel beam that swings on nickel-steel edges.

AT A SIGNAL the cannon is fired, straight into the mouth of the hanging mortar. The cannon leaps backward along the rails. Meanwhile the sixteen-ton pendulum rocks upon its concrete piers, the length of its swing measuring the force of the blast.

A different type of pendulum measures the safety of an explosive against preignition by friction or careless handling.

For this test, a technician spreads a quarter-ounce of the explosive upon a cross-grooved plate at the base of the apparatus. Then he steps back to a safe distance and pulls a trip cord. Down swings a pendulum arm, faced with a friction shoe of fiber, from a height of nearly five feet. It scrapes again and again across the explosive powder, propelled by a fifty-pound weight. Sometimes the powder explodes; sometimes it doesn’t. If no explosion, burning, or crackling occurs in ten of these trials, the explosive passes the test.

Will a powder house containing a new brand of explosive shoot skyward if the concussion of a near-by blast jars it? To find this out, two cartridges are placed a measured distance apart and one is shot off by electricity. If the other fails to fire, it is moved an inch nearer and the experiment repeated. When it finally goes off, its safe distance from a charge of measured strength is determined. A cannon shot of explosive fired into a long steel tube or “gallery” tries out the explosive’s tendency to ignite gas or dust. Shelves in the gallery are sprinkled with coal dust.

A novel movie camera photographs explosion flames to compare the safety of different types of explosives. Fast-moving films record the length and duration of the flame, though it is all over so quickly that no eye could follow it. In recent research movies of the spread of a cannon blast through a dust-filled gallery have been made through heavy plate glass windows. They show the traveling explosion”wave and reveal what happens when it hits the dust.

Many tests are carried on in an experimental mine in a near-by hill, where to date more than a thousand explosions have been set off. Others are made in “bombproof” dugouts of concrete that look like war-time fortifications. They are a reminder of the hazard that constantly menaces the engineers who make explosives safer for others.