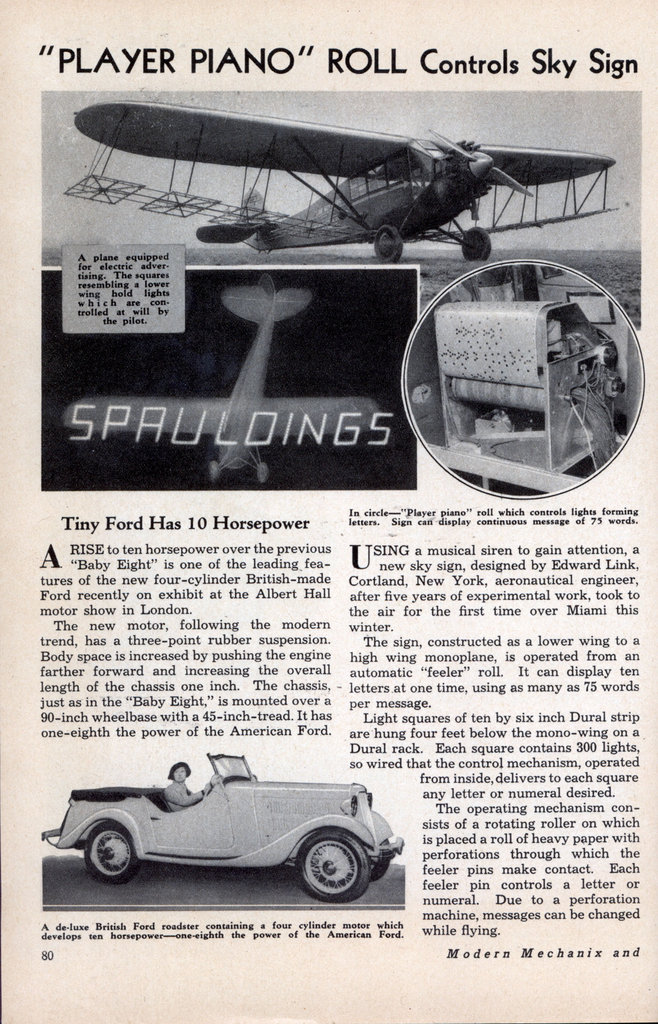 USING a musical siren to gain attention, a new sky sign, designed by Edward Link, Cortland, New York, aeronautical engineer, after five years of experimental work, took to the air for the first time over Miami this winter.

The sign, constructed as a lower wing to a high wing monoplane, is operated from an automatic “feeler” roll. It can display ten letters at one time, using as many as 75 words per message.

Light squares of ten by six inch Dural strip are hung four feet below the mono-wing on a Dural rack. Each square contains 300 lights, so wired that the control mechanism, operated from inside, delivers to each square any letter or numeral desired.

The operating mechanism consists of a rotating roller on which is placed a roll of heavy paper with perforations through which the feeler pins make contact. Each feeler pin controls a letter or numeral. Due to a perforation machine, messages can be changed while flying.

A RISE to ten horsepower over the previous “Baby Eight” is one of the leading features of the new four-cylinder British-made Ford recently on exhibit at the Albert Hall motor show in London.

The new motor, following the modern trend, has a three-point rubber suspension. Body space is increased by pushing the engine farther forward and increasing the overall length of the chassis one inch. The chassis, just as in the “Baby Eight,” is mounted over a 90-inch wheelbase with a 45-inch-tread. It has one-eighth the power of the American Ford.