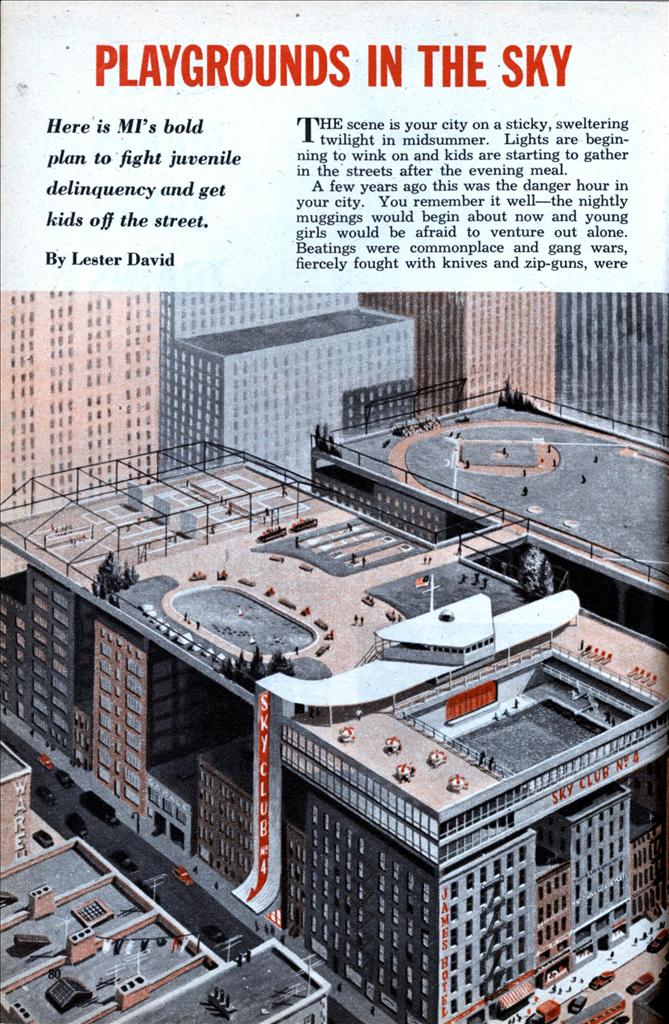 PLAYGROUNDS IN THE SKY

Here is MI’s hold plan to fight juvenile delinquency and get kids off the street.

THE scene is your city on a sticky, sweltering twilight in midsummer. Lights are beginning to wink on and kids are starting to gather in the streets after the evening meal.

A few years ago this was the danger hour in your city. You remember it well—the nightly muggings would begin about now and young girls would be afraid to venture out alone. Beatings were commonplace and gang wars, fiercely fought with knives and zip-guns, were a frequent occurrence. But things are different now.

Look at the kids emerging from their homes. Instead of congregating at the candy store and pool parlor hatching * up new forms of violence out of boredom, they are now heading for the center of the block. They funnel into a large entrance and are swallowed up inside.

Follow them. They tile into elevators and are whisked upstairs. The doors open and they step into a fantasy land.

There, a few yards from the tenements where they live, on their very roofs, in fact, is a regulation-size baseball diamond with real springy turf! But the kids aren’t interested just now—they played ball all afternoon. Instead, they enter the locker room and in a few minutes are cavorting noisily in a big, broad and very cool swimming pool. Afterwards, they troop onto the ball field, where chairs have been set up, and watch a movie under the stars.

What’s it all about? “This magic land for kids doesn’t exist in my city,” you say. No, it doesn’t—yet!

But it darn well could! It could exist in your town and in hundreds of other communities throughout the nation. Every city could construct huge, all-encompassing playgrounds and recreation centers, using the enormous, readily available space now going completely to waste on the rooftops of their congested areas!

The erection of these play centers on the nation’s rooftops is Mi’s plan to counterattack juvenile delinquency. Granted, it’s a bold, dramatic proposition. It might also, at first glance, border on the impossible. Immense and breath-taking, yes—but impossible? We don’t think so at all.

Does the idea intrigue you? It should because teen-age terrorism is costing you many hundreds of additional tax dollars every year, not to mention the hours of worry for the safety of self, family and property.

Already a million youngsters get into trouble with the police every year. The Juvenile Delinquency Subcommittee of the Senate Judiciary Committee has just made the startling prediction in a report that by 1960 the figure will skyrocket to 2,250,000!

Listen again to the authorities: “If communities throughout the nation provided more wholesome recreational facilities for their young people, delinquency could be curtailed.” This comes from FBI chief J. Edgar Hoover and his conviction that recreation is a big answer is echoed by judges, child guidance experts and police officials from coast to coast.

MI believes the obvious solution is in rooftop playgrounds. No miracles of engineering are needed. Technically, with the know-how we possess right now, no insurmountable problem exists. Declares Henry Kohler, a prominent New York architect who is editor of the Bulletin of the Brooklyn chapter of the American Institute of Architects: “Certainly it can be done. Even though roofs are of different heights, even though some buildings are narrower than others, there is no limit to the size of the playground which can be built. You can build a gym up there or you can construct a center big enough for a baseball field, grandstand included!”

Mr. Kohler, who spent four years with the Seabees designing athletic areas of all types for military personnel in the South Pacific, points out that a 200×250-foot center would be ample to contain all the necessary facilities.

The floor would be a reinforced concrete slab built up from the highest level. Let’s explain: Suppose the site selected consists of five apartment houses—three of them five stories high, two only four stories high. From the top height of five stories, steel supports could be spanned horizontally, meeting similar supports which come up vertically from the lower height of four stories. The reinforced concrete floor is then constructed upon these supports.

The concrete slab would contain radiant heating units for two major reasons: this is the best way of heating a large area and no other plumbing for heating purposes would be necessary. And there is a third reason which the teen-agers would say leads all the rest: In the winter a refrigerant such as freon could be put into the tubing. This would freeze water and the kids would have themselves a fine skating rink.

Now suppose the roof area of the five apartment houses is too small—suppose the entire area just doesn’t add up to a 200×250 playground. Have we met an impasse? Not at all, says Mr. Kohler. The answer: Cantilever out. This means that horizontal supports are extended outward from the edge of the roof and cantilever supports are introduced from the sides of the building.

When the dust of construction work clears away, what will the finished product be like?

There would be a baseball field for the playing area. Wooden flooring could be applied in sections over the turf and in a short time the baseball diamond could be transformed into a basketball court, a floor for a track meet or a dance floor. Along the sides removable stands could accommodate hundreds of spectators for neighborhood tournament games.

There would be a swimming pool, showers, locker rooms and even a solarium. There could easily be an ice skating rink in winter, as previously explained, tennis and handball courts, a raised stage for amateur theatricals, ping-pong, shuffleboard and gymnasium equipment.

Off to the sides, behind huge folding doors, there could be separate, smaller rooms. These would be studios for arts and crafts, painting, sculpture, photography, music and rehearsals. There could be a wood and metal working shop, a library and study rooms.

Recently, four reform school teeners appeared before a youth forum in New York and, sitting behind a screen to protect their identities, advised their elders on how to deal with kids. Their unanimous conclusion: More young people would stay out of trouble if they were loved by their parents and “had decent l and interesting places to play after school.”

Anyone who has ever had a taste of the misery, degradation and boredom of an alley adolescence can testify that this is a realistic suggestion. The clincher came when the New York State Attorney General told the youths that their suggestion was the same as that offered by a panel of social workers and public officials not long before at a hearing on the problems of juvenile delinquency.

How about it? Had a bellyful of terror in your city’s streets? Then why not give rooftop playgrounds some long and serious thought? •