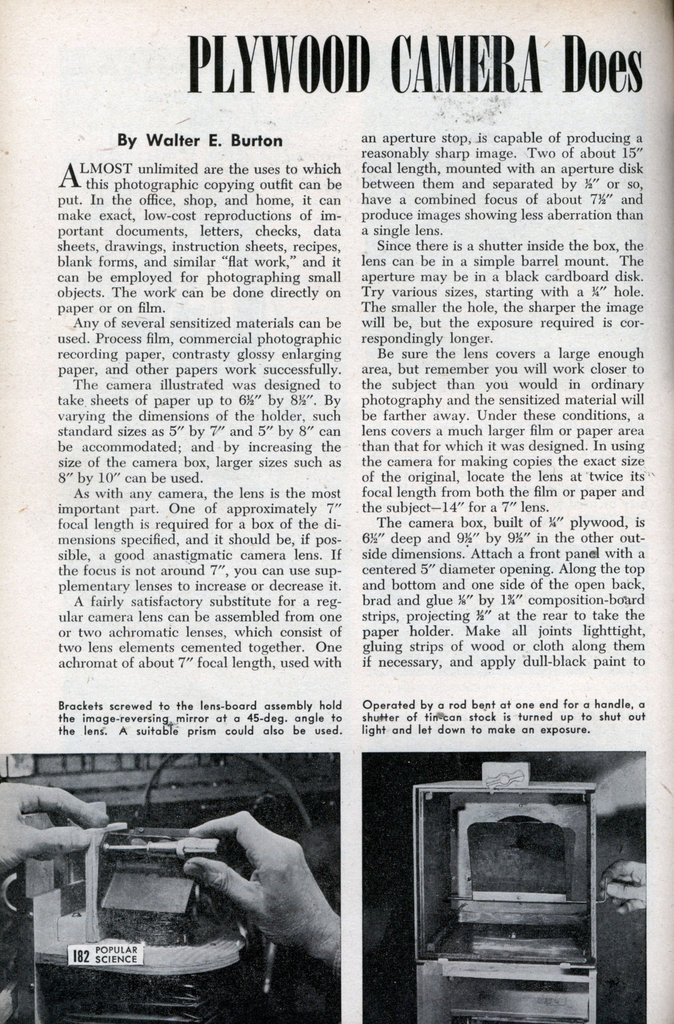 As with any camera, the lens is the most important part. One of approximately 7″ focal length is required for a box of the dimensions specified, and it should be, if possible, a good anastigmatic camera lens. If the focus is not around 7″, you can use supplementary lenses to increase or decrease it.

A fairly satisfactory substitute for a regular camera lens can be assembled from one or two achromatic lenses, which consist of two lens elements cemented together. One achromat of about 7″ focal length, used with an aperture stop, is capable of producing a reasonably sharp image. Two of about 15″ focal length, mounted with an aperture disk between them and separated by 1/2″ or so, have a combined focus of about 7-1/2″ and produce images showing less aberration than a single lens.

Since there is a shutter inside the box, the lens can be in a simple barrel mount. The aperture may be in a black cardboard disk. Try various sizes, starting with a 1/4″ hole. The smaller the hole, the sharper the image will be, but the exposure required is correspondingly longer.

Be sure the lens covers a large enough area, but remember you will work closer to the subject than you would in ordinary photography and the sensitized material will be farther away. Under these conditions, a lens covers a much larger film or paper area than that for which it was designed. In using the camera for making copies the exact size of the original, locate the lens at twice its •v focal length from both the film or paper and the subject—14″ for a 7″ lens.

The camera box, built of 1/4″ plywood, is 6-1/2″ deep and by in the other outside dimensions. Attach a front panel with a centered 5″ diameter opening. Along the top and bottom and one side of the open back, brad and glue 1/8″ by 1-3/4″ composition-board strips, projecting 1/2″ at the rear to take the paper holder. Make all joints lighttight, gluing strips of wood or cloth along them if necessary, and apply dull-black paint to all inside surfaces, the edges of the circular opening, and any other parts that might reflect light to the paper or film.

If any regular plate or sheet-film holders are on hand, the back may be modified to take them, but the paper holder shown is efficient, is easy to make, and holds all edges down so the paper can’t curl. Cut the plywood backing first and mark on it guide lines centered with respect to the opening in the back of the camera. These lines should mark off an area the size of the paper or film to be used. Attach .032″ aluminum or other thin-metal strips on three sides, and over each attach a second strip 1/8″ wider than the first to form channels for the paper. The open end is toward that end of the holder that will project at the side of the camera.

Put a three-sided wood frame around the metal strips, grooving the inside edge 1/8″ deep for a dark slide, which may be a sheet of .032″ aluminum. Allow 3/4″ extra length for a riveted split-dowel handle.

Build up a hinged slide guide of velvet-covered composition board and aluminum or other metal for the open end of the paper holder. Cover the inside surface of the composition-board strip with velvet cut to reach down over the edge and under the base. Glued down, this strip of velvet becomes a hinge- so the slide guide can be lifted up for insertion of paper. Spacers and a top strip, all covered with velvet, complete the guide. Two short pins made from cutoff nails engage the underside to relieve strain on the velvet hinge. Paint the inner surfaces of the holder dull black. The slide need not be painted. Two L-shaped metal clips on the bottom of the camera and a turn button on a block on the top keep the holder in place. Several holders can be made, one for each size paper or film.

Mount ground glass in a frame the size of the paper holder for use as a focusing screen. Have the ground side toward the lens, located in the same plane as the paper or film. Window glass can be ground for use with a paste of water and No. 120 aluminum oxide grains. Rub with a flat piece of metal or the bottom of a small bottle.

To reverse the image so it will reproduce naturally, mount an optically flat mirror or large right-angle prism in front of the lens on brackets attached to the lens board or sliding piece. A bellows can be taken from an old camera or enlarger, or one can be made from stiff paper, fabric, or leather, using a camera bellows as a pattern. Frame the open ends with wood and screw them to the lens board and the front of the camera.

Exposure may be controlled with a simple shutter consisting of a rod run through the box to work a leaf of tin-can material that closes or opens the circular hole in the front panel. The rod may go through 1″ behind and 1/4″ below the opening so the shutter will tilt against the front when closed and rest on the bottom when open. Bend one end for a handle. Paint the leaf and rod dull black. Exposures, a matter of seconds, may be timed with a watch. If you do not wish to make a shutter, exposures may be controlled by turning the lights on and off.

Mount the camera above a working table or base at a height sufficient for the desired range of reproductions. While the lens is twice its focal length from the subject for an exact-size reproduction, the distance must be increased for smaller copies. The camera shown is on a 14″ high platform mounted on a 1″ by 10″ by 28″ base.

A horizontal easel for supporting the subject may be made adjustable for height on four parallel pivoted arms and locked by tightening the screws in the ends of the arms. It is separate from the base and is centered simply by moving until the image is centered on the ground glass.

Lighting may be with one or two spotlights placed to illuminate the subject at an angle that won’t shine light directly into the lens. Or two photofloods in clamp-on reflectors may be attached to the platform uprights. Lighting should be even and can best be determined by test. Length of exposure is best established initially also by trial.