Police Planes Take Off From Car to Hunt Down Crooks (Aug, 1933) 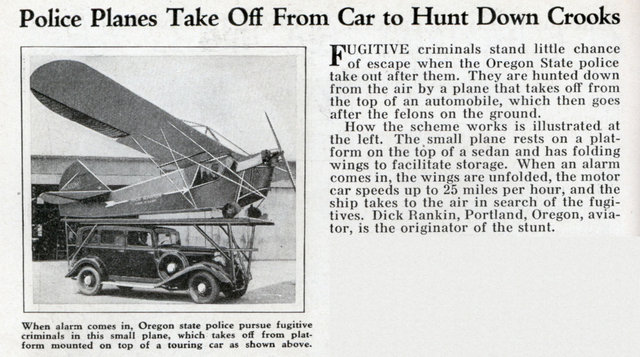 Police Planes Take Off From Car to Hunt Down Crooks

FUGITIVE criminals stand little chance of escape when the Oregon State police take out after them. They are hunted down from the air by a plane that takes off from the top of an automobile, which then goes after the felons on the ground.

How the scheme works is illustrated at the left. The small plane rests on a platform on the top of a sedan and has folding wings to facilitate storage. When an alarm comes in, the wings are unfolded, the motor car speeds up to 25 miles per hour, and the ship takes to the air in search of the fugitives. Dick Rankin, Portland, Oregon, aviator, is the originator of the stunt.