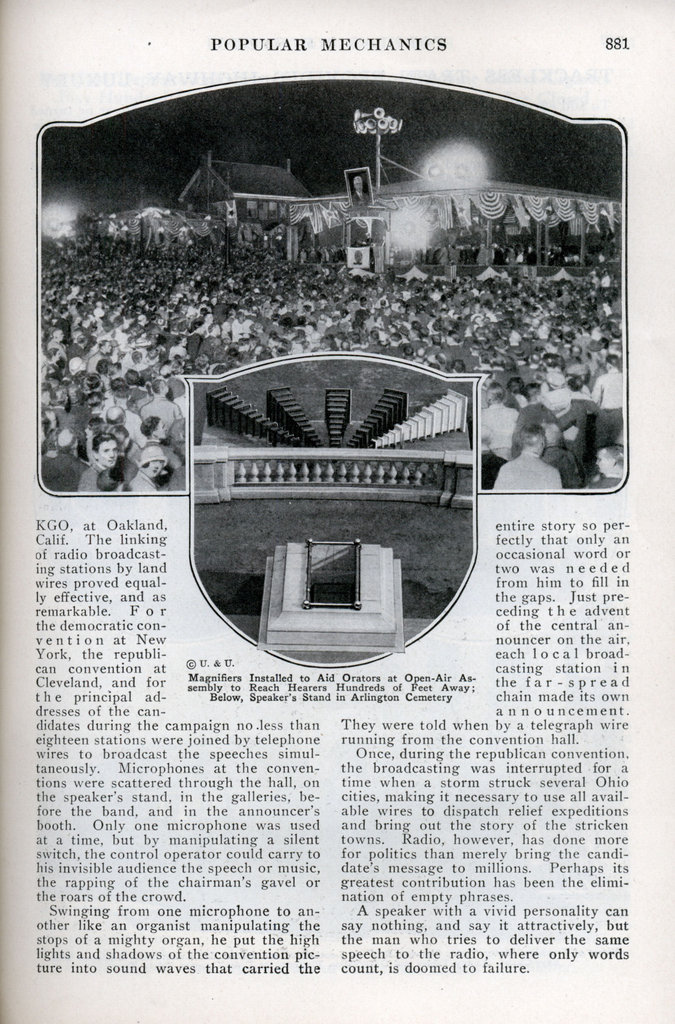 ONE hundred and ten million Americans will have the opportunity next March of listening to the inauguration of the first ruler of any nation to be chosen after a radio campaign. While thousands heard the three presidential candidates in person, millions more at some time or other during the campaign heard their voices over the radio, and that same opportunity will be extended when the inaugural address is delivered. The old – fashioned spellbinder climbed down off the stump in this campaign of 1924 and settled himself in front of a microphone, and incidentally some of the political speakers had to fit themselves to an entirely new form of public speaking. Picturesque and vivid personalities are lost on the radio audience. The speaker’s individuality counts for nothing, and what he says for everything when the listener is sitting a hundred or a thousand miles away. Words have displaced gestures as vote getters. In the past, no matter how poor the speaker, he usually found that the voters who were interested enough to turn out to hear him would stay to the finish; whether they liked his arguments or not. This year the voter had but to move a dial a fraction of an inch and pick up a jazz band or a dramatic recitation instead. Getting the radio message of the rival candidates for president before the nation involved a triumph of electrical ingenuity. Only four years ago, in the Harding-Cox campaign, the number of listeners who could hear a public speech had been raised from a few hundred within sound of the speaker’s voice, to many thousands, through use of the public-address system of amplifiers.

In four short years, the possible audience has leaped from thousands to millions through the development of radio broadcasting. Herbert Hoover estimates there are 5,000,000 radio-receiving sets in operation in the United States, with an average of three listeners for each. Other experts double those figures.

In the 1924 campaign, beginning with the political conventions in Cleveland and New York, radio, telephone and telegraph facilities were all linked together to carry the speeches from one end of the country to the other, and to England, too, if England cared to listen.

In the convention halls and about the platforms where the candidates addressed the crowds were amplifiers to enable 50,000 or more people, covering several acres of space, to hear every word of the speaker. From the platform delicate microphones carried the speech over telephone circuits to broadcasting stations in far distant cities, where it was put on the air for the listener-in at home.

In some of the broadcasting stations, besides the usual transmission over the customary wave lengths, the speeches were transformed into a short wave length, at high frequency, and distributed to distant stations, where they were picked up and rebroadcast on a wave length which receiving sets could pick up. The carrier wave of the short-wave high-frequency transmitter is inaudible to the average receiving set, and so did not interfere. In one case, a speech delivered in New York was broadcast through five stations, each getting the program out of the air on one wave length and putting it back on another. Station WJZ had its microphones on the speaker’s table and carried the program to the station by direct wire. There it was broadcast to listeners around New York city on a 455-meter wave length, while a lead from the amplifier panel carried it over a land wire to WGY, at Schenectady, N. Y.

From that wire WGY sent the program out through two different transmitters, one on the customary 360-meter length, and the other on the high-frequency 100-meter wave. This wave, inaudible to the listener-in, was picked up at station KDKA, at East Pittsburgh,and broadcast, once on the usual 326-meter length for listeners-in, and again at 98 meters, as a carrier wave to KFKX, a repeater station at Hastings, Nebr., and to 2-AC, in Manchester, Eng. The latter station was linked by wire with six other broadcasting plants, which in turn rebroadcast the speech to their immediate territory. At Hastings, Nebr., station KFKX again, transmitted the program on a listener-in wave, and also at 104 meters, to be picked up and rebroadcast once more by station KGO, at Oakland, Calif. The linking of radio broadcast KGO, at Oakland, Calif. The linking of radio broadcasting stations by land wires proved equally effective, and as remarkable. For the democratic con-vention at New York, the republican convention at Cleveland, and for the principal addresses of the candidates during the campaign no less than eighteen stations were joined by telephone wires to broadcast the speeches simultaneously. Microphones at the conventions were scattered through the hall, on the speaker’s stand, in the galleries, before the band, and in the announcer’s booth. Only one microphone was used at a time, but by manipulating a silent switch, the control operator could carry to his invisible audience the speech or music, the rapping of the chairman’s gavel or the roars of the crowd.

Swinging from one microphone to another like an organist manipulating the stops of a mighty organ, he put the high lights and shadows of the convention picture into sound waves that carried the entire story so perfectly that only an occasional word or two was needed from him to fill in the gaps. Just preceding the advent of the central announcer on the air, each local broadcasting station in the far-spread chain made its own announcement. They were told when by a telegraph wire running from the convention hall.

Once, during the republican convention, the broadcasting was interrupted for a time when a storm struck several Ohio cities, making it necessary to use all available wires to dispatch relief expeditions and bring out the story of the stricken towns. Radio, however, has done more for politics than merely bring the candidate’s message to millions. Perhaps its greatest contribution has been the elimination of empty phrases.

A speaker with a vivid personality can say nothing, and say it attractively, but the man who tries to deliver the same speech to the radio, where only words count, is doomed to failure.